In weeks 37-38, the majority of regions reported no influenza or influenza-like illness. In week 38, two regions in British Columbia reported localized activity, and 12 regions in British Columbia (1), Alberta (3), Saskatchewan (1), Ontario (3) and Quebec (4) reported sporadic activity. Consistent with the increased number of influenza detections this season, a greater number of regions are reporting sporadic activity compared to previous seasons. 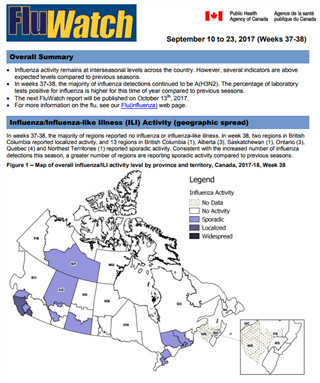 In weeks 37-38, the number of tests positive for influenza remained at interseasonal levels. The percentage of tests positive was low and remained at similar levels compared to the previous 2-week period (2.4% in week 38). The number and percentage of influenza A tests positive remains higher for this time of year than was observed during the previous seven seasons. Influenza B detections remain low and in keeping with previous seasons. For data on other respiratory virus detections, see the Respiratory Virus Detections in Canada Report.

To date this season, 166 laboratory-confirmed influenza detections have been reported, of which 90% have been influenza A. Influenza A(H3N2) has been the most common subtype detected this season, representing 79% of subtyped influenza A detections. Detections from BC and AB represent 66% of the cases reported in this 2-week period, with a further 25% from Ontario. For more detailed weekly and cumulative influenza data, see the text descriptions for Figures 2 and 3 or the Respiratory Virus Detections in Canada Report.

In week 38, 1.2% of visits to healthcare professionals were due to influenza-like illness, which follows the expected gradual increase for this time of year. The proportion of visits for ILI remains low, although it is higher than observed over the past five years.

To date this season, seven influenza-associated hospitalizations have been reported by participating provinces and territoriesFootnote 1 six of which were associated with influenza A, and all cases were adults 45 years of age or older.

During the 2017-18 season, the National Microbiology Laboratory (NML) has tested five influenza viruses for resistance to oseltamivir and zanamivir, and all viruses were sensitive. (Table 3)