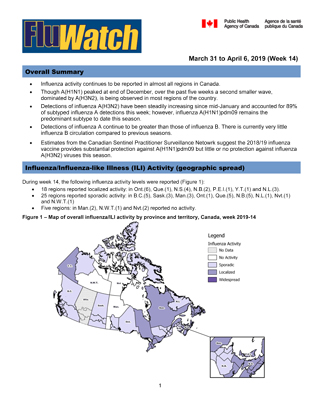 During week 14, the following influenza activity levels were reported (Figure 1):

In week 14, the following results were reported from sentinel laboratories across Canada (Figures 2 and 3):

To date this season, 42,104 laboratory-confirmed influenza detections have been reported:

To date this season, detailed information on age and type/subtype has been received for 33,953 laboratory-confirmed influenza cases (Table 1):

In week 14, 1.1% of visits to healthcare professionals were due to influenza-like illness (ILI) (Figure 4).

Among the 48 participants who reported fever and cough:

To date this season, 706 laboratory-confirmed influenza outbreaks have been reported (Figure 6):

To date this season, 145 ILI outbreaks have been reported; 81 occurred in LTCF, 59 in schools, one in other settings and four in acute care facilities.

To date this season, 2,845 influenza-associated hospitalizations have been reported by participating provinces and territoriesFootnote 1.

In week 14, 31 pediatric (≤16 years of age) hospitalizations with influenza have been reported by the Immunization Monitoring Program Active (IMPACT) network (Figure 7). Of the 31 hospitalizations, 21 (68%) were due to influenza A.

To date this season, 1,147 pediatric hospitalizations have been reported (Figure 8):

To date this season, 203 ICU admissions, and 10 deaths have been reported.

To date this season, 847 hospitalizations, 103 ICU admissions and 46 deaths have been reported (Figure 9):

Sequence analysis of the HA gene of the viruses showed that:

Influenza B viruses can be divided into two antigenically distinct lineages represented by B/Yamagata/16/88 and B/Victoria/2/87 viruses. The recommended influenza B components for the 2018-19 Northern Hemisphere influenza vaccine are B/Colorado/06/2017 (Victoria lineage) and B/Phuket/3073/2013 (Yamagata lineage).

The Seasonal Influenza Immunization Coverage Survey is an annual telephone survey conducted between January and February that collects information related to the influenza vaccine in Canada. This survey measures vaccine coverage, which is the percentage of people who received the annual seasonal influenza vaccine in a specific influenza season.

Vaccine effectiveness is a measure of how well the influenza vaccine is able to prevent influenza illness.  Throughout the season, surveillance networks monitor how well the influenza vaccine is working in the current season. Estimates can vary depending on several factors such as the study methods; the population, setting and outcomes that are being studied; the type and mix of vaccine products; the stage of the season and the kinds of influenza viruses that are circulating when the study is conducted.

Given an atypical late-season wave of influenza A(H3N2), the community-based Canadian Sentinel Practitioner Surveillance Network (SPSN) has undertaken an additional interim analysis to assess effectiveness of the 2018/19 influenza vaccine against A(H3N2) illness. The Canadian SPSN includes participation by sentinel practitioners in the four most populous provinces of Canada: Alberta, British Columbia, Ontario and Quebec.  Vaccine effectiveness (VE) monitoring methods are as described in prior publications, available at the SPSN website alongside historic and current VE findings.

Based on data collected as of March 30th, 2019 including more than 2800 participants, the 2018/19 northern hemisphere vaccine has provided little or no protection against medically-attended outpatient A(H3N2) illness (VE of 23%; 95% CI: -9 to 46), including among working age adults 20-64 years old who comprise the majority of SPSN participants (VE of -16%; 95% CI: -76 to 23). Consistent with expected patterns, VE estimates for this delayed A(H3N2) wave are considerably lower than reported earlier by the SPSN for the primary A(H1N1)pmd09 epidemic based on data collected as of January 12th, 2019. In that mid-season analysis, VE against A(H1N1)pdm09 was 72% (95% CI: 60 to 81) overall, with substantial protection observed in all age groups. In the most recent analysis spanning March 30th, estimates against A(H1N1)pmd09 have remained stable at approximately 70%. The SPSN continues to monitor and will further update VE estimates at end of season.