During week 40, the following influenza activity levels were reported (Figure 1): 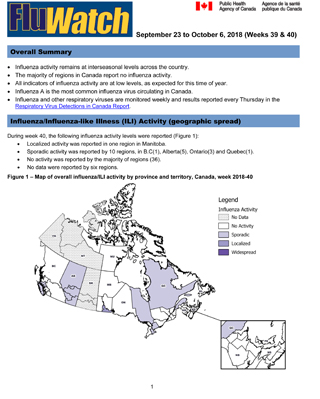 In weeks 39 and 40, the following results were reported from sentinel laboratories across Canada (Figure 2 and Figure 3):

To date this season, detailed information on age and type/subtype has been received for 83 laboratory-confirmed influenza cases (Table 1).

In week 40, 0.9% of visits to healthcare professionals were due to influenza-like illness (ILI) (Figure 4). The percentage of visits for ILI is at interseasonal levels.

Among the 46 participants who reported fever and cough:

In weeks 39 and 40, no new influenza outbreaks were reported. One ILI outbreak was reported in week 39. To date this season, 14 ILI outbreaks have been reported. All outbreaks occurred in LTC facilities.

To date this season, 8 influenza-associated hospitalizations were reported by participating provinces and territoriesFootnote 1.

Since September 1, 2018, the National Microbiology Laboratory (NML) has characterized  4 influenza viruses (2 A(H3N2) and 2 A(H1N1)) that were received from Canadian laboratories.

Two A(H1N1) viruses characterized were antigenically similar to A/Michigan/45/2015, which is the influenza A(H1N1) component of the 2018-19 Northern Hemisphere influenza vaccine.

Three influenza A (2 A(H3N2) and 1 A(H1N1)) viruses were tested for resistance to amantadine and it was found that:

Four influenza viruses (2 A(H3N2) and 2 A(H1N1))  were tested for resistance to oseltamivir and it was found that:

Four influenza viruses (2 A(H3N2) and 2 A(H1N1)) were tested for resistance to zanamivir and it was found that: