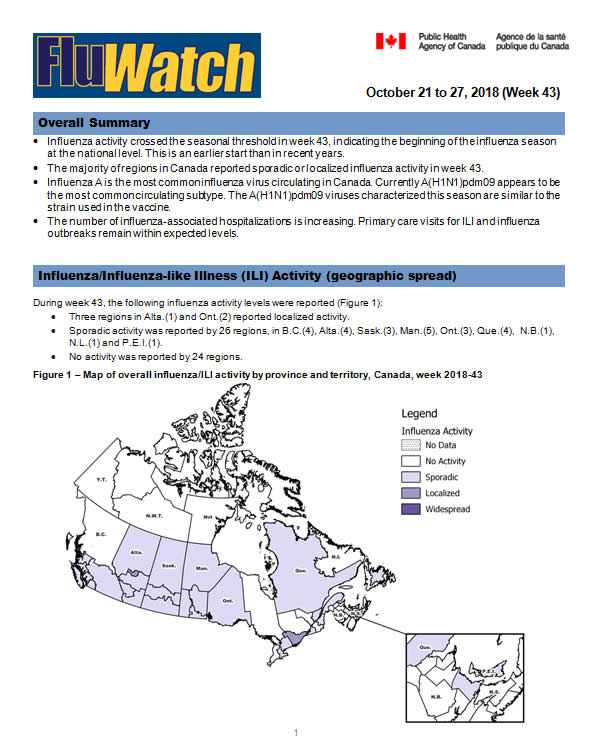 During week 43, the following influenza activity levels were reported (Figure 1):

In week 43, the following results were reported from sentinel laboratories across Canada (Figure 2):

To date this season 513 laboratory-confirmed influenza detections have been reported (Figure 3):

To date this season, detailed information on age and type/subtype has been received for 436 laboratory-confirmed influenza cases (Table 1):

In week 43, 1.4% of visits to healthcare professionals were due to influenza-like illness (ILI) (Figure 4). The percentage of visits for ILI is within expected levels.

Among the 30 participants who reported fever and cough:

No new ILI outbreaks were reported in week 43.

To date this season, 19 ILI outbreaks have been reported; 18 occurred in LTC facilities, and one in a school.

To date this season, 56 influenza-assocaited hospitalizations have been reported by participating provinces and territoriesFootnote 1.

To date this season, 17 pediatric hospitalizations have been reported by the Immunization Monitoring Program Active (IMPACT) network.

To date this season, <5 ICU admissions, and no deaths have been reported.

Since September 1, 2018, the National Microbiology Laboratory (NML) has characterized 18 influenza viruses (2 A(H3N2) and 16 A(H1N1)) that were received from Canadian laboratories.

Seventeen influenza A (3 A(H3N2) and 14 A(H1N1)) viruses were tested for resistance to amantadine and it was found that:

Nineteen influenza viruses (4 A(H3N2) and 15 A(H1N1)) were tested for resistance to oseltamivir and it was found that:

Nineteen influenza viruses (4 A(H3N2) and 15 H1N1) were tested for resistance to zanamivir and it was found that: