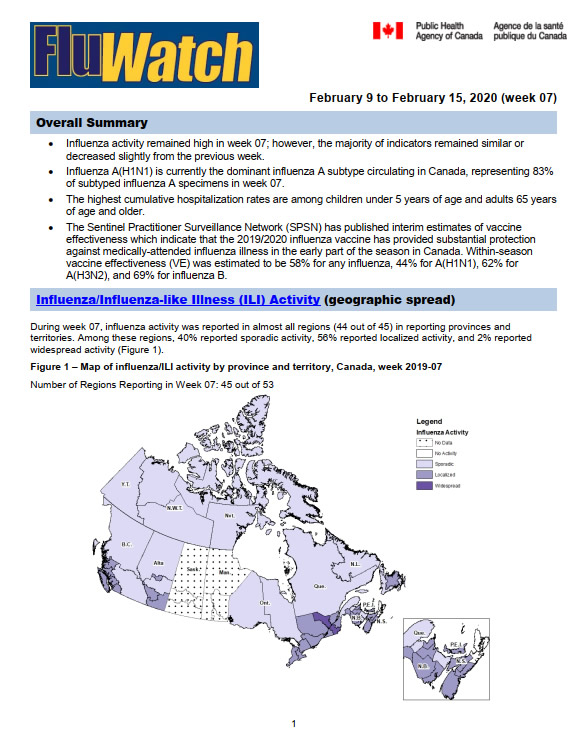 During week 07, influenza activity was reported in almost all regions (44 out of 45) in reporting provinces and territories. Among these regions, 40% reported sporadic activity, 56% reported localized activity, and 2% reported widespread activity (Figure 1).

In week 07, the percentage of laboratory tests positive for influenza was similar to the previous two weeks at 29% and remains similar to the peak percentages reported since late December. Influenza A and B continue to co-circulate.

To date this season (weeks 35 to 07), 38,671 laboratory detections of influenza were reported

Detailed information on age and type/subtype has been received for 30,142 laboratory-confirmed influenza cases (Table 1). To date this season (weeks 35 to 07):

In week 07, 1.4% of visits to healthcare professionals were due to influenza-like illness (ILI) which is below the average for this time of year (Figure 4).

Among the 79 participants who reported cough and fever:

To date this season, 1,687 influenza-associated hospitalizations were reported by participating provinces and territories1.

189 ICU admissions and 64 deaths have been reported.

In week 07, 69 pediatric (≤16 years of age) laboratory-confirmed influenza-associated hospitalizations were reported by the Immunization Monitoring Program Active (IMPACT) network (Figure 8). The number of cases due to influenza B remains high; however, in recent weeks, a growing proportion of cases have been due to influenza A.

The elevated number of cases this season compared to previous seasons is likely due to the concurrent circulation of influenza A and B. The number of influenza A-associated pediatric hospitalizations is above the average for this time of year which is expected when A(H1N1) is the predominant circulating virus. The number of hospitalizations with influenza B remains well above average compared to previous seasons.

To date this season, 581 hospitalizations, 53 intensive care unit admissions, and 25 deaths have been reported (Figure 10).

Sequence analysis of 150 B/Victoria lineage viruses with reduced titre to B/Colorado/06/2017 showed that 100% had a three amino acid deletion (162-164) in the HA gene. Sequencing is pending for the remaining viruses.

Based on data collected between November 1, 2019 and February 1, 2020, vaccine effectiveness (VE) was estimated to be 58% for any influenza, 44% for A(H1N1), 62% for A(H3N2), and 69% for influenza B. Substantial protection was observed among children 1 to 19 years of age against both influenza A and B. A good level of protection was also observed among working age adults (20-64 yrs) across all influenza types (Table 2). VE among adults 65 years and older, although imprecise due to small numbers, was lower at 18% (95% CI -59 to 58). The SPSN interim estimates are published and available online.