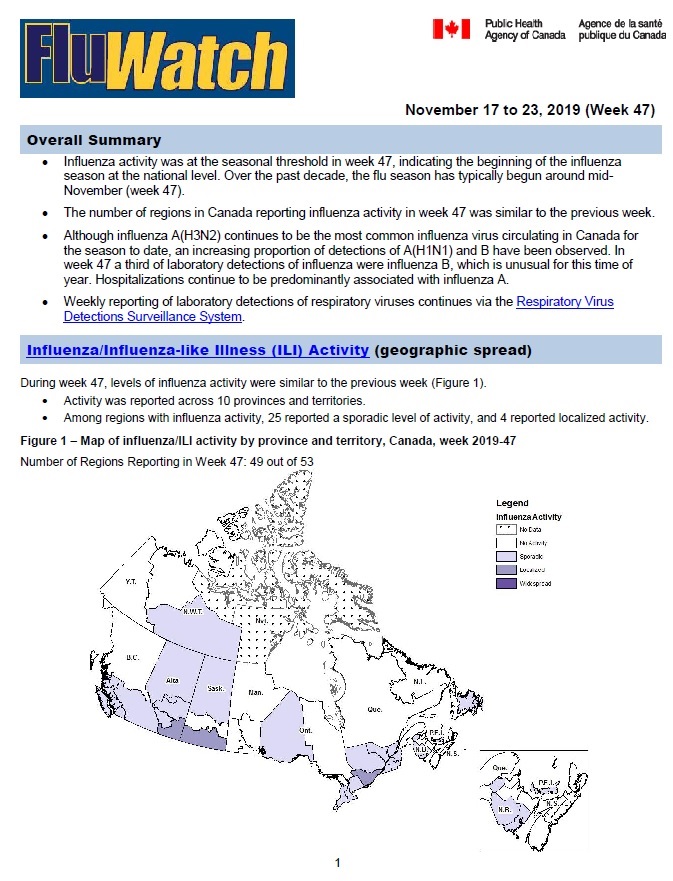 During week 47, levels of influenza activity were similar to the previous week (Figure 1).

In week 47, the number of detections of influenza continued to increase. The following results were reported from sentinel laboratories across Canada (Figures 2 and 3):

To date this season (weeks 35 to 47), 1,258 laboratory detections of influenza were reported:

Detailed information on age and type/subtype has been received for 1,017 laboratory-confirmed influenza cases (Table 1).

In week 47, 1.6%, of visits to healthcare professionals were due to influenza-like illness (ILI) which is the average for this time of year (Figure 4).

Among the 46 participants who reported cough and fever:

In week 47, three new outbreaks were reported: two in long term care facilities and one in a facility type categorized as ‘other’, which includes facilities such as private personal care homes, correctional facilities, and colleges/universities (Figure 6).

To date this season, a total of 23 laboratory-confirmed influenza outbreaks have been reported; thirteen in long-term care facilities, two in acute care facilities and eight in a facility type categorized as ‘other’. Of the outbreaks where influenza type was reported (21), eighteen were due to influenza A. Among the 11 outbreaks for which the influenza A subtype was reported, all were associated with A(H3N2). One ILI outbreak in a school/daycare has also been reported.

To date this season. 106 influenza-associated hospitalizations were reported by participating provinces and territoriesFootnote 1.

Thirteen ICU admissions and no deaths have been reported.

Number of provinces and territories reporting in week 47: 9 out of 9

In week 47, five pediatric (≤16 years of age) laboratory-confirmed influenza-associated hospitalizations were reported by the Immunization Monitoring Program Active (IMPACT) network (Figure 7). This is slightly below the average (13) for week 47 over the previous five seasons.

From September 1 to November 28, 2019, the National Microbiology Laboratory (NML) has characterized 60 influenza viruses (30 A(H3N2), 17 A(H1N1) and 13 influenza B) that were received from Canadian laboratories.

Among the eight influenza A(H3N2) viruses antigenically characterized to date, the majority (88%) showed reduced titer by HI assay to A Kansas/14/2017 using antiserum raised against egg-propagated A Kansas/14/2017 (Figure 8a).

Among the 13 influenza B viruses antigenically characterized this season, all belonged to the B/Victoria lineage, and the majority (62%) showed reduced titer by HI assay to B/Colorado/06/2017 using antiserum raised against cell culture-propagated B/Colorado/06/2017 (Figure 8c).

Sequence analysis showed that all of the eight viruses showing reduced titre had a three amino acid deletion (162-164) in the HA gene.