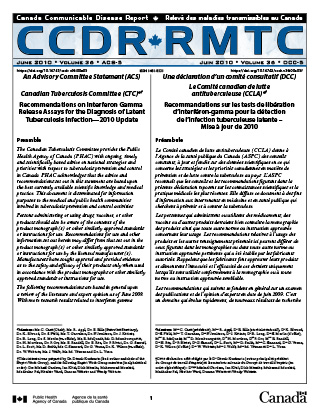 The Canadian Tuberculosis Committee provides the Public Health Agency of Canada (PHAC) with ongoing, timely and scientifically based advice on national strategies and priorities with respect to tuberculosis prevention and control in Canada. PHAC acknowledges that the advice and recommendations set out in this statement are based upon the best currently available scientific knowledge and medical practice. This document is disseminated for information purposes to the medical and public health communities involved in tuberculosis prevention and control activities.

The following recommendations are based in general upon a review of the literature and expert opinion as of June 2009. With more research results related to interferon gamma release assays being published all the time, the field is quickly evolving. As a result, this Advisory Committee Statement will be periodically updated as warranted and made available at www.publichealth.gc.ca/tuberculosis.

Until recently, the diagnosis of tuberculosis infection depended solely on the tuberculin skin test (TST), an imperfect test with known limitations. The most significant advance in recent times has been the development of T-cell-based interferon-gamma release assays (IGRAs). IGRAs are in-vitro blood tests that are based on interferon-gamma (IFN-γ) release after stimulation by TB specific antigens (e.g. ESAT-6 and CFP-10). Two IGRAs are currently registered for use in Canada - the QuantiFERON®-TB Gold In-Tube (QFT) assay (Cellestis Ltd., Carnegie, Australia), and the T-SPOT®.TB assay (Oxford Immunotec, Oxford, U.K.).

Since the publication of the original ACS, a large number of IGRA studies have been published. In October 2008, updated version of the 2007 guidelines was published (Can Commun Dis Rep. 2008 October, 34(ACS-6):1-13.)Footnote 3. In December 2008, an expert group was constituted to prepare this second update.

In addition, all relevant English language literature up to June 30, 2009 was reviewed and considered. A specific focused subgroup literature review on IGRA performance in immunocompromised populations was also performed.

Although no formal grading of the quality of evidence was done, almost all the available studies on IGRAs have limitations, namely lack of a gold standard for latent TB infection (LTBI), cross-sectional design, use of sensitivity and specificity as surrogates for patient-important outcomes, and lack of adequate data on important outcomes such as accuracy of diagnostic algorithms (rather than single tests), incremental or added value of IGRAs, impact of IGRAs on clinical decision-making and therapeutic choices, and the prognostic ability of IGRAs to accurately identify individuals with LTBI who are at the highest risk for progressing to active tuberculosis and therefore most likely to benefit from preventive therapy. Thus, available evidence on IGRAs cannot be considered high quality, and further research is likely to have an important impact on the recommendations made in this ACS and may change the recommendations.

Sensitivity and specificity of IGRAs

Sensitivity figures are in the context of active TB disease since there is no gold standard for LTBI. Specificity refers to active TB and LTBI.

IGRA performance in children (under age 18)

IGRA performance in serial testing and predictive value of IGRAs

The unit costs of the new IGRAs are substantially higher than those of TST (with the T-SPOT.TB having a higher unit cost than the QFT). T-SPOT.TB is also technically more demanding than the QFT and this also has cost implications in terms of technician time and expertise. Unless the lab is able to batch the tests, unit costs become even higher.

Based on the updated reviews and expert opinion, the Expert Work Group made several recommendations. These are summarized in the Table 1, presented alongside the previous ACS recommendations. Table 1 also provides information on what has changed and why.

Interpretation in persons with both TST and IGRA test results

While the updated recommendations for use of IGRA tests are shown in Table 1, there may be situations where IGRA testing has been performed outside of the above recommendations. If both IGRA and TST results are available and the clinician is unsure as to how to interpret the results, the approach in Table 2 is recommended. However, there are limited longitudinal data on prognosis of discordant IGRA and TST results. Therefore, the recommendations in Table 2 are primarily based on expert opinion and accumulated evidence on the prognostic value of the TST.

Interferon-gamma release assays have emerged as promising alternatives to the tuberculin skin test. The first official recommendation from Canadian tuberculosis authorities on IGRAs was published in 2007, based on literature published up to October 2006Footnote 1. An updated version was published in October 2008Footnote 3 based on updated literature reviews and expert opinion (as of March 2008). An updated literature review to June 2009 and expert opinion were used to develop these revised recommendations on IGRAs which are presented in this statement.

Despite the substantial body of literature on IGRAs, several questions still remain unanswered, including the prognostic ability of these tests to accurately identify those individuals with latent tuberculosis infection that are at highest risk for progressing to active tuberculosis disease, and therefore most likely to benefit from preventive therapy Footnote 4, Footnote 5, Footnote 13. Emerging data suggest that IGRAs appear to have dynamic characteristics that increase the likelihood of conversions and reversions over timeFootnote 14. At present, there is no consensus on the interpretation of IGRA conversions and reversions. Data are still limited on high-risk populations such as children and immunocompromised persons. Ongoing studies should resolve these issues within the next few years and inform evidence-based guidelines on how to implement IGRAs in clinical practice.

Statement of Disclosure of Interests

The authors acknowledge the members of the Canadian Tuberculosis Committee: