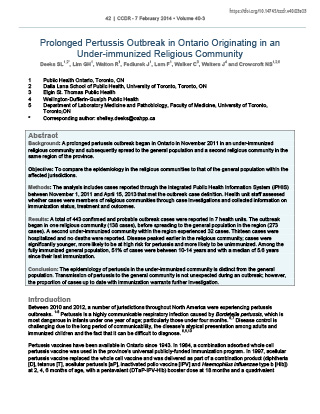 Objective: To compare the epidemiology in the religious communities to that of the general population within the affected jurisdictions.

Results: A total of 443 confirmed and probable outbreak cases were reported in 7 health units. The outbreak began in one religious community (138 cases), before spreading to the general population in the region (273 cases). A second under-immunized community within the region experienced 32 cases. Thirteen cases were hospitalized and no deaths were reported. Disease peaked earlier in the religious community; cases were significantly younger, more likely to be at high risk for pertussis and more likely to be unimmunized. Among the fully immunized general population, 51% of cases were between 10-14 years and with a median of 5.6 years since their last immunization.

Conclusion: The epidemiology of pertussis in the under-immunized community is distinct from the general population. Transmission of pertussis to the general community is not unexpected during an outbreak; however, the proportion of cases up to date with immunization warrants further investigation.

Between 2010 and 2012, a number of jurisdictions throughout North America were experiencing pertussis outbreaks Footnote 1 Footnote 2 Footnote 3 Footnote 4 Footnote 5. Pertussis is a highly communicable respiratory infection caused by Bordetella pertussis, which is most dangerous in infants under one year of age; particularly those under four months. Footnote 6 Footnote 7 Disease control is challenging due to the long period of communicability, the disease's atypical presentation among adults and immunized children and the fact that it can be difficult to diagnose. Footnote 8 Footnote 9 Footnote 10

Pertussis vaccines have been available in Ontario since 1943. In 1984, a combination adsorbed whole cell pertussis vaccine was used in the province's universal publicly-funded immunization program. In 1997, acellular pertussis vaccine replaced the whole cell vaccine and was delivered as part of a combination product (diphtheria [D], tetanus [T], acellular pertussis [aP], inactivated polio vaccine [IPV] and Haemophilus influenzae type b [Hib]) at 2, 4, 6 months of age, with a pentavalent (DTaP-IPV-Hib) booster dose at 18 months and a quadrivalent booster dose (DTaP-IPV) at 4-6 years of age.  In 2003, an adolescent dose was publicly-funded using dTap at 14-16 years of age. Finally, in 2011, a single dose adult pertussis immunization program was introduced. Footnote 11

Our objective is to report on the outbreak investigation, comparing the epidemiology in the religious communities to that of the general population, including demographics, immunization status, treatment and outcomes.

Pertussis is a legally reportable disease in Ontario (population 13.5 million in 2012).12 Cases are identified passively and case information is entered into a provincial reportable diseases registry, the integrated Public Health Information System (iPHIS). Pertussis outbreak case definitions which included a geographic component were established and modified three times throughout the course of the outbreak to reflect the evolving situation. The outbreak period was between November 1, 2011 and April 15, 2013. We extracted data entered into iPHIS meeting the confirmed and probable pertussis outbreak case definitions on August 22, 2013. Extracted data included demographic information, laboratory results, hospitalization status, outcome, and immunization history, although completeness varied by field.  We determined episode date for each case using a standardized hierarchy: symptom onset date was preferentially selected, specimen collection date if symptom onset was unavailable, and case reported date if both were unavailable.

Early in the outbreak, we supplemented iPHIS data with additional case note data using an enhanced case report form to gather information on whether the case was at high risk for pertussis, as well as health seeking behavior and treatment.  A manual case record review was undertaken on cases reported between November 1, 2011 and August 15, 2012. We classified persons as high risk for pertussis if they were pregnant or under 1 year of age, and assessed whether cases obtained laboratory testing, initiated antibiotic therapy and the time interval to seek treatment.

As accurately assessing immunization status from a single field in iPHIS was problematic, we reviewed the following fields for all cases:  immunization agent, immunization administration dates, relevant immunizations up-to-date (RI), and risk factor (RF).  The number of doses of pertussis-containing vaccine received was established based on the number of administration dates reported for each case. We determined the validity of doses by considering minimum age and minimum interval requirements between doses, as per the Ontario publicly funded schedule.Footnote 13 An interval of at least 14 days prior to disease onset was required for a dose to be considered valid.  We assessed cases without any valid doses (i.e., no administration dates) as unimmunized if RI=No or RF=unimmunized; otherwise we assessed these cases as having unknown immunization status.  We assessed cases with at least one valid dose as being complete for age (i.e., up to date) or partially immunized in accordance with the provincial immunization schedule and guidelines established by the National Advisory Committee on Immunization. Footnote 11 Footnote 14

We calculated incidence rates per 100,000 population using demographic data from Statistics Canada obtained through IntelliHealth Ontario. Population data by HU were unavailable at the time of analysis for 2013; 2012 population data were substituted. Descriptive analyses and statistical tests were performed using SPSS version 19 (IBM, Armonk, NY, USA) and SAS version 9.2. We compared median age and time intervals for selected outcomes between communities using the Kruskal-Wallis test; statistical significance was declared at p<0.05. Where appropriate, we excluded missing data from analyses.

A total of 443 pertussis cases were reported by 7 outbreak-affected HUs during the outbreak period. Of these, 344 cases (77.7%) were classified as confirmed based on laboratory confirmation of pertussis or an epidemiologic link to a laboratory-confirmed case and the remaining 99 were classified as probable based on symptomatology. Cases ranged in age from 14 days to 68 years, with a median age of 9.4 years (age was missing for 6 cases). Females accounted for 56.0% of cases. The annualized incidence rate during the outbreak was 25.7 cases per 100,000 population (2012 population of 7 HUs was 1.2 million people). The overall provincial rate during the same time period was 6.1 pertussis cases per 100,000 population. Thirteen cases (2.9%) were hospitalized and there were no deaths. All hospitalized cases were children and 8 were under one year of age.

The temporal distribution of cases showed a bimodal pattern over the course of the outbreak (Figure 2). The first wave peaked in January 2012 and was limited almost exclusively to cases from religious community A. The second wave peaked in June 2012 and was comprised primarily of cases from the general population, although the tail of the epidemic curve was mixed and involved religious community B cases.

Ontario experienced an outbreak of pertussis that lasted more than 17 months. We found that the epidemiology of pertussis in the under-immunized community was distinct from that of the general population, with a younger age distribution, a larger proportion of cases with no immunization and a larger proportion of high risk cases.  The pertussis epidemiology in the under-immunized community is more consistent with that found in the developing world and similar to that seen prior to immunization programs in North America.Footnote 15 Footnote 16 Despite the younger age distribution, the disease did not appear to be more severe in the under-immunized communities. Although 86.6% of the religious community cases were unimmunized, some community members were willing to receive immunizations during specific outreach clinics held by the HUs, where testing and chemoprophylaxis were also offered.

Transmission to the general community is not unexpected during a pertussis outbreak, especially considering the infectiousness of the organism. Ontario does not have a comprehensive immunization registry, so we cannot determine immunization coverage in the general population or vaccine effectiveness. The lack of denominator information for the religious communities also precludes assessment of vaccine effectiveness using the screening method.  However, Ontario has a school-based immunization information system and in 2011/2012 school year, the proportion of 7 and 17 year old Ontario students who were up to date with their pertussis immunizations was 76.0% and 67.7%, respectively.Footnote 17 This coverage is not high enough to prevent transmission of pertussis within communities, especially in regions where coverage is even lower as a result of religious or conscientious objection to immunization.

The proportion of general population cases who were fully immunized in this outbreak was concerning and has also been seen in other recent outbreaks in North America.Footnote 1 Footnote 4 In Ontario, acellular pertussis vaccine was implemented in 1997, and therefore the oldest cohort of children vaccinated solely with acellular vaccine would have been between approximately 14 and 15 years of age during this outbreak. Although children 10-14 years of age account for 5.7% of Ontario's population, they accounted for 20.4% of outbreak cases overall, 28.2% of the general population cases and 51.2% of the general population cases who were up to date with their immunizations. This warrants further investigation and is suggestive of waning immunity associated with acelluar pertussis vaccine, which has also been demonstrated in the United States.Footnote 1 Footnote 18 Footnote 19

Our analysis has a number of limitations. Accurately assessing immunization status within iPHIS is challenging for diseases such as pertussis with a complex immunization schedule. Records were frequently missing clinical information and immunization status was unknown for 14.9% of cases, despite extensive follow-up by health unit staff. These limitations were somewhat offset through the use of enhanced case report forms at the beginning of the outbreak. Given the prolonged nature of the outbreak and the human resources required to complete the report forms, they were only completed on cases occurring during the first nine and a half months of the outbreak, which may impact their representativeness. Finally, as noted above, we were not able to calculate vaccine effectiveness as we do not have a comprehensive provincial immunization registry.

This outbreak provided the opportunity to contrast pertussis epidemiology in distinct communities within one geographic area. Transmission from under-immunized communities to the general community is not unexpected, however the number of adolescent cases who were up to date with immunization suggests waning vaccine immunity.

The authors would like to thank all persons involved in the outbreak and outbreak response from the affected Health Units, the Ontario Ministry of Health and Long Term Care and Public Health Ontario.

All authors have no conflicts of interest to disclose.

No external funding was secured for this study.

All authors have no financial relationships relevant to this article to disclose.