Pertussis surveillance and immunization in Canada: 2012 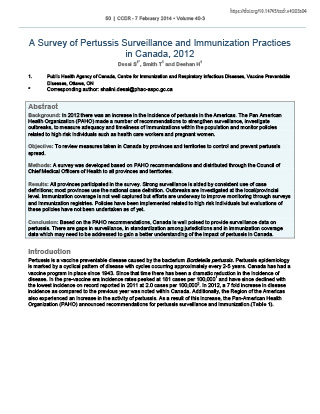 A Survey of Pertussis Surveillance and Immunization Practices in Canada, 2012

Background: In 2012 there was an increase in the incidence of pertussis in the Americas. The Pan American Health Organization (PAHO) made a number of recommendations to strengthen surveillance, investigate outbreaks, to measure adequacy and timeliness of immunizations within the population and monitor policies related to high risk individuals such as health care workers and pregnant women.

Objective: To review measures taken in Canada by provinces and territories to control and prevent pertussis spread.

Methods: A survey was developed based on PAHO recommendations and distributed through the Council of Chief Medical Officers of Health to all provinces and territories.

Results: All provinces participated in the survey. Strong surveillance is aided by consistent use of case definitions; most provinces use the national case definition. Outbreaks are investigated at the local/provincial level. Immunization coverage is not well captured but efforts are underway to improve monitoring through surveys and immunization registries. Policies have been implemented related to high risk individuals but evaluations of these policies have not been undertaken as of yet.

Conclusion: Based on the PAHO recommendations, Canada is well poised to provide surveillance data on pertussis. There are gaps in surveillance, in standardization among jurisdictions and in immunization coverage data which may need to be addressed to gain a better understanding of the impact of pertussis in Canada.

Pertussis is a vaccine preventable disease caused by the bacterium Bordetella pertussis. Pertussis epidemiology is marked by a cyclical pattern of disease with cycles occurring approximately every 2-5 years. Canada has had a vaccine program in place since 1943. Since that time there has been a dramatic reduction in the incidence of disease. In the pre-vaccine era incidence rates peaked at 181 cases per 100,000 Footnote 1 and have since declined with the lowest incidence on record reported in 2011 at 2.0 cases per 100,000 Footnote 2. In 2012, a 7 fold increase in disease incidence as compared to the previous year was noted within Canada. Additionally, the Region of the Americas also experienced an increase in the activity of pertussis. As a result of this increase, the Pan-American Health Organization (PAHO) announced recommendations for pertussis surveillance and immunization.

The purpose of this article is to review activities undertaken by jurisdictions in Canada related to the increase in pertussis activity and to assess Canadian strengths and challenges as they relate to the PAHO recommendations.

Using Fluid Surveys, an electronic survey was created and administered by the Public Health Agency of Canada, in collaboration with public health officials in Ontario. The survey was assessed by 3 reviewers for face validity and content validity. The survey consisted of 35 questions related to the priorities for pertussis surveillance outlined by PAHO. Part one (16 questions) focused on disease surveillance, case definitions and reporting practices. Part two (19 questions) focused on immunization practices, immunization coverage and evaluation of programs. Each Province and Territory, through their Chief Medical Officer of Health, was asked to complete the survey. The survey is available upon request from the corresponding author.

Completed surveys were collated and analyzed based on common themes. A descriptive analysis of the responses was done.

There was a 100% response rate to the survey with a 92% completion rate. One territory was not able to complete the entire survey.

Reporting occurs within each jurisdiction at varying time cycles. One province receives reports near real time with probable as well as confirmed cases being reported every hour, while other jurisdictions have daily, weekly, monthly reporting schedules. Data collected within each jurisdiction is also variable. All the Provinces and Territories collect information on the age, gender, place of residence as well as laboratory testing method and result of test. Many jurisdictions have the capacity to obtain further information by case investigation at the local level; two jurisdictions are also able to obtain information on immunization history from data sources separate from surveillance data, such as immunization registries or public health immunization databases. Interestingly, not all the Provinces and Territories routinely collect information on immunization history, when doing so would contribute to understanding if there were a possible vaccine failure or failure to vaccinate. Additional information that isn't consistently collected by the Provinces and Territories includes, symptoms, complications, duration of hospital stay and outcomes.

In the setting of an outbreak, pertussis monitoring is enhanced in most jurisdictions to include a change in case definition, the types of variables collected and how data is collected. Changes in case definition are dependent on the characteristics of the outbreak. In some the Provinces and Territories, enhanced data is collected during outbreaks to include data on transmission setting, contacts, risk factors, preventative treatment and more detailed laboratory data.

In light of outbreaks, many the Provinces and Territories have recently, modified their surveillance of pertussis to improve their understanding of disease burden and/or assess the impact of their immunization programs. These changes included additional laboratory testing, adding in variables to look at transmission especially among infants and their family members, increased emphasis on immunization history to determine effectiveness of immunization programs, the use of additional software to understand the changes in incidence, and improved communication with frontline providers. Some provinces have also increased the frequency with which they analyse their routine surveillance data to improve their ability to respond to increased disease activity.

Given the pivotal role that frontline providers have in immunization coverage, all the Provinces and Territories use a variety of methods to communicate and disseminate information that would assist providers, including routine publication of reports on coverage and directly posting estimates of immunization coverage to the P/T public health web page.

Adult pertussis immunization programs are publically funded in seven jurisdictions, but most require proof of no previous vaccination in adulthood to be eligible for the dose. Immunization of health care workers is recommended for most jurisdictions.

PAHO presented each member state with a list of five recommendations in the face of an increased activity of pertussis. Reviewing this list and the activities that have been undertaken within different jurisdictions within Canada, our system for surveillance and response provides many of the attributes PAHO recommends, but additional steps can be taken to improve our ability to describe disease activity and outbreaks, to improve our understanding of immunization coverage and to protect vulnerable groups.

PAHO has recommended strengthening surveillance in order to monitor disease burden, to detect outbreaks and to assess impact of immunization programs. In Canada, pertussis is nationally notifiable but our ability to evaluate the impact of immunization and identify outbreaks is limited by the current national reporting schedule (once yearly) and format (aggregate only) in which the data is received. At the P/T level, pertussis is monitored routinely with many more details. The system within the Provinces and Territories has allowed the detection of outbreaks. Routine monitoring varies from jurisdiction to jurisdiction not only in terms of timelines but also in terms of data collected. If additional information is required at a national level, it is possible to request data from the Provinces and Territories. Methods to strengthen our current system include more detailed and timely reporting to the national level and an improved ability to capture immunization history for individual cases as well as the population at large.

The ability to thoroughly investigate an outbreak does not exist within the national surveillance program. Thorough investigation does occur at the P/T and local level throughout Canada. Assistance with outbreak investigation can be sought from national programs such as the Canadian Field Epidemiology Program. As an outbreak is occurring there are multiple methods through which jurisdictions can communicate, for example postings of public health alerts via the Canadian Network for Public Health Intelligence, community of expert groups in the Public Health Network such at the Canadian Immunization Committee as well as more senior level tables such as Council of Chief Medical Officers of Health. The ability to disseminate findings from outbreaks is limited by resources. A number of jurisdictions have written up and widely disseminated their outbreak experiences but not all jurisdictions have this capacity. This poses challenges to learning from our collective experiences.

Although Canada has a national immunization survey that occurs every two years, it typically does not have the sample size to determine jurisdictional variation, or investigate specific groups who may be under or unimmunized. Many jurisdictions are moving towards immunization registries and have (or will have) the ability to analyze immunization coverage and to generate reminders for those who are not up to date. The challenges of immunization coverage include ensuring all the Provinces and Territories in Canada have this capability and ensuring that estimates are comparable in terms of the methods used to derive immunization estimates.

Based on the PAHO recommendations and the obligation that Canada bears as a member of the international community, there are important practice implications from this survey. For a frontline provider, ongoing vigilance, appropriate testing and reporting of individuals with illnesses compatible with pertussis remains of utmost importance. These case notifications are the basis of accurate surveillance and enable identification of outbreaks that require the type of detailed investigations that can improve our understanding of the disease. Since each level of government plays a role in surveillance, immunization coverage and protecting vulnerable groups, this survey also highlights opportunities for improvement from a broader public health perspective. For example, understanding the type of data collected at the provincial/territorial level and how this varies across the country will inform national deliberations on the future of pertussis surveillance. In addition, further discussion and evaluation of changes in surveillance and public health measures various jurisdictions have made can provide evidence based determination of best practices in the control of pertussis in Canada.

Canada routinely monitors pertussis and is able to provide a national perspective on disease incidence and more detailed epidemiologic picture via P/T surveillance data when necessary. Canada maintains national immunization targets in-line with the PAHO recommendations, routinely assesses general immunization coverage via population-based surveys, and has national recommendations for the immunization of health care workers and pregnant women in outbreak situations. Current gaps in Canadian surveillance and immunization practices include the availability of detailed information on pertussis activity at the national level. In addition, the absence of readily available immunization data on cases and the population in general limits our understanding of the impact of immunization on disease burden and prevents a meaningful evaluation of immunization programs in Canada. These issues have previously been identified and are currently being discussed in the context of data sharing agreements with P/T partners, and the renewal of the National Immunization Strategy.

The authors would like to gratefully acknowledge members of the Chief Medical Officers of Health and their the Provinces and Territorial teams in completing this survey, as well as the Province of Ontario for their assistance with development of the survey tool.

No conflicts to declare.