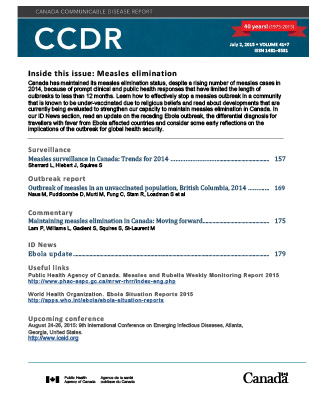 Inside this issue: Measles elimination

Canada has maintained its measles elimination status, despite a rising number of measles cases in 2014, because of prompt clinical and public health responses that have limited the length of outbreaks to less than 12 months. Learn how to effectively stop a measles outbreak in a community that is known to be under-vaccinated due to religious beliefs and read about developments that are currently being evaluated to strengthen our capacity to maintain measles elimination in Canada. In our ID News section, read an update on the receding Ebola outbreak, the differential diagnosis for travellers with fever from Ebola affected countries and consider some early reflections on the implications of the outbreak for global health security.