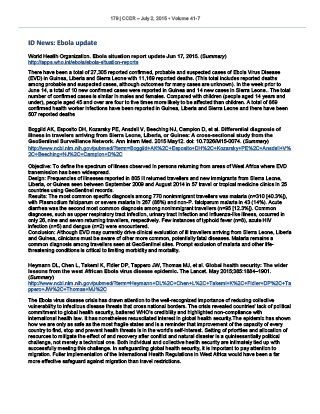 There have been a total of 27,305 reported confirmed, probable and suspected cases of Ebola Virus Disease (EVD) in Guinea, Liberia and Sierra Leone with 11,169 reported deaths. (This total includes reported deaths among probable and suspected cases, although outcomes for many cases are unknown). In the week prior to June 14, a total of 10 new confirmed cases were reported in Guinea and 14 new cases in Sierra Leone. The total number of confirmed cases is similar in males and females. Compared with children (people aged 14 years and under), people aged 45 and over are four to five times more likely to be affected than children. A total of 869 confirmed health worker infections have been reported in Guinea, Liberia and Sierra Leone and there have been 507 reported deaths.

Objective: To define the spectrum of illness observed in persons returning from areas of West Africa where EVD transmission has been widespread.

Conclusion: Although EVD may currently drive clinical evaluation of ill travellers arriving from Sierra Leone, Liberia and Guinea, clinicians must be aware of other more common, potentially fatal diseases. Malaria remains a common diagnosis among travellers seen at GeoSentinel sites. Prompt exclusion of malaria and other life-threatening conditions is critical to limiting morbidity and mortality.

The Ebola virus disease crisis has drawn attention to the well-recognized importance of reducing collective vulnerability to infectious disease threats that cross national borders. The crisis revealed countries' lack of political commitment to global health security, battered WHO's credibility and highlighted non-compliance with international health law. It has nonetheless resuscitated interest in global health security. The epidemic has shown how we are only as safe as the most fragile states and is a reminder that improvement of the capacity of every country to find, stop and prevent health threats is in the world's self-interest. Setting of priorities and allocation of resources to mitigate the effect of and recovery after conflict and natural disaster is a quintessentially political challenge, not merely a technical one. Both individual and collective health security are intimately tied up with successfully meeting this challenge. In safeguarding global health security, it is important to pay attention to migration. Fuller implementation of the International Health Regulations in West Africa would have been a far more effective safeguard against migration than travel restrictions.