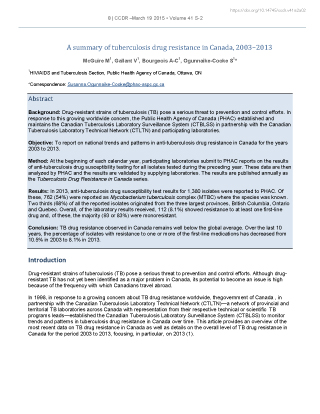 A summary of tuberculosis drug resistance in Canada, 2003−2013

Objective: To report on national trends and patterns in anti-tuberculosis drug resistance in Canada for the years 2003 to 2013.

Method: At the beginning of each calendar year, participating laboratories submit to PHAC reports on the results of anti-tuberculosis drug susceptibility testing for all isolates tested during the preceding year. These data are then analyzed by PHAC and the results are validated by supplying laboratories. The results are published annually as the Tuberculosis Drug Resistance in Canada series.

Results: In 2013, anti-tuberculosis drug susceptibility test results for 1,380 isolates were reported to PHAC. Of these, 762 (54%) were reported as Mycobacterium tuberculosis complex (MTBC) where the species was known. Two thirds (68%) of all the reported isolates originated from the three largest provinces, British Columbia, Ontario and Quebec. Overall, of the laboratory results received, 112 (8.1%) showed resistance to at least one first-line drug and, of these, the majority (93 or 83%) were monoresistant.

Conclusion: TB drug resistance observed in Canada remains well below the global average. Over the last 10 years, the percentage of isolates with resistance to one or more of the first-line medications has decreased from 10.5% in 2003 to 8.1% in 2013.

Drug-resistant strains of tuberculosis (TB) pose a serious threat to prevention and control efforts. Although drug-resistant TB has not yet been identified as a major problem in Canada, its potential to become an issue is high because of the frequency with which Canadians travel abroad.

The CTBLSS is an isolate-based surveillance system designed to collect timely data on TB drug resistance across Canada. Information on the results of all unique isolates tested for drug resistance during the previous calendar year are voluntarily submitted by provincial TB laboratories to PHAC for inclusion in the CTBLSS. The primary objectives of the CTBLSS are:

TB drug resistance is determined through susceptibility testing of cultures grown from clinical specimens obtained from individuals with culture-positive TBFootnote 2. People with active TB disease are said to have drug-resistant TB if the strain of Mycobacterium tuberculosis complex (MTBC) causing their disease is resistant to one or more of the four first-line anti-TB drugs, isoniazid, rifampin, ethambutol or pyrazinamide. Data are submitted for confirmed cases of MTBC, including Mycobacterium tuberculosis, M. africanum, M. canetti, M. caprae, M. microti, M. pinnipedii or M. bovis, but excluding M. bovis Bacille Calmette-Guérin (BCG). See text box below for definitions of the different drug-resistant patterns.

At the beginning of each calendar year, participating laboratories voluntarily submit drug susceptibility testing (DST) results for all MTBC isolates tested in the previous year. Although some laboratories report results for M. bovis BCG strain, these are excluded from this article.

With respect to DST results, participating laboratories are asked to submit test results for all first-line anti-TB drugs (isoniazid [INH], rifampin [RMP], ethambutol [EMB] and pyrazinamide [PZA]). If isolates show resistance to isoniazid and rifampin, second-line drug testing should be done to rule out XDR-TBFootnote 2. Laboratories are requested to report on the DST results for a fluoroquinolone (ofloxacin, moxifloxacin or levofloxacin) and the injectable agents (amikacin, kanamycin and capreomycin).

The analysis presented here is based on descriptive statistics only. No statistical procedures were used for comparative analyses, nor were any statistical techniques applied to account for missing data. Data in tables with small cell sizes (n≤5) were not suppressed, since disclosure is not deemed to pose any risk of identifying individual cases. These procedures are in line with PHAC’s Directive for the collection, use and dissemination of information relating to public healthFootnote 3.

In 2013, TB DST results for 1,397 isolates were reported to PHAC. Of these, 762 (54%) were reported as MTBC where the species was known (750 were M. tuberculosis; 8 were M. africanum and 4 were M. bovis) and 618 (44%) were MTBC of an unknown species. Seventeen (1.2%) isolates were identified as M. bovis BCG and were excluded from further analyses (data not shown). As a result, laboratory results for 1,380 isolates were analyzed for this article. Of these, 68% of all the reported isolates originated from the three largest provinces, British Columbia, Ontario and Quebec. Figure 1 provides a breakdown of the number of isolates tested by province or territory of origin of the isolate.

In 2013, of the 112 TB isolates reported to be resistant to at least one of the four first-line drugs, the majority, 93 (83%), were monoresistant . Of these, 74 (80%) were isoniazid-resistant, 17 (18%) were pyrazinamide-resistant, and 2 (2%) were rifampin-resistant. No isolates were identified as ethambutol-monoresistant. Figure 2 provides a breakdown of the percentage of all the isolates tested that showed any resistance to one of the four first-line TB drugs.

In 2013, 68% of all the reported isolates originated from the three largest provinces, British Columbia, Ontario and Quebec. All isolates from Northwest Territories, Nunavut, Yukon, and Newfoundland and Labrador were fully susceptible to all the first-line drugs tested. Prince Edward Island did not report a case of TB in 2013 and no laboratory results were reported by that province. Of the 15 isolates resistant to both isoniazid and rifampin in 2013, 13 originated from Ontario and 2 from Quebec.

In 2013, sex information was reported for all but two individuals from whom isolates were obtained, and age or date of birth was available for all. Males accounted for 55% of all reports. Figure 4 shows the number of isolates tested by age group and sex.

TB drug resistance in Canada remains well below the global average. Over the last 11 years, the percentage of isolates resistance to one or more of the first-line medications has decreased from 10.5% in 2003 to 8.1% in 2013.

Organisms resistant to both isoniazid and rifampin, a resistance pattern defined as multidrug-resistant TB (MDR-TB); pose a considerable challenge to treatment and prevention efforts because effective anti-tuberculosis drugs are limited. Data published by the World Health Organization (WHO) show that globally, in 2012, about 3.6% (95% CI: 2.1%–5.1%) of new TB cases and 20.2% (95% CI: 13.3%–27.2%) of previously treated TB cases were MDR-TBFootnote 4. In Canada, overall MDR-TB rate is 1.1%.

These data need to be considered in light of some limitations. Given the minimal identifying information available for each isolate (age and sex), it is possible that multiple records from one individual could be included in the database. However, this bias is believed to be minimal.

Typically, only isolates with MDR-TB or other extensive resistance patterns will undergo drug sensitivity testing to select second-line drugs. Although the Clinical and Laboratory Standards Institute recommends that isoniazid-monoresistant isolates, as well as other poly-resistant, non-MDR isolates, be tested for second-line drug resistance, this is not universally done in Canada. Other isolates which are not MDR-TB may be resistant to a fluoroquinolone because of the widespread use of these antibiotics for other respiratory infections. To some extent, this limits our understanding of the emergence of second-line resistance within Canada. The demographic and clinical data collected through the CTBLSS are minimal. As such, no differentiation can be made between primary and secondary/acquired drug resistance, nor can differentiation be made between resistance patterns for new cases versus re-treatment cases. However, the Tuberculosis in Canada report also presents case-based data on primary and acquired drug resistance in Canada and, combined with the Tuberculosis: Drug Resistance in Canada Report, provides a comprehensive overview of TB-case and drug-resistance surveillance data from a national perspective.

Public Health Agency of Canada. Directive for the collection, use and dissemination of information relating to public health. Unpublished document. Ottawa, ON: Minister of Health; 2013.