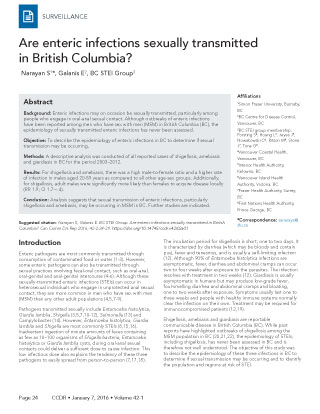 Objective: To describe the epidemiology of enteric infections in BC in order to determine if sexual transmission may be occurring.

Methods: A descriptive analysis was conducted of all reported cases of shigellosis, amebiasis and giardiasis in BC for the period 2003-2012.

Results: For shigellosis and amebiasis, there was a high male-to-female ratio and a higher rate of infection in males aged 20-59 years as compared to all other age-sex groups. Additionally, for shigellosis, adult males were significantly more likely than females to acquire disease locally (RR 1.9; CI 1.7-2.4).

Conclusion: Analysis suggests that sexual transmission of enteric infections, particularly shigellosis and amebiasis, may be occurring in MSM in BC. Further studies are indicated.

The incubation period for shigellosis is short; one to two days. It is characterized by diarrhea (which may be bloody and contain pus), fever and tenesmus, and is usually a self-limiting infection Footnote 12. Although 90% of Entamoeba histolytica infections are asymptomatic, fever, diarrhea and abdominal cramps can occur two to four weeks after exposure to the parasites. The infection resolves with treatment in two weeks Footnote 12. Giardiasis is usually asymptomatic in humans but may produce low-grade fever, foul smelling diarrhea and abdominal cramps and bloating, one to two weeks after exposure. Symptoms usually last one to three weeks and people with healthy immune systems normally clear the infection on their own. Treatment may be required for immunocompromised patients Footnote 12Footnote 19.

Shigellosis, amebiasis and giardiasis are reportable communicable disease in British Columbia (BC). While past reports have highlighted outbreaks of shigellosis among the MSM population in BC Footnote 20Footnote 21Footnote 22 the epidemiology of STEIs, including shigellosis, has never been assessed in BC and is therefore not well understood. The objective of this study was to describe the epidemiology of these three infections in BC to determine if sexual transmission may be occurring and to identify the population and regions at risk of STEI.

A retrospective descriptive analysis was conducted of shigellosis, amebiasis and giardiasis cases reported in BC for the period 2003-2012. All cases were laboratory-confirmed and identified from the Integrated Public Health Information System (iPHIS). Exposure information including sexual activity and travel history was reviewed for all cases. Travel information was obtained from the Primary Access Regional Information Systems (PARIS) for Vancouver Coastal Health Authority cases and from iPHIS for the remaining health authorities. Travel information was classified as either "international travel" (if travel outside of Canada was reported within four days of symptom onset) or "local" (if the case reported no travel, or travel within Canada, within BC, or within the health authority of residence) Footnote 23. Exposure information was available only for shigellosis and amebiasis as giardiasis cases are not routinely followed-up by public health authorities in BC. Information on outbreaks was obtained from the Canadian Network for Public Health Intelligence outbreak summary module, BC Centre for Disease Control outbreak investigation reports and discussion with experts.

Statistical analyses included case counts and incidence rates (IR) by year, geography, sex and age groups. Population estimates for IR calculation were obtained from BC Stats. Cases were grouped into one of four age groups. The 20-59 year age group represented the sexually active population because it was appeared to have an excess number of adult male cases in the preliminary analysis.

Data were analyzed using Microsoft Excel® 2007 and OpenEpi software (version 2.3.1). Chi-square tests were used to compare proportions of shigellosis cases associated with international travel to that of local cases. A p-value of <0.05 was considered to be significant. Relative risk with 95% confidence intervals was calculated to compare the risk of shigellosis in these two groups.

For shigellosis and amebiasis, a high male-to-female ratio was noted, with a higher rate of infection in males aged 20-59 years as compared to all other age-sex groups. Additionally, for shigellosis, adult males were significantly more likely than females to acquire shigellosis locally and an excess of shigellosis cases in adult males was observed in Vancouver health services delivery area (data not shown). Furthermore, two of the four shigellosis outbreaks reported in BC affected the MSM population. In both outbreaks, no other common risk factors such as food, restaurants or travel were noted and sexual practices (oral-anal sex) were thought to be the mode of transmission. This is in contrast to Giardiasis which affected males more than females across all age groups with the highest rate reported in males aged 0-9 years which is less indicative of sexual transmission.

This study also found that adult males were more likely than adult females to acquire shigellosis locally (RR = 1.9). A similar finding was reported in a shigellosis outbreak in Wales, where locally acquired shigellosis occurred predominantly in males who had reported MSM activity in the week before illness Footnote 33. A higher risk of travel in female cases is indicative of acquiring shigellosis via risk factors considered to be more common during travel including contaminated food and water.

The highest annual average incidence for amebiasis was reported in adult males (16.7 per 100,000 population). The reasons for this are unclear. There was very little sexual exposure information on amebiasis. Entamoeba histolytica is usually transmitted from person-to-person Footnote 10 or via contaminated water Footnote 12. Since most British Columbians have access to safe drinking water Footnote 37 apart from travel to endemic countries, sexual transmission seems likely for this age-sex group. Sexual transmission of E. histolytica has been reported in the MSM population, with oral-anal sexual practices considered to be the mode of transmission Footnote 16Footnote 38Footnote 39.

The rate of giardiasis was higher for males in all age groups, with males aged 0-9 years having the highest rate. This finding is similar to observations reported by other developed countries Footnote 40Footnote 41Footnote 42Footnote 43 where Giardia most commonly infected small children in day-care centres and transmission was associated with poor hand hygiene. Given a similar pattern of giardiasis in BC, sexual transmission of Giardia seems less likely, or may be occurring at low rates, or is being overwhelmed by other transmission routes such as contact with contaminated water, travel to endemic countries and transmission in day-cares centres Footnote 40.

While this study has demonstrated a higher incidence of some enteric infections in males aged 20-59 years, not all adult male excess disease can be attributed to sexual transmission and not all sexual transmission will be observable by an excess in adult males. The combination of adult age and male sex used to identify an at-risk population is not a specific indicator of sexual transmission. Other factors (such as contaminated water, occupational and outdoor recreational exposure) may also account for the higher incidence observed in this group. Additionally, heterosexual adults are also at risk of STEI through oral-anal contact. Missing exposure information due to the lack of case interviews, incomplete assessment of sexual risk factors or incomplete data entry further hampered the ability to attribute cases to a specific transmission route.

Despite growing literature on the risk of STEIs, prevention guidelines and educational information for at-risk populations are not widely available. Public health guidelines on this topic do not appear to be available in Canada. Such guidelines could address the public health investigation required to better assess the risk of STEIs and modes of transmission, the need for contact tracing and educational messaging recommended for cases, at-risk populations and the general population. The findings of this study led to a review of the provincial enteric case follow-up forms to better capture information about sexual practices that increase the risk of STEIs.

A timely diagnosis and treatment of enteric infections will not only decrease the duration of illness but also interrupt its transmission Footnote 4Footnote 29. Currently, the Canadian Guidelines on Sexually Transmitted Infections recommend that health care providers test for enteric pathogens if clients report anorectal sexual activities and/or present with compatible symptoms Footnote 4. Additionally, health care providers should provide safe-sex counseling based on a personalized sexual health risk assessment Footnote 29. Currently, intense efforts to educate the at-risk population have been reported only during STEI outbreaks Footnote 27Footnote 44. However, to increase awareness about STEIs among at-risk populations, sexual health promotion messaging needs to occur on a more routine basis and should include information about STEIs, advice on avoiding unprotected oral-anal contact (especially if the partner is sick), hand hygiene following sexual contact and to seek medical advice for gastroenteritis Footnote 15Footnote 31.

This study suggests that sexual transmission of enteric infections, in particular shigellosis and amebiasis, may be occurring among MSM in Vancouver, BC. This conclusion is supported by outbreak data and limited case exposure (sexual activity, travel) history. To reduce the incidence of STEIs, public health interventions should expand beyond safe food and hand hygiene practices. Continued surveillance especially of case exposure history may also help to guide public health interventions to reduce STEI.

The authors thank the regional health authorities and the environmental health officers involved in the surveillance data collection and case follow-ups and the BC laboratories involved in diagnosis of cases included in the manuscript. We also wish to thank Marsha Taylor, Michael Otterstatter, Sophie Li and especially Dr. Pablo Nepomnaschy for their guidance and valuable feedback during this project.

Office of the Provincial Health Officer. Progress on the Action Plan for Safe Drinking Water in BC, 2011. Victoria BC: Ministry of Health; 2012. http://www.health.gov.bc.ca/pho/pdf/drinking-water-report-2011.pdf