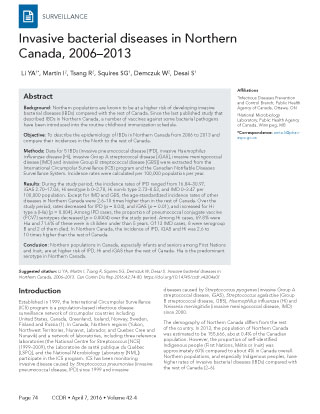 Background: Northern populations are known to be at a higher risk of developing invasive bacterial diseases (IBDs) compared with the rest of Canada. Since the last published study that described IBDs in Northern Canada, a number of vaccines against some bacterial pathogens have been introduced into the routine childhood immunization schedule.

Objective: To describe the epidemiology of IBDs in Northern Canada from 2006 to 2013 and compare their incidences in the North to the rest of Canada.

Conclusion: Northern populations in Canada, especially infants and seniors among First Nations and Inuit, are at higher risk of IPD, Hi and iGAS than the rest of Canada. Hia is the predominant serotype in Northern Canada.

The demography of Northern Canada differs from the rest of the country. In 2013, the population of Northern Canada was estimated to be 155,666, about 0.4% of the Canadian population. However, the proportion of self-identified Indigenous people (First Nations, Métis or Inuit) was approximately 60% compared to about 4% in Canada overall. Northern populations, and especially Indigenous people, have higher rates of invasive bacterial diseases (IBDs) compared with the rest of Canada Footnote 2Footnote 3Footnote 4Footnote 5Footnote 6.

The objective of this report is to describe the epidemiology of IBDs in Northern Canada from 2006 to 2013 and compare their incidences in the North to the rest of Canada.

Data used in this report came from public health surveillance and were exempt from research ethics board approval.

The demographic data, serotype distributions, as well as clinical characteristics, and immunization status of the IBD cases were examined. Incidence rates for GBS of the newborn were not calculated since annual live births estimates of Northern regions were not available for this report. All incidence rates were per 100,000 population per year. Direct method was used for calculating age-standardized rates. Confidence intervals (CIs) of age-standardized rates were calculated with the method based on the gamma distribution Footnote 20. Cases with missing age were excluded from age standardization. The Chi-squared test and Fisher’s exact test were used to compare proportions. Poisson regression was used to compare incidence rates and estimate disease trends. Statistical significance was considered at the 95% confidence level. Descriptive and inferential analyses were conducted using Microsoft Excel 2010 and SAS EG 5.1.

From 2006 to 2013, the total number of confirmed cases reported in Northern Canada was 270 IPD, 110 iGAS, 109 Hi, 13 IMD and 8 GBS of the newborn. The demographic information for cases of each disease is noted in Table 1. A total of 46 IBD related deaths were reported.

Overall, there were no significant changes in the age-standardized annual incidence rates of Haemophilus influenzae type b (Hib) (p = 0.18) or Hi non-b (p = 0.15) from 2006 to 2013. Except for 6 cases with missing ethnicity and 1 non-Indigenous case, all the other 102 cases were First Nations and Inuit people. Of the 12 Hib cases, 10 were under 18 months of age; 4 had completed their primary vaccine series, 5 had received the vaccine but were not up-to-date and 1 was not vaccinated.

Invasive Group B streptococcal disease (GBS) of the newborn

Of 8 cases of GBS of the newborn, 6 were early onset and 2 were late onset. The serotyping information was available for only 3 cases, 1 serotype Ia and 2 serotype III. Septicemia/bacteremia was the most common manifestation (n=6), followed by meningitis (n=2) and pneumonia (n=2) (Table 3). No deaths were reported.

In Northern Canada, the incidence of IPD, iGAS and Hi was 2.6 to 10 times higher than in the rest of Canada, especially among First Nations and Inuit people. These findings are consistent with previous Canadian and international circumpolar studies Footnote 3Footnote 4Footnote 5Footnote 6Footnote 21Footnote 22Footnote 23.

IPD accounted for half of the IBDs cases during the study period and continues to be a substantial cause of morbidity in Northern Canada, especially for infants and people aged 60 years and greater. The risk of death did not vary between Indigenous and non-Indigenous peoples.

Routine PCV7 vaccination of infants started in 2002 in some Northern regions and IPD incidence has reduced since then Footnote 5Footnote 6. This report demonstrates a further reduction and sustained decreasing trend in PCV7 serotype-caused IPD as well as the total incidence of IPD. The incidence of IPD caused by PCV13 has not changed. More longitudinal data are needed for further assessment of PCV13. The efficacy and effectiveness of PPV23, which differs from conjugated vaccines, are relatively lower Footnote 24Footnote 25Footnote 26 and the protection of PPV23 appears to wane after 5 years Footnote 27. It is not surprising to see cases in individuals who had been immunized.

Routine Hib vaccine programs have been implemented in Canada since 1997 Footnote 8 and Hib is now rare in the country. However, it is still a concern in Northern Canada with a substantially higher rate among Indigenous infants. Some studies suggested that poor health, environmental and housing conditions of Indigenous children may be potential risk factors Footnote 28Footnote 29Footnote 30Footnote 31. Hia has been a predominant serotype in Northern Canada since the beginning of ICS Footnote 5Footnote 22Footnote 32 whereas non‑typeable Hi and type f are more common in other circumpolar regions Footnote 32. This report also demonstrates the significant increasing trend of Hia. National data of Hi non-b types are aggregated into a single category, so the serotype specific trends and distributions of Northern Canada and the rest of the country cannot be compared.

IMD is generally rare in Northern Canada as well as the rest of the country Footnote 33. Since the implementation of childhood immunization programs for MenC, the incidence of meningococcal C is at an all‑time low and meningococcal B is the predominant serotype in Canada Footnote 33. None of the cases reported during the study period could have been prevented by the vaccine programs at the time.

The incidence of iGAS increased between 1999 and 2005 Footnote 5Footnote 32 but decreased between 2006 and 2013. This change in trend should be interpreted with caution due to the small number of cases. The most common emm types were emm1, emm59 and emm91, similar to the distribution reported between 1999 and 2005 Footnote 5 and the rest of Canada Footnote 34 but different than that of other circumpolar regions such as Alaska where emm3, emm41 and emm12 were more common Footnote 5Footnote 32.

Due to the lack of live birth population data and extremely small number of cases of GBS of the newborn, it is difficult to compare the disease epidemiology between Northern Canada and the rest of Canada or other countries.

It is important to consider the limitations when interpreting the data in this report. The disease characteristics, e.g., serotyping, outcomes and immunization history, could be underestimated or overestimated due to missing data. The analyses of GBS and IMD were limited due to the extremely small case numbers and the lack of live birth population data. Due to the instability of results based on the small number of cases and small population sizes, caution should be used when interpreting results. Finally, further detailed analysis of Inuit, First Nations and Métis individuals was not possible due to small numbers and the lack of availability of population estimates of these individual groups in the ICS region.

Compared to the rest of Canada, data indicate that Northern Canada has higher incidence rates of IPD, Hi and iGAS, especially among infants and seniors. First Nations and Inuit groups are more vulnerable to the diseases than non-Indigenous people. Enhanced national surveillance of IBDs is needed to better understand the disease disparities between Northern Canada and the rest of the country. In Canada, ICS is the only surveillance system that captures both epidemiological and laboratory data on IBDs for Northern populations. Ongoing surveillance will contribute to the understanding of disease epidemiology, which will ultimately assist in the formulation of prevention and control strategies, including immunization recommendations, for Northern populations.

We would like to thank all members of the Canadian International Circumpolar Surveillance Invasive Bacterial Diseases Working Group, particularly A. Mullen, B. Lefebvre, C. Cash, C. Foster, G. Tyrrell, H. Hannah, J. Proulx, K. Dehghani, Y. Jafari, for their invaluable contribution to the ICS surveillance and to this report. We would also like to thank J. Cunliff and M. St‑Jean for database management and N. Abboud for project management.

Funding for Canada’s participation in International Circumpolar Surveillance was paid for by the Public Health Agency of Canada.

Melegaro A, Edmunds WJ. The 23-valent pneumococcal polysaccharide vaccine. Part I. Efficacy of PPV in the elderly: a comparison of meta-analyses. Eur J Epidemiol. 2004;19(4):353-63.