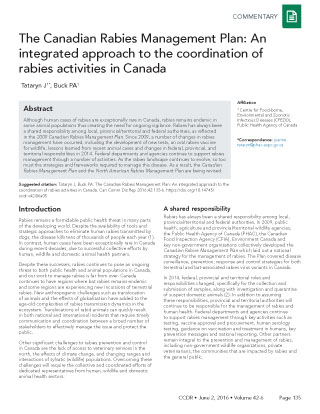 The Canadian Rabies Management Plan: An integrated approach to the coordination of rabies activities in Canada

Although human cases of rabies are exceptionally rare in Canada, rabies remains endemic in some animal populations thus creating the need for ongoing vigilance. Rabies has always been a shared responsibility among local, provincial/territorial and federal authorities, as reflected in the 2009 Canadian Rabies Management Plan. Since 2009, a number of changes in rabies management have occurred, including the development of new tests, an oral rabies vaccine for wildlife, lessons learned from recent animal cases and changes in federal, provincial and territorial responsibilities in 2014. Federal departments and agencies continue to support rabies management through a number of activities. As the rabies landscape continues to evolve, so too must the strategies and frameworks required to manage this disease. As a result, the Canadian Rabies Management Plan and the North American Rabies Management Plan are being revised.

Rabies remains a formidable public health threat in many parts of the developing world. Despite the availability of tools and strategic approaches to eliminate human rabies transmitted by dogs, the disease kills tens of thousands of people each year Footnote 1. In contrast, human cases have been exceptionally rare in Canada during recent decades, due to successful collective efforts by human, wildlife and domestic animal health partners.

Despite these successes, rabies continues to pose an ongoing threat to both public health and animal populations in Canada, and our work to manage rabies is far from over. Canada continues to have regions where bat rabies remains endemic and some regions are experiencing new incursions of terrestrial rabies. New anthropogenic challenges such as translocation of animals and the effects of globalization have added to the age-old complexities of rabies transmission dynamics in the ecosystem. Translocations of rabid animals can quickly result in both national and international incidents that require timely communication and coordination between a broad number of stakeholders to effectively manage the issue and protect the public.

Other significant challenges to rabies prevention and control in Canada are the lack of access to veterinary services in the north, the effects of climate change, and changing ranges and interactions of sylvatic (wildlife) populations. Overcoming these challenges will require the collective and coordinated efforts of dedicated representatives from human, wildlife and domestic animal health sectors.

Rabies has always been a shared responsibility among local, provincial/territorial and federal authorities. In 2009, public health, agriculture and provincial/territorial wildlife agencies, the Public Health Agency of Canada (PHAC), the Canadian Food Inspection Agency (CFIA), Environment Canada and key non-government organizations collectively developed the Canadian Rabies Management Plan which laid out a national strategy for the management of rabies. The Plan covered disease surveillance, prevention, response and control strategies for both terrestrial and bat-associated rabies virus variants in Canada.

In 2014, federal, provincial and territorial roles and responsibilities changed, specifically for the collection and submission of samples, along with investigation and quarantine of suspect domestic animals Footnote 2. In addition to assuming these responsibilities, provincial and territorial authorities will continue to be responsible for the management of rabies and human health. Federal departments and agencies continue to support rabies management through key activities such as testing, vaccine approval and procurement, human serology testing, guidance on vaccination and treatment in humans, key prevention messages and national reporting. Other partners remain integral to the prevention and management of rabies, including non-government wildlife organizations, private veterinarians, the communities that are impacted by rabies and the general public.

New rabies-control tests and technologies have been developed, such as an oral rabies vaccine which is effective in skunks and raccoons, and lessons have been learned from recent outbreaks. As a result, the Canadian Rabies Management Plan is being updated by a working group composed of federal, provincial and territorial public health, agriculture, and wildlife authorities and stakeholders from non-government organizations. Collectively, members represent a broad range of disciplines including policymaking/regulation, epidemiology, ecology, infectious disease surveillance/control and laboratory diagnostics. Led jointly by representatives from PHAC and the Ontario Ministry of Health and Long-Term Care, the goal of this process will be to ensure the Plan reflects advances and changes in Canada and includes new insights and details on multijurisdictional coordination during national incidents. The target date for completion of the updated plan is fall 2016.

The updated Plan will reflect current practices and Canadian Rabies Management Plan will also provide important Canadian context for the revision of the North American Rabies Management Plan (NARMP) Footnote 3, which is also underway. The 2008 NARMP established a protocol for rabies management in North America and has played a key role in facilitating mutual cross-border planning, communication, and response in recent years. It has also supported rabies prevention and control within each respective country and North America overall.

The effective management of rabies in Canada and across North America involves an integrated and collaborative approach between partners in human and animal health. As the rabies landscape continues to evolve, so too must the strategies and frameworks that manage this disease. The Canadian Rabies Management Plan, and associated collaborative efforts, are positioned to support these evolving challenges in the coming years.

The authors would like to acknowledge the many partners and stakeholders involved in rabies surveillance, prevention, education, research, response and control across Canada.