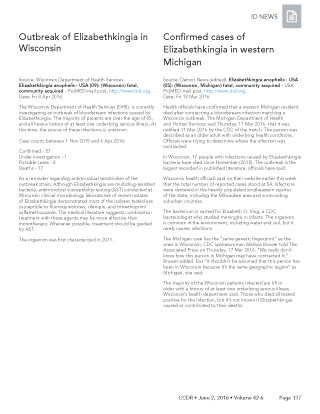 Outbreak of Elizabethkingia in Wisconsin

The Wisconsin Department of Health Services (DHS), is currently investigating an outbreak of bloodstream infections caused by Elizabethkingia. The majority of patients are over the age of 65, and all have a history of at least one underlying serious illness. At this time, the source of these infections is unknown. Case counts between 1 Nov 2015 and 6 Apr 2016

As a reminder regarding antimicrobial sensitivities of the outbreak strain: Although Elizabethkingia are multidrug-resistant bacteria, antimicrobial susceptibility testing (AST) conducted at Wisconsin clinical microbiology laboratories of recent isolates of _Elizabethkingia_ demonstrated most of the isolates tested are susceptible to fluoroquinolones, rifampin, and trimethoprim/sulfamethoxazole. The medical literature suggests combination treatment with these agents may be more effective than monotherapy. Whenever possible, treatment should be guided by AST.

The organism was first characterized in 2011.

Health officials have confirmed that a western Michigan resident died after contracting a bloodstream infection matching a Wisconsin outbreak. The Michigan Department of Health and Human Services said Thursday, 17 Mar 2016, that it was notified 11 Mar 2016 by the CDC of the match. The person was described as an older adult with underlying health conditions. Officials were trying to determine where the infection was contracted.

In Wisconsin, 17 people with infections caused by Elizabethkingia bacteria have died since November [2015]. The outbreak is the largest recorded in published literature, officials have said.

Wisconsin health officials said on their website earlier this week that the total number of reported cases stood at 54. Infections were centered in the heavily populated southeastern quarter of the state, including the Milwaukee area and surrounding suburban counties.

The bacterium is named for Elizabeth O. King, a CDC bacteriologist who studied meningitis in infants. The organism is common in the environment, including water and soil, but it rarely causes infections.

The Michigan case has the "same genetic fingerprint" as the ones in Wisconsin, CDC spokeswoman Melissa Brower told The Associated Press on Thursday, 17 Mar 2016. "We really don't know how this person in Michigan may have contracted it," Brower added. But "it shouldn't be assumed that this person has been in Wisconsin because it's the same geographic region" as Michigan, she said.

The majority of the Wisconsin patients infected are 65 or older with a history of at least one underlying serious illness, Wisconsin's health department said. Those who died all tested positive for the infection, but it's not known if Elizabethkingia caused or contributed to their deaths.

On September 18, 2014, the Missouri Department of Health and Senior Services (MDHSS) was notified of a suspected rabies case in a Missouri resident. The patient, a man aged 52 years, lived in a rural, deeply wooded area, and bat sightings in and around his home were anecdotally reported. Exposure to bats poses a risk for rabies. After two emergency department visits for severe neck pain, paresthesia in the left arm, upper body tremors, and anxiety, he was hospitalized on September 13 for encephalitis of unknown etiology. On September 24, he received a diagnosis of rabies and on September 26, he died. Genetic sequencing tests confirmed infection with a rabies virus variant associated with tricolored bats. Health care providers need to maintain a high index of clinical suspicion for rabies in patients who have unexplained, rapidly progressive encephalitis, and adhere to recommended infection control practices when examining and treating patients with suspected infectious diseases… This case is the second case of human rabies in Missouri in 6 years; during this time, specimens from six humans were referred from the Missouri State Public Health Laboratory to CDC for antemortem rabies testing. In 2008, a male aged 55 years died of rabies in Missouri after being bitten on the ear by a bat; before this, the last Missouri rabies case was reported in 1959. During 2008–2011, a total of 11 human rabies cases were reported in the United States and Puerto Rico, including five cases with infections acquired overseas. Among the six domestically acquired cases, five were associated with bat variant rabies viruses; in three cases, a confirmed bat bite was reported. In Missouri, bats and skunks are principal reservoirs of rabies. Given that wild animals might not display obvious signs of rabies illness, it is important that, whenever possible, all bats and wild terrestrial carnivores implicated in a potential rabies exposure be euthanized and tested for rabies.