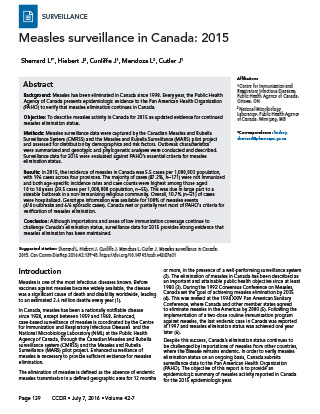 Background: Measles has been eliminated in Canada since 1998. Every year, the Public Health Agency of Canada presents epidemiologic evidence to the Pan American Health Organization (PAHO) to verify that measles elimination continues in Canada.

Objective: To describe measles activity in Canada for 2015 as updated evidence for continued measles elimination status.

Results: In 2015, the incidence of measles in Canada was 5.5 cases per 1,000,000 population, with 196 cases across four provinces. The majority of cases (87.2%, n=171) were not immunized and both age-specific incidence rates and case counts were highest among those aged 10 to 14 years (29.5 cases per 1,000,000 population, n=55). This was due in large part to a sizeable outbreak in a non-immunizing religious community. Overall, 10.7% (n=21) of cases were hospitalized. Genotype information was available for 100% of measles events (4/4 outbreaks and 6/6 sporadic cases). Canada met or partially met most of PAHO’s criteria for verification of measles elimination.

Measles is one of the most infectious diseases known. Before vaccines against measles became widely available, the disease was a significant cause of death and disability worldwide, leading to an estimated 2.6 million deaths every year Footnote 1.

In Canada, measles has been a nationally notifiable disease since 1924, except between 1959 and 1968. Enhanced, case-based surveillance of measles is coordinated by the Centre for Immunization and Respiratory Infectious Diseases and the National Microbiology Laboratory (NML) at the Public Health Agency of Canada, through the Canadian Measles and Rubella surveillance system (CMRSS) and the Measles and Rubella Surveillance (MARS) pilot project. Enhanced surveillance of measles is necessary to provide sufficient evidence for measles elimination.

The elimination of measles is defined as the absence of endemic measles transmission in a defined geographic area for 12 months or more, in the presence of a well-performing surveillance system Footnote 2. The elimination of measles in Canada has been described as an important and attainable public health objective since at least 1980 Footnote 3. During the 1992 Consensus Conference on Measles, Canada set the goal of achieving measles elimination by 2005 Footnote 4. This was revised at the 1994 XXIV Pan American Sanitary Conference, where Canada and other member states agreed to eliminate measles in the Americas by 2000 Footnote 5. Following the implementation of a two-dose routine immunization program against measles, the last endemic case in Canada was reported in 1997 and measles elimination status was achieved one year later Footnote 6.

Despite this success, Canada’s elimination status continues to be challenged by importations of measles from other countries, where the disease remains endemic. In order to verify measles elimination status on an ongoing basis, Canada submits surveillance data to the Pan American Health Organization (PAHO). The objective of this report is to provide an epidemiologic summary of measles activity reported in Canada for the 2015 epidemiologic year.

Surveillance data: On a weekly basis, measles cases meeting the national case definition Footnote 7 were reported by provinces and territories to PHAC via CMRSS or MARS (n=10 and 3, provinces and territories respectively), including zero-reporting. Non-nominal, non-identifying case data were extracted and submitted to PAHO. Confirmed measles cases with rash onset during the 2015 epidemiologic year (January 4, 2015 to January 2, 2016) were included in this report.

Genotyping: All measles virus genotyping was performed at PHAC’s NML. The World Health Organization (WHO) standardized genotyping: sequencing of 450 nucleotides of the nucleoprotein (N) gene (the N-450), with the addition of the full length haemagglutinin (H) gene Footnote 8 was attempted on all reverse transcription-polymerase chain reaction (RT-PCR) confirmed measles cases. The clinical specimens (respiratory and/or urine) were referred to the NML by provincial laboratories and were RT-PCR-confirmed in the provincial laboratories or at the NML. Measles N-450 and H gene sequences were aligned with WHO genotype reference sequences Footnote 9 and maximum parsimony phylogenetic trees were generated using MEGA6 software Footnote 10. Genotypes were assigned by maximum homology of the N-450 sequences to the WHO genotype reference sequences Footnote 9. Sequences were also deposited in the WHO measles nucleotide surveillance database (MeaNS) and compared to so called “named strains” as well as sequences deposited by other members of the global measles laboratory network Footnote 9,Footnote 11.

This routine public health surveillance activity was exempt from research ethics board approval.

None of the reported cases were born before 1957, the cut off used in some other countries such as the United States Footnote 15. One case in 2015 was indicated as having received three doses of measles-containing vaccine. However, the third dose was administered within one week of rash onset and presumably occurred after exposure to measles. Immunization status could not be assessed for 4.1% (n=8) of cases due to missing information.

Nearly all of the genotype B3 viruses identified were identical to the MVi/Harare.ZWE/38.09 (GenBank JF973033) named strain (n=20) (Figure 3). All of these B3-Harare viruses were detected in measles cases associated with the Quebec outbreak (Appendix), which was linked to a large B3-Harare outbreak in the USA Footnote 17. Three additional cases had genotype B3 viruses identified. While all three were sporadic, travel-related cases (South Africa, Ethiopia and Tunisia), the two cases with travel history to the African region had identical N-450 sequences (matching the MVs/Kansas.USA/1.12, GenBank JX315576 named strain) (Figure 3). However these measles viruses were distinguishable by H gene sequencing (data not shown).

All genotype D4 viruses identified (n=17) had identical N-450 sequences (Figure 3), which were not identical to any named strain. All were associated with an outbreak in Ontario of unknown origin and for which epidemiological links could not be established between many of the cases (Appendix). Extended sequencing, including the H gene and the MF-NCR (the non-coding region between the matrix and fusion genes) was performed to better characterize this outbreak. A detailed description is forthcoming.

The remaining measles cases that were genotyped were all identified to be genotype D8 (n=5), four of which did not match any named strains (Figure 3). Two had identical N-450 sequences and were both from the same outbreak associated with travel to India (Appendix). The remaining three cases with genotype D8 viruses were sporadic cases and all had unique N-450 sequences. Two cases had a history of travel, to either India, where genotype D8 is endemic Footnote 11 or neighbouring Pakistan, while the third case was of unknown source. Globally, measles genotype D8 was the second most frequently reported genotype in 2015, based on submissions to the WHO measles nucleotide surveillance database (MeaNS) Footnote 18.

Canadian measles in the global context

Importations accounted for 4.6% (n=9) of cases in 2015. All imported cases were either adults (aged between 16 and 42 years) who were incompletely immunized for age (n=7), or children too young to be immunized according to the routine schedule (n=2). However, as giving measles-containing vaccine can be considered as early as six months of age when travelling outside of North America Footnote 16, these two children also represent missed opportunities for immunization.

A total of four outbreaks were reported in 2015, involving 190 cases. The source of exposure for the index case was identified for three of four outbreaks, involving travel to the United States, China and India. The largest outbreak resulted from a single importation from the United States, totalling 159 cases (Appendix). Although the number of cases reported for each outbreak ranged from two to 159 (median: 15), outbreak duration was generally short, with a median of three generations (range: 2 to 6). Genotypes B3, D4, H1 and D8 (n=1, each) were identified. A source of exposure was not identified for 14 cases in 2015, all of which were reported by Ontario. Ten of these cases were described in detail elsewhere Footnote 19. Only one of these cases resulted in secondary spread (Appendix).

There are four criteria and indicators set out by PAHO, for the ongoing verification of measles elimination (Table 4). Canada met or partially met three of four indicators.

There were 196 confirmed cases of measles reported in Canada in 2015 originating from all WHO regions except the European Region. The majority of these cases arose from a single importation associated with a popular tourist destination in the United States Footnote 17. This is the third highest total since elimination was achieved in 1998, following 2011 (n=725) and 2014 (n=418). Similar to 2014, most cases (81.1%, n=159) were in a non-immunizing religious community. Burden was highest among children, especially those aged five to 19 years, but also those aged five years or less. Most hospitalized cases were unimmunized. At least one case from every measles event (i.e., four outbreaks and six sporadic cases) was genotyped, with four genotypes were reported in 2015—B3, D4, H1 and D8. Every measles event was separate, as they all had a viral strain distinct from the others. After each event concluded, none of those viral strains were observed again in 2015. The presence of cases with unknown source suggests that not all cases of measles have been reported, however these were relatively few. All outbreaks were well contained given the median outbreak duration was three generations.

For three of four criteria, Canada continues to meet or partially meet PAHO essential indicators for maintenance of measles elimination. One criterion previously met was not met in 2015: coverage with measles-containing vaccine. This likely reflects a change in methodology for estimating coverage, as opposed to a decrease in actual coverage. Notably, the 2016 federal budget announced $25 million over five years in new investments that will support improving immunization coverage in Canada Footnote 26.

Globally, measles elimination and eradication continues to be a public health priority, with all WHO regions striving to achieve elimination goals. Three targets for measles eradication were also endorsed at the World Health Assembly in 2010, aimed at increasing immunization coverage with measles-containing vaccine and reducing in morbidity and mortality worldwide by 2015 Footnote 27. Nevertheless there is still room for improvement, as both the global targets and the elimination goals were not achieved by 2015 Footnote 28.

There are a number of limitations to these data that merit consideration. The indicators of a well-performing surveillance system established by PAHO are based on investigation of measles-like illness (i.e., suspected cases), whereas only confirmed cases are nationally notifiable in Canada. As such, these data can only indirectly address the PAHO criteria. In addition, information on mortality and detailed information on morbidity (e.g., length of hospitalization, sequelae) are not currently captured by CMRSS or MARS, limiting the ability to completely describe the burden of illness due to measles in Canada. Finally, as immunization status is a derived variable that is affected by differences in schedule across jurisdictions, it may be discriminating between individuals on a factor that does not completely describe their risk of being infected with measles.

Both in Canada and abroad, maintaining high immunization coverage with measles-containing vaccine remains a significant public health effort, as well as an essential component of a strategy for achieving and maintaining measles elimination. Although importations and areas of low immunization coverage continue to challenge Canada’s elimination status, surveillance data provided strong evidence that measles elimination has been maintained.

The authors gratefully acknowledge the continued cooperation and efforts of provincial and territorial surveillance and laboratory partners for providing and validating data captured by CMRSS and MARS, for referring specimens for molecular surveillance (genotyping) and for their review of the report content.

The authors are also grateful to Dr. Alberto Severini, Jennifer Beirnes and Lisa Podhorodecki and NML staff in the Genomics Core Services for their contribution in generating the molecular data.

World Health Organization (WHo). Standardization of the nomenclature for describing the genetic characteristics of wild-type measles viruses. Wkly Epidemiol Rec 1998;73:265.