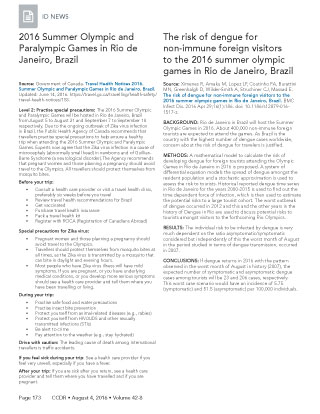 Level 2: Practise special precautions: The 2016 Summer Olympic and Paralympic Games will be hosted in Rio de Janeiro, Brazil from August 5 to August 21 and September 7 to September 18 respectively. Due to the ongoing outbreak of Zika virus infection in Brazil, the Public Health Agency of Canada recommends that travellers practise special precautions to help ensure a healthy trip when attending the 2016 Summer Olympic and Paralympic Games. Experts now agree that the Zika virus infection is a cause of microcephaly (abnormally small head) in newborns and of Guillian-Barre Syndrome (a neurological disorder).The Agency recommends that pregnant women and those planning a pregnancy should avoid travel to the Olympics. All travellers should protect themselves from mosquito bites.

The risk of dengue for non-immune foreign visitors to the 2016 summer olympic games in Rio de Janeiro, Brazil

Background: Rio de Janeiro in Brazil will host the Summer Olympic Games in 2016. About 400,000 non-immune foreign tourists are expected to attend the games. As Brazil is the country with the highest number of dengue cases worldwide, concern about the risk of dengue for travelers is justified.

Methods: A mathematical model to calculate the risk of developing dengue for foreign tourists attending the Olympic Games in Rio de Janeiro in 2016 is proposed. A system of differential equation models the spread of dengue amongst the resident population and a stochastic approximation is used to assess the risk to tourists. Historical reported dengue time series in Rio de Janeiro for the years 2000-2015 is used to find out the time dependent force of infection, which is then used to estimate the potential risks to a large tourist cohort. The worst outbreak of dengue occurred in 2012 and this and the other years in the history of Dengue in Rio are used to discuss potential risks to tourists amongst visitors to the forthcoming Rio Olympics.

Results: The individual risk to be infected by dengue is very much dependent on the ratio asymptomatic/symptomatic considered but independently of this the worst month of August in the period studied in terms of dengue transmission, occurred in 2007.

Conclusions: If dengue returns in 2016 with the pattern observed in the worst month of August in history (2007), the expected number of symptomatic and asymptomatic dengue cases among tourists will be 23 and 206 cases, respectively. This worst case scenario would have an incidence of 5.75 (symptomatic) and 51.5 (asymptomatic) per 100,000 individuals.

Rapid Risk Assessment: The risk of Zika virus to Canadians

Note: This summary reflects the July 2016 update. Rapid Risk Assessments are updated on a regular basis and will be posted at the website above.