Foodborne and waterborne illness in Canada 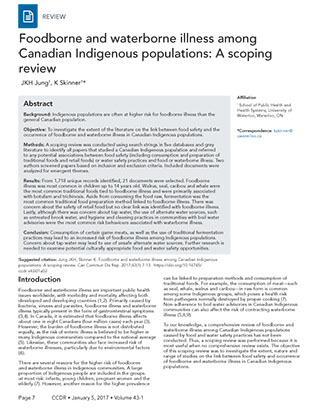 Background: Indigenous populations are often at higher risk for foodborne illness than the general Canadian population.

Objective: To investigate the extent of the literature on the link between food safety and the occurrence of foodborne and waterborne illness in Canadian Indigenous populations.

Methods: A scoping review was conducted using search strings in five databases and grey literature to identify all papers that studied a Canadian Indigenous population and referred to any potential associations between food safety (including consumption and preparation of traditional foods and retail foods) or water safety practices and food or waterborne illness. Two authors screened papers based on inclusion and exclusion criteria. Included documents were analyzed for emergent themes.

Conclusion: Consumption of certain game meats, as well as the use of traditional fermentation practices may lead to an increased risk of foodborne illness among Indigenous populations. Concern about tap water may lead to use of unsafe alternate water sources. Further research is needed to examine potential culturally appropriate food and water safety opportunities.

There are several reasons for the higher risk of foodborne and waterborne illness in Indigenous communities. A large proportion of Indigenous people are included in the groups at most risk: infants, young children, pregnant women and the elderly Footnote 7. However, another reason for the higher prevalence can be linked to preparation methods and consumption of traditional foods. For example, the consumption of meat—such as seal, whale, walrus and caribou—in raw form is common among some Indigenous groups, which poses a health risk from pathogens normally destroyed by proper cooking Footnote 7. Non-adherence to boil water advisories in Canadian Indigenous communities can also affect the risk of contracting waterborne illness Footnote 5Footnote 8Footnote 9.

To our knowledge, a comprehensive review of foodborne and waterborne illness among Canadian Indigenous populations caused by food and water safety practices has not been conducted. Thus, a scoping review was performed because it is most useful when no comprehensive review exists. The objective of this scoping review was to investigate the extent, nature and range of studies on the link between food safety and occurrence of foodborne and waterborne illness in Canadian Indigenous populations.

This scoping review followed the five-step framework developed by Arksey and O’Malley Footnote 10. First we established the research question: “What is currently known about the connection between food safety and occurrence of foodborne/waterborne illness in the Canadian Indigenous population?” Food safety was defined as the handling, preparation and storage of food to preserve the quality of the food and prevent contamination Footnote 11 and also included the preparation and consumption of traditional foods. Traditional foods are those obtained from local plant or animal sources through gathering or harvesting, possess cultural meaning Footnote 12 and are generally synonymous with the terms “wild food” and “country food”. We included the risk for waterborne illness if it was related to individual/community behavioural practices and not solely due to environmental contamination. We considered all forms of disease caused by contaminated food or water sources, and not merely those related to acute gastrointestinal illness (for example, we included hepatitis A in our search). We chose the term “Indigenous” to refer collectively to First Nations, Métis and Inuit people. However groups were also reported in the way they were described in the studies.

A research librarian guided the development of relevant search strings for five academic databases (Appendix). Due to the broad definition of food safety, this term was not included in the search strategy, but was used as part of the inclusion and exclusion criteria when screening (Text box). Journals (not indexed in the databases) and publications by a selection of authors who study food consumption among Indigenous populations were also hand searched (Appendix). All returned citations were exported into RefWorks©.

A custom Google search engine that captured the websites of Canada’s federal and provincial health departments and public health agencies was used to access grey literature Footnote 13Footnote 14. A dissertation and thesis database was also used as well as three federal government websites (Appendix). For the grey literature search, several searches were conducted using different combinations of key terms instead of one systematic search string (12; Appendix).

Titles and abstracts of all returned citations were screened based on a priori inclusion/exclusion criteria. Two independent reviewers scanned the full-text documents using the criteria for final inclusion. Conflicts were discussed between reviewers and the criteria was revisited until an agreement could be reached. Cohen’s Kappa (k) was used to assess inter-rater agreement between the reviewers, where k=0.7 was considered sufficient. There was no limit on the year of publication. For duplicate documents from the same study (multiple publications based on the same data) or report (revised version of previous year’s report), the document with the most relevant information was chosen.

Information collected from each document included: author(s), publication year, location of study in Canada, specific Indigenous population, type of document, study objective, number of cases, type of illness addressed, specific pathogen addressed and reported main health outcomes. Results were summarized through qualitative thematic analysis and emerging themes. Demographic variables such as age, sex and community-level factors were explored for potential connections to foodborne and waterborne illness. Specific types of traditional foods consumed by those who became ill, as well as preparation methods linked to illness were reported. The role of retail food (or purchased food) in Indigenous communities that may lead to increased risk for illnesses was examined, and any water safety practices in connection to waterborne illness were recorded. As with most scoping reviews, a formal quality assessment of the studies was not conducted Footnote 9.

From the 1,718 unique records identified through databases, hand-searches and grey literature, 21 documents (20 journal articles and one report) were included for the qualitative analysis (Figure 1). Reasons for exclusions are noted in Figure 1. There was reasonably strong agreement between reviewers at the full-article screening level (k=0.75).

There were 16 studies on foodborne illness (Table 1). Of these, 15 (94%) were in Inuit populations, and the next most common was First Nations of British Columbia. The most common place of study was in the Northwest Territories (50%); Nunavut, British Columbia, Quebec, Ontario, and Manitoba were other places studied.

In a review of food safety and Aboriginal traditional foods, some studies showed Indigenous people were concerned about the safety of retail food but few assessed the correlation between retail food and foodborne illness in Indigenous populations Footnote 7. One study suggested that retail food could have been a factor for acute gastrointestinal illness in an Inuit community Footnote 8 and another found the odds of developing acute gastrointestinal illness were increased if the person responsible for food preparation was employed Footnote 5. The authors suggested that those with higher income may have less time to access country food and instead consumed more retail food, but this was not confirmed. Conversely, a study in the Northwest Territories Footnote 17 found the higher the food prices in native communities, the lower the risk was for campylobacteriosis. The authors proposed that the higher food prices may lead to lower consumption of retail meat, dairy and fruits and vegetables and choosing processed items, which could reduce exposure to pathogens more commonly observed in perishable foods.

Table 1 identifies that about onequarter of all studies addressed unsafe water practices in Indigenous communities associated with either water or foodborne illness Footnote 5Footnote 7Footnote 8Footnote 30Footnote 32. Three documents Footnote 5Footnote 7Footnote 8 mentioned the preference of Indigenous communities to drink alternative water sources such as bottled water and untreated brook water rather than tap water. One article Footnote 8 mentioned how Inuit members in Rigolet, Labrador, perceived tap water to be a potential risk factor for acute gastrointestinal illness, while viewing untreated brook water to be safe. However, in a similar study Footnote 5 which included the same members of Rigolet, the consumption of these tap water alternatives was associated with developing acute gastrointestinal illness. There was also concern regarding non-compliance to boil water advisories, a potential contributing factor to developing waterborne illness in two studies Footnote 8Footnote 31. Lastly, one article Footnote 30 noted how community water supply problems (which led to higher incidence of hepatitis A in this study) may also lead to infrequent hand-washing or inadequate cleaning as the water quality may be viewed as unreliable. In turn, these behaviors can serve as a further disease vector.

This article provides the most up-to-date review of studies on food safety and unsafe water practices in Indigenous populations in Canada leading to foodborne and waterborne illness. Most studies reported that foodborne illnesses occurred primarily in children up to 14 years of age and females, and that overcrowded housing and food sharing may be potential vehicles for transmission of illness. Walrus, seal, caribou and whale—especially when eaten raw or were fermented by processes that do not inhibit the growth of pathogens—were associated with an increased risk for foodborne illness.

There are several limitations to consider when reviewing these results. First, the review identified only 21 studies conducted over the last 50 years. Error and bias could have been introduced during the screening process, with some articles being missed or incorrectly included/excluded in the review. Additionally, the search was limited to documents in the English language. We identified studies that reported the belief that retail food consumption was linked to foodborne illness but there is currently no evidence for this, therefore it deserves further study. Likewise, a fear of tap water was reported and although this has been a problem in some Indigenous communities Footnote 32 it is uncertain whether it is linked with illness in all communities. It appears the risk of drinking untreated brook water may be underestimated which deserves further study.

Overall, Indigenous populations in Canada face unique sources of infections due to environmental and social factors. More research is needed to better understand these issues and whether different public health approaches may be needed for effective prevention. When researching ways to decrease foodborne illness and unsafe water practices in Indigenous communities, cultural implications should be considered. For example, it is important to acknowledge that although foodborne illness may be linked to the consumption of traditional foods, these foods also have many health benefits and are essential to wellbeing. The preparation and consumption of traditional foods help to reinforce Indigenous culture and identity Footnote 33 and contribute to the total diet, as they are rich in iron, zinc and protein Footnote 34. Likewise, although food sharing was associated with foodborne infections, Indigenous populations value social connectedness which brings many benefits to their health, well-being, spirituality and community spirit. All these factors should be carefully considered when developing food safety guidance. Programs are more likely to be effective if they are designed with community input and respect for Indigenous knowledge systems and cultural food ways Footnote 7. For example, the government of Nunavut has been developing guidelines for food safety when serving country food in government-funded facilities and community programs Footnote 35. These guidelines could be considered and applied in other contexts.

The influence of climate change on foodborne illnesses in Indigenous communities and its impact on the health care system merits further examination. This is particularly relevant as higher temperatures may result in increasing temperature-sensitive foodborne illnesses such as botulism Footnote 7Footnote 36 which in turn may result in significant financial costs to the health care system.

There is limited research that examines the unique food safety and water safety challenges that Indigenous populations in Canada face that may be associated with their environment, traditional foods, and food preparation techniques as well as social and cultural beliefs and practices. It appears that consumption of certain game meats, as well as the use of traditional fermentation practices, may lead to increased risk for foodborne illness among the Indigenous population. Further research is needed to inform culturally appropriate food safety practices.

The authors would like to thank Jackie Stapleton, the academic librarian for the School of Public Health and Health Systems at the University of Waterloo, for assisting them in the development of search strings and establishment of proper screening methodology.