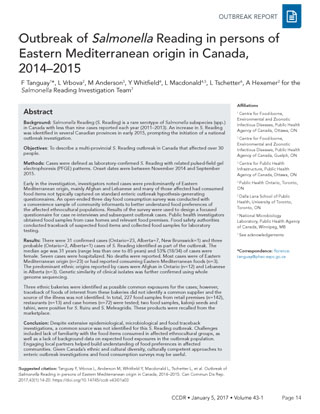 Outbreak of Salmonella Reading in persons of Eastern Mediterranean origin in Canada, 2014–2015

Background: Salmonella Reading (S. Reading) is a rare serotype of Salmonella subspecies (spp.) in Canada with less than nine cases reported each year (2011–2013). An increase in S. Reading was identified in several Canadian provinces in early 2015, prompting the initiation of a national outbreak investigation.

Objectives: To describe a multi-provincial S. Reading outbreak in Canada that affected over 30 people.

Results: There were 31 confirmed cases (Ontario=23, Alberta=7, New Brunswick=1) and three probable (Ontario=2, Alberta=1) cases of S. Reading identified as part of the outbreak. The median age was 31 years (range less than one to 85 years) and 53% (18/34) of cases were female. Seven cases were hospitalized. No deaths were reported. Most cases were of Eastern Mediterranean origin (n=23) or had reported consuming Eastern Mediterranean foods (n=3). The predominant ethnic origins reported by cases were Afghan in Ontario (n=12) and Lebanese in Alberta (n=3). Genetic similarity of clinical isolates was further confirmed using whole genome sequencing.

Three ethnic bakeries were identified as possible common exposures for the cases; however, traceback of foods of interest from these bakeries did not identify a common supplier and the source of the illness was not identified. In total, 227 food samples from retail premises (n=142), restaurants (n=13) and case homes (n=72) were tested; two food samples, kalonji seeds and tahini, were positive for S. Ruiru and S. Meleagridis. These products were recalled from the marketplace.

Conclusion: Despite extensive epidemiological, microbiological and food traceback investigations, a common source was not identified for this S. Reading outbreak. Challenges included lack of familiarity with the food items consumed in affected ethnocultural groups, as well as a lack of background data on expected food exposures in the outbreak population. Engaging local partners helped build understanding of food preferences in affected communities. Given Canada's ethnic and cultural diversity, culturally competent approaches to enteric outbreak investigations and food consumption surveys may be useful.

Salmonellosis is one of the most common causes of food-borne outbreaks and typically results in diarrhea, fever and abdominal pain. The most common species of this gram-negative bacteria is S. enterica and this is further divided into six subspecies and many serotypes (or serovars). S. Reading is a rare serotype in Canada: there were seven cases reported in 2012 to the National Enteric Surveillance Program (NESP) and nine cases reported in 2013 Footnote 1Footnote 2. The NESP is a laboratory-based surveillance system that provides weekly analysis and reporting for laboratory-confirmed cases of enteric pathogens in Canada. The objective of this article is to describe a multi-provincial S. Reading outbreak in Canada that affected over 30 people.

Cases were identified between January 21 and August 25, 2015. The case definitions used during this investigation were:

Initial public health investigations were conducted by public health units for all salmonellosis cases, as per routine practice. Outbreak case questionnaires were collected and centrally analyzed by the investigation team where available. Until May 4, 2015, available cases were re-interviewed using a standardized hypothesis-generating questionnaire. Interviews focused on foods identified during initial case follow up and thought to be frequently consumed by individuals of Eastern Mediterranean origin (see definition below). These included sesame seeds, tahini, pistachios and black (onion/nigella/kalonji) seeds. Supplementary questions were developed to identify a possible link between cases in Alberta and Ontario (e.g. a visitor from Ontario and/or food brought directly from Ontario to Alberta).

In May 2015, field epidemiologists were deployed to assist the investigation team and to collaborate with local public health units and community partners as they conducted an open-ended, detailed three day food consumption survey. Participants were made up of convenience samples of populations affected by the outbreak to identify additional food items typically consumed. In-person interviews were conducted, using approaches that aimed to respect cultural differences and adapt services to meet unique needs within the identified culture Footnote 4Footnote 5. In Alberta, an environmental health officer fluent in Arabic participated in case interviews and three day food consumption surveys and cases were re-interviewed in their homes. In Ontario, volunteers from the affected groups (community informants) were interviewed in community-based settings (e.g. community centres). Findings of the three day food consumption survey informed the development of a focused questionnaire.

Pulsed-field gel electrophoresis (PFGE) was done on all S. Reading isolates. A request was then sent to PulseNet USA and PulseNet International to find PFGE matches to this cluster. An EPIS (European Centre for Disease Control's [ECDC] Epidemic Intelligence Information System) notification was used to inquire whether any PFGE matches to the isolates in this cluster had been reported to the ECDC. Whole genome sequencing (WGS) was conducted for cases and select background isolates. A maximum-likelihood phylogenetic tree, generated through the use of the SNV Phyl Pipeline developed by the Bioinformatics Unit of the National Microbiology Laboratory, was used to determine the level of relatedness among isolates based on single nucleotide variant positions (SNVs). SNV Phyl phylogeny was built using 642 hqSNVs identified across 93% of the reference genome (SPAdes assembled genome of isolate 15-0793).

The PFGE pattern combinations ReadXAI.0015/ ReadBNI.0007 (n=1) and ReadXAI.0018/ ReadBNI.0010 (n=2) were both new pattern combinations that were not considered closely related to the patterns associated with confirmed cases; cases with these patterns were included in the outbreak investigation as probable cases based on their exposure to Eastern Mediterranean food. These isolates were not included in the WGS.

Given the shape of the epidemic curve and the long range in case onset dates, the investigation focused on the hypothesis that a shelf stable food item was the potential source of the outbreak. Initially, sesame seeds, tahini, kalonji/black seeds and Eastern Mediterranean baked goods ('sweets'), including ingredients/toppings on sweets, such as pistachios, were suspect food items and hypothesized as potential outbreak sources. Following re-interview of Alberta cases, as well as data collected from open-ended food histories with members of the affected community, Halal beef was also hypothesized as a common source of exposure.

In some instances, cases were reluctant to provide information on foods eaten in the three days prior to illness onset. Open-ended interviews with community key informants of Eastern Mediterranean origin in both Ontario and Alberta uncovered recurring themes that suggest potential barriers to eliciting this information (see Text Box).

Food samples for laboratory testing were obtained from case homes, restaurants and retail food premises. In total, over 200 samples were tested by the CFIA, Public Health Ontario and Alberta provincial laboratories for presence of Salmonella spp. A summary of food samples collected and microbiologic results is provided in Table 1. One sample of tahini sauce tested positive for Salmonella Ruiru (recalled on February 26, 2014) and one sample of kalonji whole seeds tested positive for Salmonella Meleagridis (recalled on March 1, 2015).

This investigation adds to the literature exploring cultural factors (including barriers) related to outbreak investigation and control Footnote 19Footnote 20. It illustrates the importance of cultural competence, i.e. "the knowledge, skills and attitudes […] that are necessary for providing health information, education and services among diverse groups" Footnote 4 for effective public health practice and restates that communicable disease outbreak investigations are aided by a culturally competent approach Footnote 21Footnote 22. Multiple strategies were used to address the critical ethnocultural component of this investigation. Public health personnel, including field epidemiologists, encountered barriers to hypothesis generation due to a lack of reference data on food preferences of the affected ethnocultural communities. To overcome this barrier, the initial questionnaire was tailored towards food items thought to be frequently consumed by individuals of Eastern Mediterranean origin. Additional effort was then invested in a three day food consumption history survey. Interviews were conducted by an Arabic-speaking environmental health officer and/or in partnership with a facilitator known to local public health through established community networks. Cases and community respondents were interviewed in their homes or in familiar community settings to build trust and promote information sharing. Interviews conducted in homes also provided the opportunity to collect food samples.

While resource intensive, these approaches proved invaluable for mitigating language and cultural barriers and for informing the development of the outbreak questionnaire and re-interview tool. Interestingly, despite disparate geographies and different ethnocultural communities affected by the outbreak in Ontario and Alberta, investigators in both jurisdictions aimed for a culturally competent approach that resulted in similar information gathering. This suggests that similar approaches could be adapted to meet the needs of different ethnocultural communities involved in outbreak investigations.

CFIA and provincial laboratories involvement in this investigation was crucial given the number of food samples that were submitted and analyzed. A challenge with a protracted outbreak investigation is that retail samples tested throughout the investigation are unlikely to be representative of the produce that was available at the time of case exposure. Moreover, data detailing the exact date(s) and location(s) of purchase of food items of interest were not available from all cases or small retail premises, which limited the ability of the CFIA to conduct traceback investigations.

Finally, the importance of molecular sub-typing in outbreak investigations cannot be overemphasized. As in many other countries, outbreak investigations in Canada are supported by skilled experts at PulseNet Canada. The ability to conduct PFGE supports identification of geographically disparate clusters that would otherwise be undetected. Reading is a rare Salmonella serotype and isolates were sent to the National Microbiology Laboratory for serotyping confirmation or designation. Thus, challenges in the timeliness of case reporting were encountered. For example, the extended delays between case onset and confirmation of an outbreak case resulted in delayed case interviews and food sampling.

Despite extensive epidemiological, microbiological and traceback investigations, a common source for this S. Reading outbreak was not identified. The identification of specific foods was challenging due to investigators' initial lack of familiarity with frequently consumed food items among affected individuals of Eastern Mediterranean origin, potential language and cultural barriers to case interviews, as well as a lack of background data on expected food exposures in the outbreak population.

Given Canada's ethnic and cultural diversity, cultural competence in approaches to enteric outbreak investigations and food consumption surveys may be useful. Specifically, routine inclusion of questions about ethnicity and/or ethnic foods on hypothesis-generating questionnaires would be of value. Socio-demographic data (income, housing, ethnicity, etc.) are typically not collected by communicable disease outbreak investigators; however, when relevant to exposure data, the information becomes critical. Consideration should also be given to adjusting the food items questioned and terminology adapted to be conducive to the cultures/communities involved. Additional investigative methods following initial case interviews may be indicated. For example, population food consumption surveys in the affected community or in-person open-ended interviews. Addressing the current national reference data gaps on food consumption in ethnocultural minority groups is also needed.

The outbreak investigation team and/or its partners would benefit from cultural competence skills in outbreaks that have an ethnocultural component to identify and address potential barriers. This may involve considering relevant evidence from other areas of public health practice (e.g. health promotion) and/or partnering with local public health and their existing community networks to engage effectively with individuals and ethnocultural and linguistic groups. Appropriate and relevant training to promote cultural competence among Canadian public health professionals, particularly those involved in enteric outbreak investigation, would aid in the implementation of the recommendations.