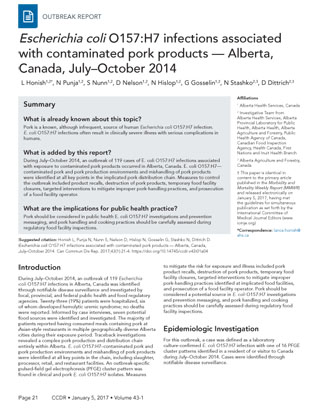 Pork should be considered in public health E. coli O157:H7 investigations and prevention messaging, and pork handling and cooking practices should be carefully assessed during regulatory food facility inspections.

For this outbreak, a case was defined as a laboratory culture-confirmed E. coli O157:H7 infection with one of 16 PFGE cluster patterns identified in a resident of or visitor to Canada during July–November 2014. Cases were identified through notifiable disease surveillance.

A total of 119 outbreak cases were identified, including four (3%) patients who were classified as having secondary infections (i.e., acquired through household contact with an outbreak-associated patient). All patients were in Alberta during all or part of the incubation period. Illness onsets for the 119 patients ranged from July 20 to October 6 (Figure 1). Cases occurred among persons in a wide geographical distribution across Alberta. Twenty-three (19%) patients were hospitalized, six of whom developed hemolytic uremic syndrome; no deaths were reported. The median age of patients was 23 years (range = 1– 82 years) and 76 patients (64%) were female.

Exposure to food at Alberta Asian-style restaurants (36 facilities widely distributed across the province) was reported by 85 (74%) of the 115 primary outbreak patients. Routine public health follow-up interviews failed to identify the source. Enhanced interviews with patients and follow-up at restaurants revealed that the exposure-specific frequency for each of seven ingredients (mung bean sprouts, beef, carrots, cucumbers, green onions, lettuce, and pork) exceeded 35%.

Regulatory agencies conducted inspections at 201 food facilities to inform the investigation and control the outbreak. Extensive investigation of Alberta mung bean sprout supplier/distributor facilities ruled out this product as a source. A traceback investigation was initiated that focused on suppliers of the six remaining high exposure-frequency foods. No single common restaurant supplier was identified for these foods. Pork was identified as the only ingredient with a supplier network entirely within Alberta, and thus emerged as the leading hypothesized source of the outbreak. Confirmation of the complex intra-Alberta pork supplier network (Figure 2) revealed that exposure to food from a facility within the network was the most common identified exposure (Table 1) among primary outbreak case patients (96/115, 83%). Most of these exposures occurred at restaurants (81, 84%). Consumption of pork was identified among 65% of outbreak case patients. A total of 295 samples, including environmental surface swabs (n = 157), food (116), food surface swabs (13), and water (9), were collected analyzed for the presence of E. coli O157:H7. A range of sample types were collected during hypothesis generation; sample collection later focused on pork and pork production environments, as informed by the investigation. E. coli O157:H7 was identified in 18 samplesFootnote *, all of which were from pork or pork products or surface swabs in pork production facilities. Apart from two isolates from a slaughter facility, PFGE cluster patterns identified in patient isolates matched those in food and environmental sample isolates. Four outbreak cases were associated with exposure to chicken sausage products from one facility; laboratory analysis of the products identified E. coli O157:H7, detected pork, and did not detect poultry. Investigation revealed that the chicken product producer had purchased pork fraudulently labeled as chicken by an illegal distributor linked to a facility in the Alberta pork supplier network.

The local health department ordered four food facilities, including one slaughter/retail facility, two processor/distributor/retail facilities and one restaurant facility, to temporarily close, as a result of significant numbers of cases associated with exposure to food distributed by the facility, identified critical food handling violations and/or E. coli O157:H7-positive surface swabs. The illegal pork distributor fraudulently selling pork as chicken was issued court orders to close the business and to appear for questioning. The operator failed to appear, and an arrest warrant was issued. The Canadian Food Inspection Agency issued recall notices for pork products (and chicken products containing pork) distributed by six facilities. Multiple news releases were issued to local media outlets to inform the public of the outbreak investigation.

Root cause analyses were conducted by food regulatory agencies at four slaughter facilities implicated in the pork supplier network. All facilities slaughtered multiple species, including cattle. Common observations included opportunities for cross-contamination related to sharing of animal pens, inadequate cleaning and sanitation of knives or equipment between carcasses, and close proximity of carcasses during slaughter activities. At the slaughter facility that was temporarily closed, inconsistent personnel hygiene practices and poor knowledge of food safety were also identified. Corrective actions related to sanitary dressing procedures, process flow, hygiene, hand-washing, cleaning and sanitation were initiated and monitored through routine inspections. Products suspected of being contaminated were removed from one facility.

Environmental Health Officers (EHOs) with the local health department conducted comprehensive assessment of pork-handling practices and other potential contributing factors at 111 restaurants (those at which patients were thought to have acquired their infection and additional selected similar restaurants in Alberta). EHOs observed practices used by operators at baseline, surveyed them about their procedures using a standardized questionnaire and used this information to inform intervention strategies. Few operators had validated or standardized procedures for cooking pork products and the majority used visual indicators to ascertain whether pork products were adequately cooked. Cross-contamination concerns that might have contributed to infection were identified in several restaurants. EHOs identified that staff with adequate food safety training at >80% of facilities often did not have direct oversight of day-to-day food handling activities. Interventions and ongoing monitoring programs with short, intermediate and long-term objectives were implemented at the facilities to mitigate identified problems. This phased approach included delivery of onsite food safety training by EHOs, development and distribution of educational resources in the first language of employees (printed and online) and assistance with the creation of food safety plans for properly cooking pork products. Mitigation strategies included the distribution of digital thermometers and digital timers by EHOs. During on-site training sessions, EHOs demonstrated proper hand-washing and environmental surface sanitation procedures, and identified other strategies operators could use to reduce the likelihood of cross-contamination. Compliance with these food safety elements was measured before and after mitigation strategies were carried out to help evaluate selected intervention measures.

This outbreak represents the second largest foodborne and third largest overall E. coli O157:H7 outbreak in Canadian history, after a foodborne outbreak associated with salami produced in British Columbia in 1999 Footnote 1 and after a waterborne outbreak in Walkerton, Ontario in 2000 Footnote 2. There is strong epidemiological evidence that the cause of this outbreak was exposure to contaminated pork products produced and distributed in Alberta. The molecular epidemiology of the clinical and pork E. coli O157:H7 outbreak isolates is described elsewhere Footnote 3. Pork is a known, although infrequent, source of human E. coli O157 infection Footnote 4Footnote 5Footnote 6Footnote 7Footnote 8. Most documented outbreaks have been associated with sausage products containing pork and other meats, and the species-specific source of contamination was not confirmed. It has been reported that E. coli O157:H7 is prevalent globally at varying rates in swine, that infected swine might shed the bacteria for prolonged periods and horizontal transmission between swine and other livestock species might occur Footnote 9.

E. coli O157:H7-contaminated pork and pork production environments and mishandling of pork products was identified at all key points in the implicated Alberta pork distribution chain, including slaughter, processor, retail and restaurant facilities. The originating source or sources of the contamination was however not confirmed. Cross-contamination appears to be an important contributing factor in this outbreak, as evidenced by absence of known pork exposure in 35% of outbreak cases. Based on the findings of this investigation, pork should be considered a potential source in public health E. coli O157:H7 investigations and prevention messaging, and pork handling and cooking practices should be carefully assessed during regulatory food facility inspections.