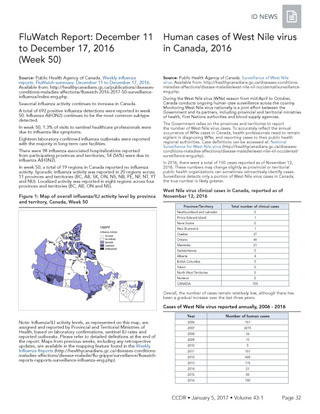 A total of 692 positive influenza detections were reported in week 50. Influenza A(H3N2) continues to be the most common subtype detected.

In week 50, 1.3% of visits to sentinel healthcare professionals were due to influenza-like symptoms.

Eighteen laboratory-confirmed influenza outbreaks were reported with the majority in long-term care facilities.

There were 98 influenza-associated hospitalizations reported from participating provinces and territories 54 (56%) were due to influenza A(H3N2).

In week 50, a total of 19 regions in Canada reported no influenza activity. Sporadic influenza activity was reported in 20 regions across 11 provinces and territories (BC, AB, SK, ON, NS, NB, PE, NF, NT, YT and NU). Localized activity was reported in eight regions across four provinces and territories (BC, AB, ON and NS).

Note: Influenza/ILI activity levels, as represented on this map, are assigned and reported by Provincial and Territorial Ministries of Health, based on laboratory confirmations, sentinel ILI rates and reported outbreaks. Please refer to detailed definitions at the end of the report. Maps from previous weeks, including any retrospective updates, are available in the mapping feature found in the Weekly Influenza Reports.

During the West Nile virus (WNv) season from mid-April to October, Canada conducts ongoing human case surveillance across the country. Monitoring West Nile virus nationally is a joint effort between the Government and its partners, including provincial and territorial ministries of health, First Nations authorities and blood supply agencies.

The Government relies on the provinces and territories to report the number of West Nile virus cases. To accurately reflect the annual occurrence of WNv cases in Canada, health professionals need to remain vigilant in diagnosing WNv, and reporting cases to their public health regional authorities. Case definitions can be accessed at: National Surveillance for West Nile virus.

In 2016, there were a total of 100 cases reported as of November 12, 2016. These numbers may change slightly as provincial or territorial public health organizations can sometimes retroactively identify cases. Surveillance detects only a portion of West Nile virus cases in Canada; the true number is likely greater.

Overall, the number of cases remain relatively low, although there has been a gradual increase over the last three years.