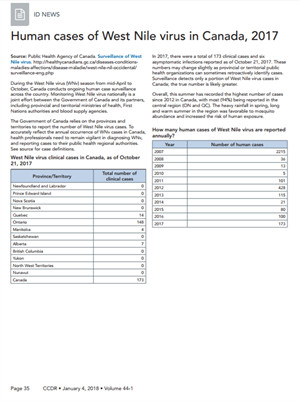 During the West Nile virus (WNv) season from mid-April to October, Canada conducts ongoing human case surveillance across the country. Monitoring West Nile virus nationally is a joint effort between the Government and its partners, including provincial and territorial ministries of health, First Nations authorities and blood supply agencies.

The Government relies on the provinces and territories to report the number of West Nile virus cases. To accurately reflect the annual occurrence of WNv cases in Canada, health professionals need to remain vigilant in diagnosing WNv, and reporting cases to their public health regional authorities. See source for case definitions.

In 2017, there were a total of 173 clinical cases and six asymptomatic infections reported as of October 21, 2017. These numbers may change slightly as provincial or territorial public health organizations can sometimes retroactively identify cases. Surveillance detects only a portion of West Nile virus cases in Canada; the true number is likely greater.

Overall, this summer has recorded the highest number of cases since 2012 in Canada, with most (94%) being reported in the central region (ON and QC). The heavy rainfall in spring, long and warm summer in the region was favourable to mosquito abundance and increased the risk of human exposure.