Challenges of an invasive Streptococcus pneumoniae outbreak in a marginalized population 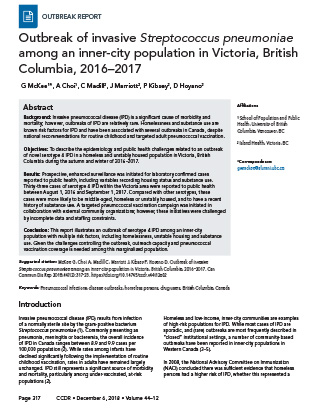 Outbreak of invasive Streptococcus pneumoniae among an inner-city population in Victoria, British Columbia, 2016–2017

Background: Invasive pneumococcal disease (IPD) is a significant cause of morbidity and mortality; however, outbreaks of IPD are relatively rare. Homelessness and substance use are known risk factors for IPD and have been associated with several outbreaks in Canada, despite national recommendations for routine childhood and targeted adult pneumococcal vaccination.

Objectives: To describe the epidemiology and public health challenges related to an outbreak of novel serotype 4 IPD in a homeless and unstably housed population in Victoria, British Columbia during the autumn and winter of 2016–2017.

Results: Prospective, enhanced surveillance was initiated for laboratory confirmed cases reported to public health, including variables recording housing status and substance use. Thirty-three cases of serotype 4 IPD within the Victoria area were reported to public health between August 1, 2016 and September 1, 2017. Compared with other serotypes, these cases were more likely to be middle-aged, homeless or unstably housed, and to have a recent history of substance use. A targeted pneumococcal vaccination campaign was initiated in collaboration with external community organizations; however, these initiatives were challenged by incomplete data and staffing constraints.

Conclusion: This report illustrates an outbreak of serotype 4 IPD among an inner-city population with multiple risk factors, including homelessness, unstable housing and substance use. Given the challenges controlling the outbreak, outreach capacity and pneumococcal vaccination coverage is needed among this marginalized population.

Invasive pneumococcal disease (IPD) results from infection of a normally sterile site by the gram-positive bacterium Streptococcus pneumoniae Footnote 1. Commonly presenting as pneumonia, meningitis or bacteremia, the overall incidence of IPD in Canada ranges between 8.9 and 9.9 cases per 100,000 population Footnote 2. While rates among infants have declined significantly following the implementation of routine childhood vaccination, rates in adults have remained largely unchanged. IPD still represents a significant source of morbidity and mortality, particularly among under-vaccinated, at-risk populations Footnote 2.

Homeless and low-income, inner-city communities are examples of high-risk populations for IPD. While most cases of IPD are sporadic, and (rare) outbreaks are most frequently described in “closed” institutional settings, a number of community-based outbreaks have been reported in inner-city populations in Western Canada Footnote 3Footnote 4Footnote 5. In 2008, the National Advisory Committee on Immunization (NACI) concluded there was sufficient evidence that homeless persons had a higher risk of IPD, whether this represented a causal linkage or a reflection of the risk factors disproportionately present in homeless individuals Footnote 3Footnote 5Footnote 6Footnote 7.

Given that the serotypes attributable to these outbreaks have been among those included in widely-available pneumococcal vaccines, there are considerable opportunities for intervention Footnote 8. NACI recommends that the 23-valent pneumococcal polysaccharide vaccine be provided to homeless persons, as well as those using substances; however, accessing this population has proven challenging, particularly given its transience.

Victoria has a population of approximately 86,000, over 1,700 of whom are homeless or under-housed Footnote 9Footnote 10. A considerable portion of the homeless population is transient, with 28% having moved to Victoria within the past year Footnote 9. Outreach, street nurse and public health services are provided by Island Health, one of five British Columbia (BC) regional health authorities; however, the capacity of these services to serve a dual harm reduction and communicable disease prevention role has been limited. The confluence of rising homelessness, inadequate staffing and competing priorities due to the opioid overdose epidemic have created additional challenges, complicating the response to a serotype 4 IPD outbreak in Victoria, BC, that was detected in the fall of 2016.

The objective of this report is to describe the epidemiology of a community-based serotype 4 IPD outbreak in a homeless and unstably housed population in Victoria, BC, and to describe the associated challenges in the implementation of public health investigations and interventions.

In August 2016, the specialized communicable disease nurses who routinely receive notifications of reportable diseases observed an increase in cases of serotype 4 IPD (predominantly pneumonia), while at the same time the local hospital’s medical microbiologists reported an unusually high number of intensive care unit admissions for homeless, inner-city patients with invasive pneumococcal infection. Regional routine surveillance alerts, which compare counts of reportable diseases to historical 5-year averages, noted an increase in reported cases of IPD, as did the provincial system which issues alerts based on statistical discrepancies between the observed data and historical patterns. According to regional surveillance, the number of IPD cases reported in September 2016 was eight times higher than the 5-year monthly average, while October 2016 experienced a 3-fold increase. In light of these multiple signals, the Medical Health Officer declared an outbreak of serotype 4 IPD in October 2016.

IPD has been reportable in BC since 1999 and nationally notifiable in Canada since 2000 Footnote 1Footnote 11. In BC, a case of IPD is defined by clinical evidence of invasive disease with laboratory confirmation of Streptococcus pneumoniae from a normally sterile site, such as blood and CSF, but excluding the middle ear Footnote 12.

All samples were collected at Island Health facilities. S. pneumoniae isolates were cultured and evaluated for drug sensitivity at Royal Jubilee Hospital in Victoria, BC. Further serotyping was performed at the National Microbiology Laboratory. Cases identified by laboratory physicians that met the definition of IPD were reported to public health. Data from all cases of invasive pneumococcal disease in the surrounding region (Southern Island Health Service Delivery Area of Island Health) were collated in Microsoft Excel (Microsoft Corporation, Redmond, Washington, United States) from standardized case report forms used for routine surveillance, as well as electronic medical records.

A total of 84 cases of IPD within the South Island Health Service Delivery Area (HSDA) were reported to public health between August 1, 2016 and September 1, 2017. Whereas only three cases of S. pneumoniae serotype 4 were reported within the prior 4.5 years, 33 were identified during the study period, comprising 39.3% of all reported cases of IPD (Figure 1A and 1B).


Case reports of serotype 4 peaked in September and October 2016 and persisted throughout the study period, slowing down by March 2017 (Figure 2).

In response to the outbreak, Island Health’s Street Outreach Program initiated a campaign to increase uptake of 23-valent polysaccharide vaccine containing serotype 4, which was significantly bolstered through collaborations with several inner-city service providers that had pre-existing relationships with those at highest risk of infection. Approximately 100 doses were administered between August 2016 and September 2017 by street outreach nurses, while over 80 additional doses were administered by other providers serving this at-risk population.

By April 2017, the total number of reported IPD cases had declined to levels comparable to the baseline average. Following persistent, low numbers of reported cases over the subsequent months, it was concluded that enhanced surveillance was no longer necessary; however, the proportion of IPD cases due to serotype 4 remained higher than pre-outbreak levels, suggesting persistent low-level circulation.

Despite ongoing endemicity of pneumococcal infection in Canada, outbreaks of invasive pneumococcal disease are relatively rare. Serotype 4 is reported to have a high level of invasiveness, although some studies have suggested that this may be more strongly linked to capsular composition than serotype Footnote 13. Nonetheless, invasive serotypes are often implicated in outbreaks of IPD, such as the serotype 5 outbreaks reported in Canada Footnote 3Footnote 5. This report adds to the limited literature available on outbreaks of serotype 4 IPD. Given the characteristics of the homeless population affected by this outbreak and what is known about the risks of IPD, strengthening targeted prevention programs may be indicated.

The implication of a vaccine-preventable serotype Footnote 4 in this outbreak suggests the current approach to administering recommended vaccines among this at-risk population is not entirely effective. Despite the NACI recommendations to offer pneumococcal vaccine to homeless individuals and people who used drugs, these populations are often difficult to reach. The limited capacity for street nurses to provide outreach services to the inner-city population presented a challenge both prior to and during the outbreak. Despite pre-existing staffing constraints, this service was further challenged by competing priorities associated with the response to the opioid crisis. Transmission of pneumococcus may thus have been exacerbated by a decrease in targeted pneumococcal vaccination in the preceding year due to this limited street outreach capacity within the Victoria region. These deficiencies were recognized during the outbreak and an additional position was created to bolster the service.

The targeted pneumococcal vaccination campaign represented a core component of the public health response to the IPD outbreak. It is difficult to determine the degree to which the efforts to expand uptake contributed to the observed reduction in new onset cases. Similar vaccine campaigns designed to curtail IPD outbreaks have reported mixed results Footnote 3Footnote 5.

In addition to staffing constraints and incomplete vaccination records, other challenges limited the extent of the investigation. As we relied on retrospective chart review for information about case risk factors, under-reporting of risk factors may have introduced misclassification bias. While the standard practice for public health nurses within the health authority involves no direct follow-up of IPD cases, interviews may have provided additional details, allowing for better insight into potential transmission patterns. In the future, further analysis of contact networks may allow for identification of potential sites of transmission, such as a specific shelter or gathering place, which could inform targeted public health measures.

This report illustrates an outbreak of serotype 4 invasive pneumococcal disease among an inner-city population with multiple risk factors for transmission, including homelessness, unstable housing and substance use. It also reinforces the ongoing need to improve outreach capacity and pneumococcal vaccine coverage among this marginalized population.

All authors were involved in conceptualization, analysis/interpretation of data, and drafting of the manuscript. GM, AC, CM and JM were also involved in data collection.

We would like to acknowledge the Island Health and community partners who were instrumental in managing this outbreak, both through care provision, social supports, and assistance with the vaccination campaign, as well as the National Microbiology Laboratory for their role in serotyping the samples. We would also like to acknowledge Angela Reid, surveillance analyst at Island Health, for providing data support, and Dr. Monika Naus, Medical Director for the Communicable Diseases & Immunization Service at the BC Centre for Disease Control, for reviewing the manuscript.

BC Centre for Disease Control. List of Reportable Communicable Diseases in BC, July 2009. Vancouver (BC); BC CDC: 2009. http://www.bccdc.ca/resource-gallery/Documents/Guidelines%20and%20Forms/Guidelines%20and%20Manuals/Epid/Other/Epid_Guidelines_reportable_diseases_British_Columbia_July2009.pdf