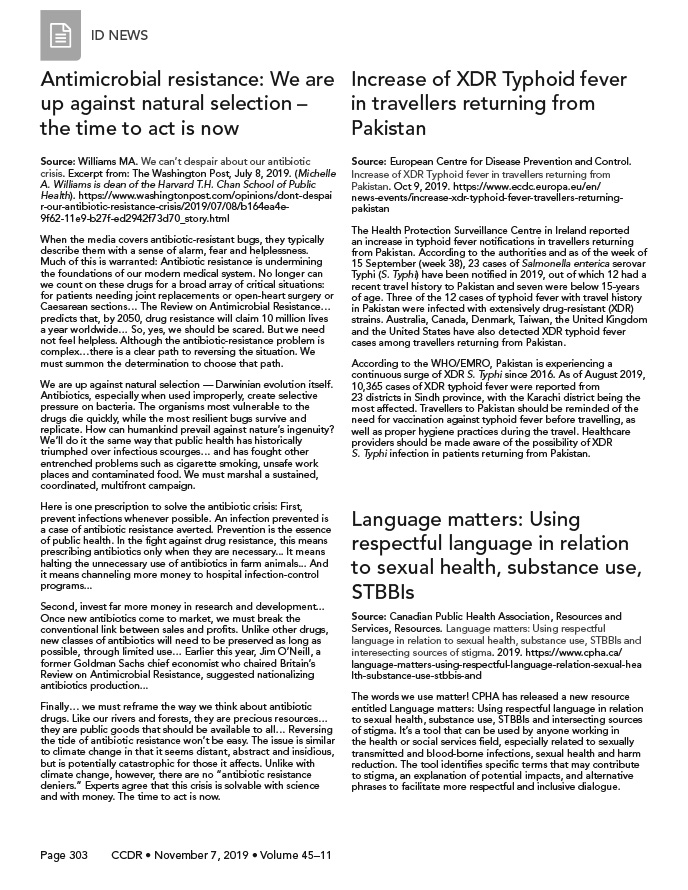 Antimicrobial resistance: We are up against natural selection – the time to act is now

Source: Williams MA. We can’t despair about our antibiotic crisis. Excerpt from: The Washington Post, July 8, 2019. (Michelle A. Williams is dean of the Harvard T.H. Chan School of Public Health). https://www.washingtonpost.com/opinions/dont-despair-our-antibiotic-resistance-crisis/2019/07/08/b164ea4e-9f62-11e9-b27f-ed2942f73d70_story.html

When the media covers antibiotic-resistant bugs, they typically describe them with a sense of alarm, fear and helplessness. Much of this is warranted: Antibiotic resistance is undermining the foundations of our modern medical system. No longer can we count on these drugs for a broad array of critical situations: for patients needing joint replacements or open-heart surgery or Caesarean sections… The Review on Antimicrobial Resistance… predicts that, by 2050, drug resistance will claim 10 million lives a year worldwide… So, yes, we should be scared. But we need not feel helpless. Although the antibiotic-resistance problem is complex…there is a clear path to reversing the situation. We must summon the determination to choose that path.

We are up against natural selection — Darwinian evolution itself. Antibiotics, especially when used improperly, create selective pressure on bacteria. The organisms most vulnerable to the drugs die quickly, while the most resilient bugs survive and replicate. How can humankind prevail against nature’s ingenuity? We’ll do it the same way that public health has historically triumphed over infectious scourges… and has fought other entrenched problems such as cigarette smoking, unsafe workplaces and contaminated food. We must marshal a sustained, coordinated, multifront campaign.

Here is one prescription to solve the antibiotic crisis: First, prevent infections whenever possible. An infection prevented is a case of antibiotic resistance averted. Prevention is the essence of public health. In the fight against drug resistance, this means prescribing antibiotics only when they are necessary… It means halting the unnecessary use of antibiotics in farm animals… And it means channeling more money to hospital infection-control programs…

Second, invest far more money in research and development… Once new antibiotics come to market, we must break the conventional link between sales and profits. Unlike other drugs, new classes of antibiotics will need to be preserved as long as possible, through limited use… Earlier this year, Jim O’Neill, a former Goldman Sachs chief economist who chaired Britain’s Review on Antimicrobial Resistance, suggested nationalizing antibiotics production…

Finally… we must reframe the way we think about antibiotic drugs. Like our rivers and forests, they are precious resources… they are public goods that should be available to all… Reversing the tide of antibiotic resistance won’t be easy. The issue is similar to climate change in that it seems distant, abstract and insidious, but is potentially catastrophic for those it affects. Unlike with climate change, however, there are no “antibiotic resistance deniers.” Experts agree that this crisis is solvable with science and with money. The time to act is now.

Increase of XDR Typhoid fever in travellers returning from Pakistan

The Health Protection Surveillance Centre in Ireland reported an increase in typhoid fever notifications in travellers returning from Pakistan. According to the authorities and as of the week of 15 September (week 38), 23 cases of Salmonella enterica serovar Typhi (S. Typhi) have been notified in 2019, out of which 12 had a recent travel history to Pakistan and seven were below 15-years of age. Three of the 12 cases of typhoid fever with travel history in Pakistan were infected with extensively drug-resistant (XDR) strains. Australia, Canada, Denmark, Taiwan, the United Kingdom and the United States have also detected XDR typhoid fever cases among travellers returning from Pakistan.

According to the WHO/EMRO, Pakistan is experiencing a continuous surge of XDR S. Typhi since 2016. As of August 2019, 10,365 cases of XDR typhoid fever were reported from 23 districts in Sindh province, with the Karachi district being the most affected. Travellers to Pakistan should be reminded of the need for vaccination against typhoid fever before travelling, as well as proper hygiene practices during the travel. Healthcare providers should be made aware of the possibility of XDR S. Typhi infection in patients returning from Pakistan.

The words we use matter! CPHA has released a new resource entitled Language matters: Using respectful language in relation to sexual health, substance use, STBBIs and intersecting sources of stigma. It’s a tool that can be used by anyone working in the health or social services field, especially related to sexually transmitted and blood-borne infections, sexual health and harm reduction. The tool identifies specific terms that may contribute to stigma, an explanation of potential impacts, and alternative phrases to facilitate more respectful and inclusive dialogue.