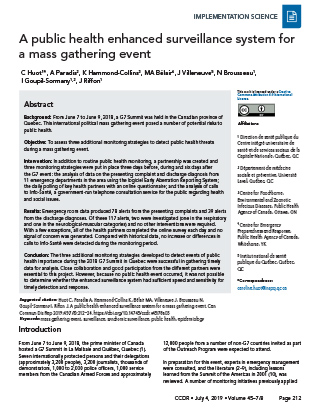 Background: From June 7 to June 9, 2018, a G7 Summit was held in the Canadian province of Quebec. This international political mass gathering event posed a number of potential risks to public health.

Intervention: In addition to routine public health monitoring, a partnership was created and three monitoring strategies were put in place three days before, during and six days after the G7 event: the analysis of data on the presenting complaint and discharge diagnosis from 11 emergency departments in the area using the logiciel Early Aberration Reporting System; the daily polling of key health partners with an online questionnaire; and the analysis of calls to Info-Santé, a government-run telephone consultation service for the public regarding health and social issues.

Results: Emergency room data produced 78 alerts from the presenting complaints and 39 alerts from the discharge diagnoses. Of these 117 alerts, two were investigated (one in the respiratory and one in the neurological-muscular categories) and no other interventions were required. With a few exceptions, all of the health partners completed the online survey each day and no signal of concern was generated. Compared with historical data, no increase or differences in calls to Info-Santé were detected during the monitoring period.

Conclusion: The three additional monitoring strategies developed to detect events of public health importance during the 2018 G7 Summit in Quebec were successful in gathering timely data for analysis. Close collaboration and good participation from the different partners were essential to this project. However, because no public health event occurred, it was not possible to determine whether the enhanced surveillance system had sufficient speed and sensitivity for timely detection and response.

From June 7 to June 9, 2018, the prime minister of Canada hosted a G7 Summit in La Malbaie and Québec, QuebecFootnote 1. Seven internationally protected persons and their delegations (approximately 3,200 people), 3,200 journalists, thousands of demonstrators, 1,000 to 2,000 police officers, 1,000 service members from the Canadian Armed Forces and approximately 12,000 people from a number of non-G7 countries invited as part of the Outreach Program were expected to attend.

In preparation for this event, experts in emergency management were consulted, and the literatureFootnote 2Footnote 3Footnote 4Footnote 5Footnote 6Footnote 7Footnote 8Footnote 9, including lessons learned from the Summit of the Americas in 2001Footnote 10, was reviewed. A number of monitoring initiatives previously applied during sportingFootnote 3Footnote 11Footnote 12Footnote 13Footnote 14Footnote 15Footnote 16Footnote 17Footnote 18Footnote 19, religiousFootnote 5Footnote 20Footnote 21 and artistic eventsFootnote 22Footnote 23 have been described previously. However, there was less detailed information available about surveillance during political events, especially those that are at risk for violent demonstrations or acts of terrorismFootnote 24Footnote 25.

In advance of the event, a number of potential public health threats were identified and prioritized for monitoring: rapid spread of certain infectious diseases; violence associated with demonstrations and use of crowd-control agents; potential for chemical, biological, radiological, nuclear or explosive (CBRNE) terrorist threats; and presence of suspicious packagesFootnote 26. Although the probability of these threats was considered lowFootnote 11Footnote 12Footnote 13Footnote 14Footnote 15Footnote 16Footnote 27, an enhanced surveillance system was needed to quickly detect potential public health threatsFootnote 28Footnote 29Footnote 30Footnote 31, as well as a rapid intervention plan for each of these threats.

Routine public health surveillance in Quebec relies on the mandatory reporting of notifiable diseases by physicians and laboratories, and on the passive reporting of perceived or real public health threats by various partners, including clinicians, government departments and local municipalitiesFootnote 32. However, these routine surveillance activities lacked the necessary sensitivity and timeliness to rapidly detect and respond to priority public health threats during the G7 SummitFootnote 33. To address this, the Direction de santé publique (DSPublique) of the Centre intégré universitaire de santé et de services sociaux de la Capitale-Nationale (Public Health Department of the National Capital Integrated University Health and Social Services Centre) developed an enhanced surveillance system that included activities for the period from June 4 to June 15, 2018 (three days before, three days during and six days after the event). The goal of the enhanced surveillance system was to develop a surveillance capacity that met the goals of early detection and acceptability to all participating partners.

The purpose of this article is to describe the development and outcome of three monitoring strategies that were part of the enhanced surveillance system during the 2018 G7 Summit, and to consider the implications of these strategies for public health surveillance during future mass gathering events.

Approximately six months before the event, a DSPublique project team began the development of an enhanced surveillance system. All of the region’s emergency departments (ED) already had in place electronic records for both presenting complaints (those given by patients to the triage nurses when they came into the ED) and medical discharge diagnoses (those given by a physician when the patient left the ED). Not all these data are usually available to the DSPublique, and they had not been previously used for public health surveillance. The EDs of six university hospital centres and five regional hospital centres within the event perimeter or nearby were invited to collaborate for this event. To ensure access to these data, additional partners from other Integrated University Health and Social Services Centre departments collaborated with the DSPublique project team.

In addition to the partners who directly contributed to the enhanced surveillance system, the region’s clinicians were informed of the project’s progress stage-by-stage through the emergency management structure, which was put on alert for the event. The Public Health Agency of Canada provided support, deploying two field epidemiologists for planning, analyzing data and producing reports. All the enhanced monitoring activities were timed to allow for rapid analysis and dissemination of results, decision-making and response. A daily report summarizing the results was prepared and distributed to the DSPublique, partners and decision-makers. Two versions (short and detailed), adapted to the target audiences, were available.

To enhance the sensitivity and timeliness of the surveillance system, while ensuring it remained acceptable to all partners, the following three monitoring activities were added to Notifiable Disease reporting and passive reporting for the period from June 4 to June 15, 2018:

For the ED electronic data, presenting complaints were recorded by the triage nurse following a patients’ arrival, and medical discharge diagnoses were recorded when the patient was ready to leave the ED. All university hospital patients were identified with a unique identifier number. These data were available the day after the visit. Electronic record data from all ED visits in the area surrounding the G7 Summit were incorporated into the enhanced surveillance system. This approach was acceptable to clinical partners because these data were already available for other purposes. However, it did create a slight increase in workload, as reminders were sent if there were entry delays.

The number of cases in each category was analyzed using the Centers for Disease Control and Prevention's Early Aberration Reporting SystemFootnote 35 software, which detects alerts or aberrations in the number of cases based on short-term historical data (ten days). All the generated alerts were compared with historic data for the period of April to July 2013–2017. A daily analysis of the previous day’s data was conducted, by emergency department and for all emergency departments combined. Age group, municipality of the cases and details on the presenting complaints and diagnoses were used when available. A team evaluation and decision were made regarding whether or not to further investigate each alert that was generated.

Key partners included Quebéc’s Poison Control Centre, the region's ambulance services, the Quebec Public Health Laboratory, the Coroner’s Office, Info-Santé and three temporary clinics. A short, three-question online questionnaire (Voxco Inc. platform)Footnote 36 was developed and sent to respondents from partner organizations on a daily basis (before, during and after the event) regarding infectious or environmental health threats. Questionnaires were completed by 10 am regarding information from the previous day.

Monitoring trends for calls to Info-Santé

Electronic data on the reasons for calling Info-Santé were already available to the DSPublique, but had not previously been used for surveillance. The most relevant reasons for calling were selected based on the priority threats (Table 1). These reasons were sorted into categories for enhanced surveillance. In each category, the number and percentage of calls were analyzed on a daily basis to detect any increase or change compared with historical data.

Emergency department data produced 78 alerts for the presenting complaint categories and generated 39 alerts in the various diagnosis categories. Among these 117 alerts, two were investigated (one for respiratory category and one for neurological-muscular category). No other intervention was required. Table 2 summarizes the number of alerts per category.

With a few exceptions, all of the partners completed the survey every day and few reminders were required. One of the three temporary clinics reported two cases of gastroenteritis. Ambulance services reported one case of opioid intoxication. Given that these reports did not exceed the expected frequency and there were no related health threats, none of these reports was investigated.

In analyzing the reasons for calls to Info-Santé, neither increases nor differences were detected during the monitoring period in comparison with historical data.

A three-pronged enhanced surveillance system, developed to detect events of public health importance during the 2018 G7 Summit in Quebec, was successful in gathering timely data for analysis. Most alerts were generated from the analysis of ED data. The use of historical data made it possible to limit the number of alerts for which an investigation was needed. The use of these data appeared to result in high sensitivity but low specificity.

A strength of this enhanced surveillance system was the close collaboration with a number of different partners. This collaboration was essential to the development of this enhanced surveillance system. The three additional monitoring strategies exhibited a high level of participation by the partners. This was likely because partners understood the importance of the additional monitoring and because only minimal additional time was required by participants. Thus, most data requested from the partners were received in a timely manner.

Three additional monitoring strategies developed to detect events of public health importance during the 2018 G7 Summit in Quebec were successful in gathering timely data for analysis. However, further assessment of speed and sensitivity is needed if applied to a future public health surveillance strategy of a mass gathering event.