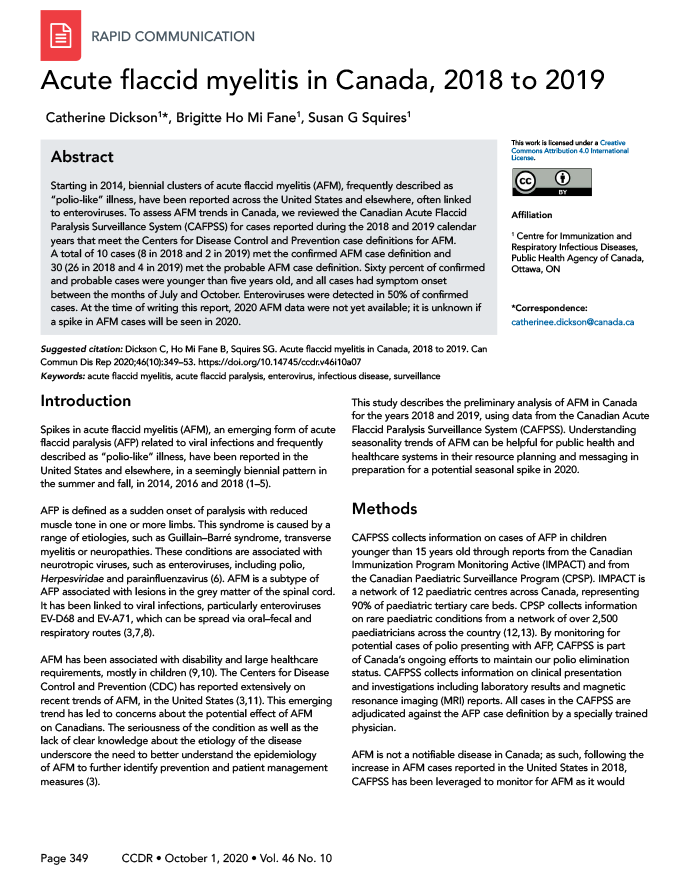 Starting in 2014, biennial clusters of acute flaccid myelitis (AFM), frequently described as “polio-like” illness, have been reported across the United States and elsewhere, often linked to enteroviruses. To assess AFM trends in Canada, we reviewed the Canadian Acute Flaccid Paralysis Surveillance System (CAFPSS) for cases reported during the 2018 and 2019 calendar years that meet the Centers for Disease Control and Prevention case definitions for AFM. A total of 10 cases (8 in 2018 and 2 in 2019) met the confirmed AFM case definition and 30 (26 in 2018 and 4 in 2019) met the probable AFM case definition. Sixty percent of confirmed and probable cases were younger than five years old, and all cases had symptom onset between the months of July and October. Enteroviruses were detected in 50% of confirmed cases. At the time of writing this report, 2020 AFM data were not yet available; it is unknown if a spike in AFM cases will be seen in 2020.

Spikes in acute flaccid myelitis (AFM), an emerging form of acute flaccid paralysis (AFP) related to viral infections and frequently described as “polio-like” illness, have been reported in the United States and elsewhere, in a seemingly biennial pattern in the summer and fall, in 2014, 2016 and 2018Footnote 1Footnote 2Footnote 3Footnote 4Footnote 5.

AFP is defined as a sudden onset of paralysis with reduced muscle tone in one or more limbs. This syndrome is caused by a range of etiologies, such as Guillain–Barré syndrome, transverse myelitis or neuropathies. These conditions are associated with neurotropic viruses, such as enteroviruses, including polio, Herpesviridae and parainfluenzavirusFootnote 6. AFM is a subtype of AFP associated with lesions in the grey matter of the spinal cord. It has been linked to viral infections, particularly enteroviruses EV-D68 and EV-A71, which can be spread via oral–fecal and respiratory routesFootnote 3Footnote 7Footnote 8.

AFM has been associated with disability and large healthcare requirements, mostly in childrenFootnote 9Footnote 10. The Centers for Disease Control and Prevention (CDC) has reported extensively on recent trends of AFM, in the United StatesFootnote 3Footnote 11. This emerging trend has led to concerns about the potential effect of AFM on Canadians. The seriousness of the condition as well as the lack of clear knowledge about the etiology of the disease underscore the need to better understand the epidemiology of AFM to further identify prevention and patient management measuresFootnote 3.

This study describes the preliminary analysis of AFM in Canada for the years 2018 and 2019, using data from the Canadian Acute Flaccid Paralysis Surveillance System (CAFPSS). Understanding seasonality trends of AFM can be helpful for public health and healthcare systems in their resource planning and messaging in preparation for a potential seasonal spike in 2020.

CAFPSS collects information on cases of AFP in children younger than 15 years old through reports from the Canadian Immunization Program Monitoring Active (IMPACT) and from the Canadian Paediatric Surveillance Program (CPSP). IMPACT is a network of 12 paediatric centres across Canada, representing 90% of paediatric tertiary care beds. CPSP collects information on rare paediatric conditions from a network of over 2,500 paediatricians across the countryFootnote 12Footnote 13. By monitoring for potential cases of polio presenting with AFP, CAFPSS is part of Canada’s ongoing efforts to maintain our polio elimination status. CAFPSS collects information on clinical presentation and investigations including laboratory results and magnetic resonance imaging (MRI) reports. All cases in the CAFPSS are adjudicated against the AFP case definition by a specially trained physician.

We extracted 2018 and 2019 AFP data from CAFPSS and aggregated these by year of paralysis/weakness onset. We then conducted descriptive analyses by year, age group, sex, AFM status (using the 2018 CDC case definition), outcome and virology results.

Since the implementation of CAFPSS in 1996, an average of 45 confirmed cases of AFP have been reported to the Public Health Agency of Canada (PHAC) annually, from 27 cases in 1996 and 2019 to 71 cases in 2018 (Figure 1). Between 2018 and 2019, PHAC received 120 reports of sudden onset muscle weakness in children younger than 15 years old. Of these reports, 98 were confirmed as AFP cases, eight did not meet the AFP case definition and were discarded, nine were duplicates and five remain under investigation, meaning that additional information has been requested to determine if they meet the AFP case definition.

Following the review of the 2018 and 2019 AFP confirmed cases using the 2018 CDC case definition, 10 cases were classified as confirmed AFM and 30 as probable AFM (Table 1). Of both confirmed and probable cases, 60% were younger than five years old. Boys accounted for slightly more than half of all AFM cases (Table 2).

Of the 18 cases for which AFM status could not be determined, 13 (72%) had viral testing results available. Of these, one case was positive for enterovirus type unspecified detected via a throat swab. The remaining cases were either positive for other viral agents (n=2) or had negative virology results (n=10).

The increase in AFP case reports in 2018 may be due, in part, to increased awareness of AFM among Canadian clinicians following the increase in number of AFM cases in the United States during that year.

Because the purpose of CAFPSS is to monitor for poliovirus in children, it is not an ideal surveillance tool for AFM. CAFPSS is limited to cases in children younger than 15 years old. As such, the trends described here are limited by data collection availability only for people younger than 15 years. Although cases of AFM have been reported in adults, the majority have been in young childrenFootnote 3. This suggests that CAFPSS can be expected to capture the majority of AFM cases. We anticipate that, although this limitation would reduce overall AFM case counts, it would not affect overall AFM trends.

MRI is essential for the confirmation of AFM. However, in this report, assessments were limited to the information provided to CAFPSS, which were often brief summaries of the MRI report. In other words, it was not possible to ascertain whether some cases met the case definition for AFM. CAFPSS did, however, allow for the use of an existing surveillance tool to monitor trends during periods when spikes in AFM activity have been reported elsewhere and to identify AFM activity related in part to non-polio enterovirus with a similar pattern in seasonality to reports coming out of the United States.

At the time of writing this report, 2020 AFM data were not yet available. The data will need to be analyzed in relation to recent historical trends. It is yet to be seen whether physical distancing and infection control practices in the community will reduce the burden of AFM by reducing community transmission of viruses other than coronavirus disease (COVID-19). The authors will continue to monitor reports of AFP and AFM in Canada and work with surveillance partners to ensure ongoing reporting.

In 2018, a record number of AFP cases was reported to CAFPSS, substantially higher than in 2019. A small proportion (10%) of the cases reported from 2018 and 2019 met the 2018 CDC case definition for confirmed AFM, with the majority having onset of paralysis in the late summer and early fall of 2018. This coincides temporally with the cyclical increase in AFM cases observed in the United StatesFootnote 3, suggesting that a similar trend might be occurring in Canada.

Enterovirus or rhinovirus/enterovirus was detected in non-cerebrospinal fluid specimens of half of the confirmed AFM cases, a greater proportion than seen in any of the other AFM categories. This is consistent with other reports of AFM being linked to enterovirus infectionsFootnote 3Footnote 7. No other viral infections were reported in confirmed AFM cases, whereas a variety of other viral infections were reported in each of the other AFM categories, suggesting that these cases might be linked to multiple viral etiologies.

The authors would like to thank F Reyes Domingo, M Roy and D MacDonald for their work on acute flaccid paralysis surveillance as well as Dr. J Ahmadian-Yazdi for his assistance with the preparation of this manuscript. The authors would also like to thank the Canadian Paediatric Surveillance Program and the Canadian Immunization Program Monitoring Active (IMPACT) surveillance program, particularly the IMPACT nurse monitors.