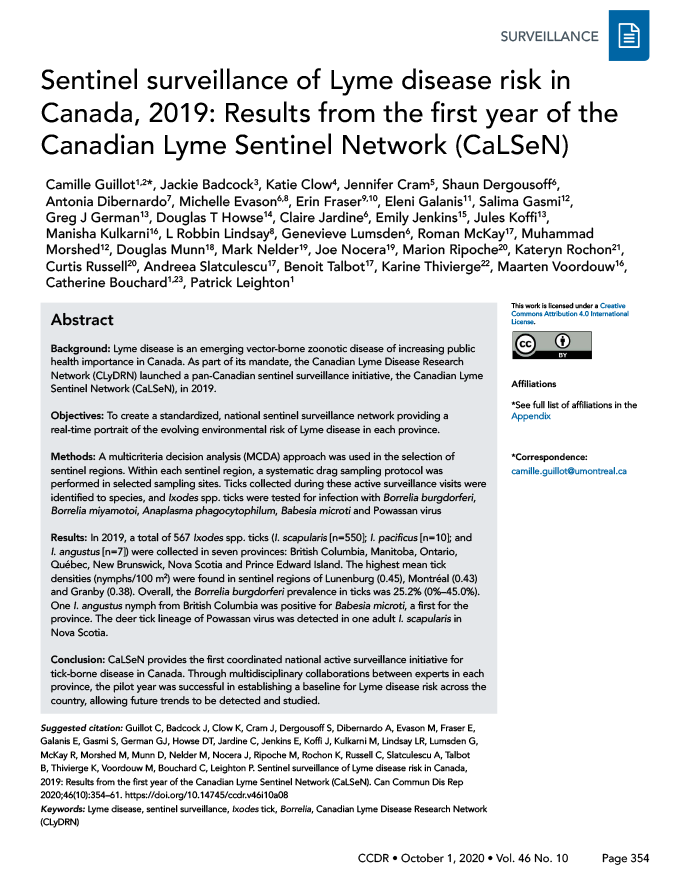 Sentinel surveillance of Lyme disease risk in Canada, 2019: Results from the first year of the Canadian Lyme Sentinel Network (CaLSeN)

Objectives: To create a standardized, national sentinel surveillance network providing a real-time portrait of the evolving environmental risk of Lyme disease in each province.

Methods: A multicriteria decision analysis (MCDA) approach was used in the selection of sentinel regions. Within each sentinel region, a systematic drag sampling protocol was performed in selected sampling sites. Ticks collected during these active surveillance visits were identified to species, and Ixodes spp. ticks were tested for infection with Borrelia burgdorferi, Borrelia miyamotoi, Anaplasma phagocytophilum, Babesia microti and Powassan virus.

Results: In 2019, a total of 567 Ixodes spp. ticks (I. scapularis [n=550]; I. pacificus [n=10]; and I. angustus [n=7]) were collected in seven provinces: British Columbia, Manitoba, Ontario, Québec, New Brunswick, Nova Scotia and Prince Edward Island. The highest mean tick densities (nymphs/100 m2) were found in sentinel regions of Lunenburg (0.45), Montréal (0.43) and Granby (0.38). Overall, the Borrelia burgdorferi prevalence in ticks was 25.2% (0%–45.0%). One I. angustus nymph from British Columbia was positive for Babesia microti, a first for the province. The deer tick lineage of Powassan virus was detected in one adult I. scapularis in Nova Scotia.

Conclusion: CaLSeN provides the first coordinated national active surveillance initiative for tick-borne disease in Canada. Through multidisciplinary collaborations between experts in each province, the pilot year was successful in establishing a baseline for Lyme disease risk across the country, allowing future trends to be detected and studied.

In Canada, Lyme disease is an emerging vector-borne zoonotic disease of increasing public health importanceFootnote 1. Lyme disease is caused by the bacterium Borrelia burgdorferi and is primarily transmitted to humans by the blacklegged tick (Ixodes scapularis) in central and eastern Canada and the western blacklegged tick (Ixodes pacificus) in British Columbia. Since Lyme disease became a nationally notifiable disease in 2009, the number of cases confirmed annually has risen from 144 to over 2,000 in 2017Footnote 2Footnote 3.

In response to the increasing risk of Lyme disease to the Canadian population and ongoing knowledge gaps, the Canadian Institutes of Health Research (CIHR) funded the creation of a national research network on Lyme diseaseFootnote 4. Launched in 2018, the Canadian Lyme Disease Research Network (CLyDRN) is a multidisciplinary initiative bringing together patients, physicians, social scientists, veterinarians and academic and government researchers with a patient-centred approach focused on improving the diagnosis, surveillance, prevention and treatment of Lyme disease in Canada. A key objective of the network is to better understand the risk of Lyme disease across the country and how this risk is evolving. Thus, one of the first actions of the network was to establish a pan-Canadian surveillance structure to collect comparable data about environmental risk across the country.

An important consideration in the planning of surveillance is that the risk of Lyme disease is not uniform across the countryFootnote 5. This is largely due to regional differences in tick species and environmentsFootnote 6Footnote 7Footnote 8Footnote 9 and the uneven pattern of ongoing range expansion of I. scapularis populations in CanadaFootnote 10. Regional differences in socioeconomic status of Canadians are also likely to influence how environmental risk affects regional incidence of Lyme disease casesFootnote 11.

While considerable effort has been invested in the measurement of Lyme disease risk for Canadians, surveillance remains heterogeneous across the country. Passive surveillance, the submission of ticks collected on humans or animals, provides valuable information on riskFootnote 12Footnote 13, but cannot be maintained uniformly across the country due to resource limitations. Active surveillance, the collection of ticks from the environment by drag sampling or rodent capture, is resource-intensive and is carried out in each province according to region-specific objectives, sampling protocols and funding availability.

Here we report the first results from the Canadian Lyme Sentinel Network (CaLSeN), a new pan-Canadian LD surveillance network launched by CLyDRN in 2019. In this pilot year, we carried out standardized active surveillance of ticks in the environment across Canada using a sentinel surveillance approach. Sentinel surveillance has the advantage of concentrating surveillance effort in selected sentinel regions, providing a comparable measure of environmental risk for Lyme disease and other tick-borne diseases across the country and in-depth risk information that is complementary to ongoing federal and provincial surveillance activities.

With surveillance carried out annually in sentinel regions in each Canadian province, the objectives of CaLSeN aim to: 1) provide the first standardized, national, real-time portrait of evolving environmental Lyme disease risk in Canada and 2) support research on regional variation in risk and its determinants.

Selection criteria included evidence of the emergence of Lyme disease based on existing passive surveillance data (number of Ixodes tick submissions/100,000 people)Footnote 10; human population covered by the network; and logistical criteria associated with field sampling and suitability of the environment for Ixodes ticks, such as presence of deciduous or mixed forests. Sentinel regions were not established in Yukon, the Northwest Territories, Nunavut or the mainland portion of Newfoundland and Labrador because current environmental conditions at these latitudes are not suitable for Ixodes spp. ticks to establishFootnote 15.

Ticks were collected in each sentinel region using a standardized drag sampling protocolFootnote 16Footnote 17. This involved dragging a 1 m × 1 m piece of white flannel cloth over 2,000 m2 of ground vegetation in linear transects, stopping every 25 m to collect questing ticks that had clung to the passing cloth. Multiple sampling sites were selected in each sentinel region. Locations were chosen because they had suitable tick habitats. Surveillance efforts were increased in known Lyme disease–endemic areas to obtain fine-scale information on the distribution of risk within these areas (Table 1). Each site was sampled once during the summer (May–August 2019), targeting the regional peak in activity of nymphal Ixodes spp. ticks, the stage of greatest public health significanceFootnote 18Footnote 19Footnote 20. In addition to collecting ticks, we collected data on leaf litter depth, canopy cover and soil humidity at each sampling location and noted ambient temperature and weather conditions during collection to account for the possible effects of these variables on tick collection.

The species of all ticks collected by drag sampling were identified, but only I. scapularis (n=550), I. pacificus (n=10) and I. angustus (n=7) were tested for the presence of pathogens as they are known vectors for B. burgdorferi and other pathogens. Individual ticks were tested for the presence of Anaplasma phagocytophilum, Babesia microti, B. burgdorferi, Borrelia miyamotoi and Powassan virus by real-time polymerase chain reaction (PCR) or reverse transcriptase-PCR with slight modifications to previously described methodsFootnote 21. Briefly, nucleic acids were extracted from ticks using QIAGEN RNeasy 96 kits (QIAGEN Inc., Mississauga, Ontario, Canada). The extracts contained both RNA and DNA, and were screened for all the pathogens listed above. Modifications to testing algorithms included the use of an in-house triplex screening assay targeting the 18S rRNA gene of Babesia species, followed by the B. microti-specific CCT-eta real-time assay for confirmation, as well as a duplex assayFootnote 22 to confirm the presence of B. burgdorferi and/or B. miyamotoi.

In its pilot year, the Canadian Lyme Sentinel Network documented the presence of Ixodes tick species that are vectors of B. burgdorferi and four other human pathogens in seven out of 10 Canadian provinces, with an overall infection prevalence of 25.2% (0%–45.0%) for B. burgdorferi. However, we noted a great variability between regions: while no Borrelia were found in British Columbia, Prince Edward Island or Manitoba, infection prevalence in sentinel regions in Ontario, Québec, New Brunswick and Nova Scotia ranged between 19.0% and 45.0%. These results align with the results of recent studies of the distribution of I. scapularis ticks in CanadaFootnote 24Footnote 25Footnote 26Footnote 27, suggesting that the sentinel approach adopted by CaLSeN is successfully capturing regional variations in Lyme disease risk.

Surveillance results highlighted notable regional variation in density of I. scapularis within Ontario and Québec. Mean density of nymphs in the Granby and Montréal regions of Québec were 0.38 and 0.43 ticks per 100 m2, respectively, whereas no blacklegged ticks were found in Sherbrooke. In Ontario, nymph densities were high in Kingston (0.27 nymphs/100 m2), but much lower in southern Ontario, with only 0.02 nymphs/100 m2 in Hamilton. Nymph densities from Ottawa should be interpreted with caution, as sampling was undertaken earlier in the summer, prior to the summer peak in nymph activity.

The 2019 surveillance by CaLSeN represents the first effort to detect locally reproducing populations of I. scapularis ticks through active surveillance in both Prince Edward Island and the island of Newfoundland. Thus, the presence of I. scapularis confirmed by drag sampling in Prince Edward Island was a novel finding. The detection of two different stages (nymph and adult) in the environment at two separate sampling sites is early evidence that local reproduction of ticks may be occurring. However, it is possible that the two specimens were adventitious ticks carried to the island by migrating birds. Further active surveillance will be necessary to confirm whether ticks are established in the province.

Laboratory analyses of collected ticks yielded two noteworthy pathogen detections. Firstly, B. microti was detected in an I. angustus nymph, the first report of a tick infected with this pathogen in British Columbia. Secondly, the deer tick lineage of Powassan virus was detected in the Lunenburg sentinel region and this is only the second detection of this pathogen in questing ticks in the regionFootnote 28.

A major strength of our surveillance network is the collaboration established between provinces and between public health authorities and academics. These links have allowed knowledge translation between the involved parties and have been crucial during the planning phases of the network. Partnership was essential during the selection of sentinel regions and in carrying out the fieldwork. To strengthen these collaborations, CaLSeN will continue to work closely with provincial health authorities to ensure that the activities of the network are complementary to and coordinated with provincial surveillance objectives.

An important limitation to the interpretation of results is the variable timing of the sampling in each region. This may have contributed to differences in the abundance of the tick stages collected, as adults are generally active earlier in the spring whereas nymphal abundance peaks slightly later in the summerFootnote 29. The absolute values of reported tick densities therefore need to be interpreted with caution.

The inclusion of variables such as temperature and weather during the sampling event in further statistical analyses carried out on gathered data will also be important to control for variability in timing of tick sampling. Finally, pursuing yearly sampling within a time-frame more closely aligned with the peak in nymphal activity will provide better data for documenting change in regional risk over time.

The Canadian Lyme Sentinel Network provides the first coordinated national active surveillance initiative for tick-borne disease in Canada. To our knowledge, the sentinel surveillance approach has not been applied to Lyme disease on the national scale elsewhere in North America or Europe, making CaLSeN a useful model for other countries affected by Lyme disease and other tick-borne illnesses. Following the establishment of baseline data on Lyme disease vectors and prevalence of Borrelia, an important next step will be to establish the link between the environmental risk and the regional incidence of human cases. Further collection of environmental, social and human case data across sentinel regions will allow for the exploration of the broader representativity of sentinel-based risk measures for tick-borne disease surveillance.

We thank the many field and laboratory technicians who were involved in tick collection and testing. We gratefully acknowledge the support of regional and provincial health authorities in facilitating site selection, and regional and national parks for providing access to field sites.