An increase of cryptosporidiosis reported in Ontario, 2018 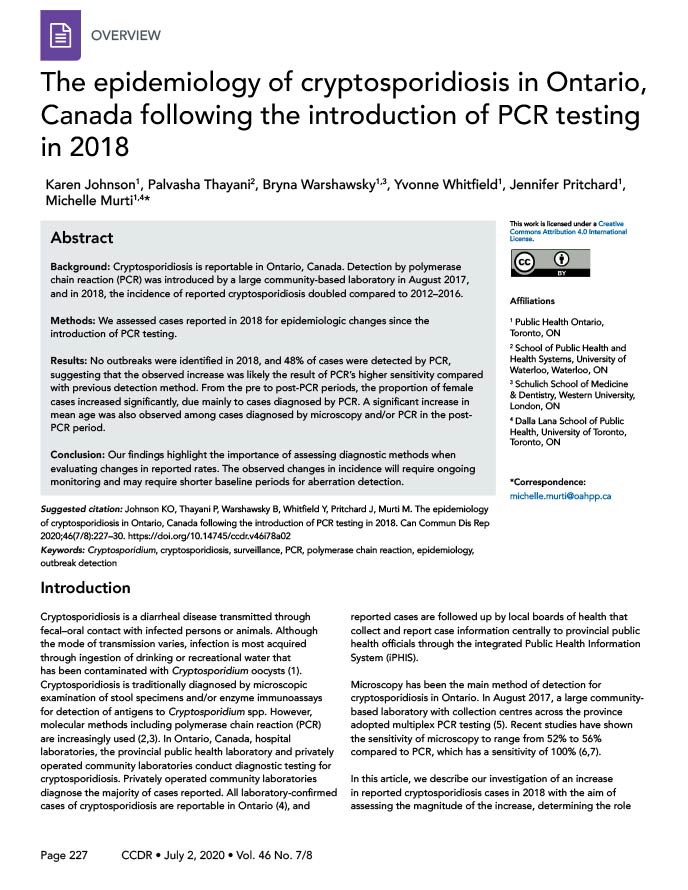 The epidemiology of cryptosporidiosis in Ontario, Canada following the introduction of PCR testing in 2018

Background: Cryptosporidiosis is reportable in Ontario, Canada. Detection by polymerase chain reaction (PCR) was introduced by a large community-based laboratory in August 2017, and in 2018, the incidence of reported cryptosporidiosis doubled compared to 2012–2016.

Methods: We assessed cases reported in 2018 for epidemiologic changes since the introduction of PCR testing.

Results: No outbreaks were identified in 2018, and 48% of cases were detected by PCR, suggesting that the observed increase was likely the result of PCR’s higher sensitivity compared with previous detection method. From the pre to post-PCR periods, the proportion of female cases increased significantly, due mainly to cases diagnosed by PCR. A significant increase in mean age was also observed among cases diagnosed by microscopy and/or PCR in the post-PCR period.

Conclusion: Our findings highlight the importance of assessing diagnostic methods when evaluating changes in reported rates. The observed changes in incidence will require ongoing monitoring and may require shorter baseline periods for aberration detection.

Cryptosporidiosis is a diarrheal disease transmitted through fecal–oral contact with infected persons or animals. Although the mode of transmission varies, infection is most acquired through ingestion of drinking or recreational water that has been contaminated with Cryptosporidium oocystsFootnote 1. Cryptosporidiosis is traditionally diagnosed by microscopic examination of stool specimens and/or enzyme immunoassays for detection of antigens to Cryptosporidium spp. However, molecular methods including polymerase chain reaction (PCR) are increasingly usedFootnote 2Footnote 3. In Ontario, Canada, hospital laboratories, the provincial public health laboratory and privately operated community laboratories conduct diagnostic testing for cryptosporidiosis. Privately operated community laboratories diagnose the majority of cases reported. All laboratory-confirmed cases of cryptosporidiosis are reportable in OntarioFootnote 4, and reported cases are followed up by local boards of health that collect and report case information centrally to provincial public health officials through the integrated Public Health Information System (iPHIS).

Microscopy has been the main method of detection for cryptosporidiosis in Ontario. In August 2017, a large community-based laboratory with collection centres across the province adopted multiplex PCR testingFootnote 5. Recent studies have shown the sensitivity of microscopy to range from 52% to 56% compared to PCR, which has a sensitivity of 100%Footnote 6Footnote 7.

We conducted this assessment by comparing demographic, risk factor and outcome data from iPHIS for 2018 (the first full year following implementation of PCR testing) with the pre-PCR period of 2012–2016.

We extracted information on age, sex, outcome (hospitalization or death), reported symptoms, reporting laboratory (i.e. community based, hospital or public health) and method of diagnosis [i.e. PCR, microscopy, enzyme immunoassay (EIA) and culture-bacterial] from iPHIS for cryptosporidiosis cases with episode dates from January 1, 2012 to December 31, 2016 (pre-PCR) and from January 1 to December 31, 2018 (post-PCR).

Cases with no diagnostic data, cases diagnosed by PCR in the pre-PCR period and cases that had “culture-bacterial” (which reflect data entry errors) as the method of detection were excluded from all analyses except for overall case counts and rates. Social or behavioural risk factors, including history of travel outside the province, foodborne and waterborne exposures, and animal and person-to-person contact, for cases with episode dates in 2018, were also analyzed to determine whether there were any previously unrecognized outbreaks. All analyses were performed using the statistical package SAS Enterprise Guide version 7.1 (p<0.05 considered statistically significant).

Based on the assessed risk factors, no commonalities were reported at the provincial level that suggested the occurrence of any outbreaks among non-travel cases in 2018, or within the health units that had identified localized increases above their usual summer peak in incidence.

Our investigation identified a two-fold increase in the incidence of cryptosporidiosis cases in 2018, the first full year after the introduction of PCR testing in August 2017, compared to the pre-PCR period of 2012–2016. However, it remains unclear why the number of cases reported in 2017 decreased despite the introduction of PCR in that year and a gradually increasing trend in the previous five years. As only positive laboratory results are reportable in Ontario, we were not able to assess if the increase in 2018 was due to an increase in the number of cases, an increase in the number of tests ordered or an increase in positivity owing to PCR’s higher sensitivity compared with previous detection method. Our investigation of the increase in 2018 also did not identify any common social and behavioural risk factors among domestic cases that were indicative of an outbreak. During the period of increase, clinical indications for testing and surveillance criteria for defining and reporting cases did not change, nor did healthcare providers have the option to specify their preferred diagnostic method (e.g. microscopy, EIA or PCR) when ordering tests. Given these factors, it is possible that the increase in 2018 resulted, at least partially, from PCR’s higher sensitivity, which resulted in the detection of cases that would have otherwise remained undiagnosed by microscopy or EIA.

With the increase in the reported rate of cryptosporidiosis, there was also an increase in the proportion of female cases in 2018, driven by PCR diagnoses. One possible hypothesis is that the baseline test positivity rate for females was lower compared to males and subsequently more affected by the higher sensitivity of PCR testing. In contrast, the increase in mean age among cases diagnosed by both PCR and microscopy in 2018 may reflect an underlying shift in the age distribution of persons tested in 2018 compared to 2012–2016. We would require data on the age and sex of persons that submitted specimens for testing, testing volumes and positivity rates to fully assess these changes in the demographics of cryptosporidiosis cases.

The shift towards fewer hospitalized and more asymptomatic cases after the introduction of PCR testing reflects PCR’s higher sensitivity and use in community laboratories that test non-hospitalized patients. Similar trends among microscopy-detected cases were also observed, suggesting that factors other than the introduction of PCR testing may have influenced the shifts in hospital and symptom status in 2018. However, given the small proportions of cases overall that were hospitalized or asymptomatic, caution must be exercised in drawing conclusions from these limited post-PCR data.

Our investigation demonstrated that the traditional approach to examining incidence over time for trends and outbreak detection must be coupled with a review of other data elements such as diagnostic methods and risk factor information, which can indicate whether increases are artifacts, due to increases in sporadic cases or attributable to a specific source. We anticipate that the adoption of PCR testing for diagnosing cryptosporidiosis will occur at different times by the various diagnostic laboratories in Ontario, resulting in staggered increases in incidence. These changes will require continuous reassessment of baseline values for accurate interpretation of trends for aberration detection and timely outbreak detection. With time, we expect the emergence of a more stable and long-standing baseline at a higher incidence rate due to the more widespread use of PCR. As our investigation reflects one year of PCR testing, analysis of additional years of data is required to understand the clinical and public health relevance of cases detected by this method.