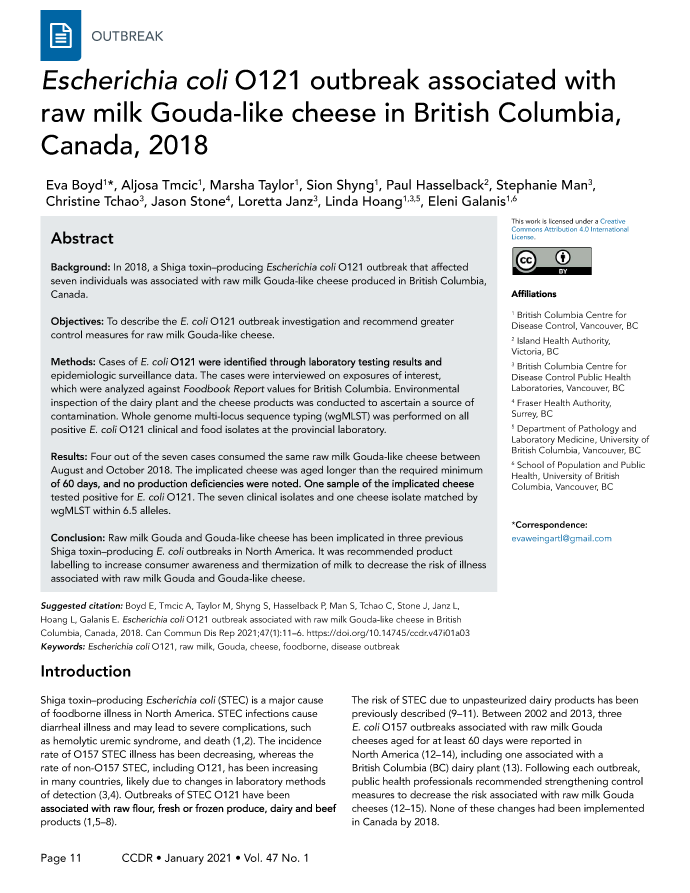 Methods: Cases of E. coli O121 were identified through laboratory testing results and epidemiologic surveillance data. The cases were interviewed on exposures of interest, which were analyzed against Foodbook Report values for British Columbia. Environmental inspection of the dairy plant and the cheese products was conducted to ascertain a source of contamination. Whole genome multi-locus sequence typing (wgMLST) was performed on all positive E. coli O121 clinical and food isolates at the provincial laboratory.

Results: Four out of the seven cases consumed the same raw milk Gouda-like cheese between August and October 2018. The implicated cheese was aged longer than the required minimum of 60 days, and no production deficiencies were noted. One sample of the implicated cheese tested positive for E. coli O121. The seven clinical isolates and one cheese isolate matched by wgMLST within 6.5 alleles.

Shiga toxin-producing Escherichia coli (STEC) is a major cause of foodborne illness in North America. STEC infections cause diarrheal illness and may lead to severe complications, such as hemolytic uremic syndrome, and death Footnote 1 Footnote 2. The incidence rate of O157 STEC illness has been decreasing, whereas the rate of non-O157 STEC, including O121, has been increasing in many countries, likely due to changes in laboratory methods of detection Footnote 3 Footnote 4. Outbreaks of STECO121 have been associated with raw flour, fresh or frozen produce, dairy and beef products Footnote 1 Footnote 5 Footnote 6 Footnote 7 Footnote 8.

In November 2018, another STEC outbreak associated with a raw milk Gouda-like cheese occurred in BC (population: 5.1 million).

The objective of this article is to describe the outbreak investigation and findings and reiterate the need for greater control measures related to raw milk Gouda-like cheese.

A confirmed case was defined as a person infected with E. coli O121 between August 1, 2018, and November 30, 2018, visiting or residing in BC, with an isolate matching within 10 alleles by whole genome multi-locus sequence typing (wgMLST). A single interviewer used an outbreak questionnaire focusing on dairy, meat and farm exposures to re-interview cases.

We compared case exposures to those of the BC population using Foodbook Report values Footnote 18. Binomial probability was used to calculate the risk of exposure by comparing the observed proportion of cases exposed in the outbreak to the expected proportion of individuals exposed in the BC population. A p<0.05 was used to denote statistical significance. Case purchase data were collected using grocery store consumer cards and shopping receipts and reviewed to identify similar products as well as purchase dates and brands. Samples of leftover products were collected from case homes and grocery stores. All case data and exposure information were analyzed using Microsoft Excel.

Investigators inspected the dairy plant that was the source of the outbreak ("dairy plant A"), reviewed records related to cheese production and distribution, collected samples and, in collaboration with local health inspectors, investigated potential sources of contamination and any deficiencies in the manufacturing process. They also determined the product distribution pathways for the implicated cheese.

The BC Ministry of Agriculture supplied information about the condition of the cow herd and results of routine raw milk testing including non-hemolytic E. coli, total bacterial count and somatic cell count using standard automatic testing methods. Cheese testing by dairy plant A was conducted under a mandatory finished product testing program.

Local BC laboratories with positive molecular assays for stx genes submit all the positive samples to the BC Centre for Disease Control (BCCDC) Public Health Laboratory. Other frontline laboratories submit E. coli O157 isolates, bloody stools and/or stools from patients with hemolytic uremic syndrome, according to provincial guidelines, to the Public Health Laboratory for stx1 and stx2 gene detection and culture Footnote 19. All STEC received at, or recovered by, the Public Health Laboratory are routinely serotyped using a gene detection polymerase chain reaction (PCR) targeting the most common serotypes in BC: O26, O45, O111, O103, O121 and O145.

The Public Health Laboratory tested food samples and environmental swabs using an adaptation of published Health Canada Compendium of Analytical Methods for E. coli O157:H7 Footnote 20. The molecular detection of stx1 and stx2 genes and O-typing was performed in enrichment broth. Positive detection in enrichment broths necessitated subsequent culture isolation. These isolates were then serotyped as described above.

All STEC isolates underwent wgMLST. The wgMLST schema for E. coli compared 17,380 loci in the E. coli genome according to standardized procedures used by PulseNet Canada Footnote 21. The PulseNet criterion of isolates with 10 or less allele differences was used to define a wgMLST genomic cluster.

There were seven confirmed cases. The onset dates ranged from August 19 to November 9, 2018 (Figure 1). Six cases resided in Health Region 1 and one in Health Region 2. The median age was 28 years (range: 22–64 years). Five were female. There were no hospitalizations and no deaths were reported.

Based on initial case interviews, all seven cases reported consuming cheese. No secondary interview information was available for one case. Secondary interviews (conducted with six cases) as well as purchase data (available for two cases) identified five cases who consumed a "spicy" or "spiced" cheese from dairy plant A, and one case who ate cheese but did not recall eating cheese from dairy plant A. Four cases confirmed consuming cheese A, a raw milk Gouda-like cheese with added spices that was produced at dairy plant A in Health Region 1. One of the four cases visited dairy plant A in August to September, where they sampled cheese A, and the other three purchased cheese A from three different grocery stores between September and October.

Dairy plant A was a farmstead operation with approximately 45 dairy cows that supplied all the milk for the plant's cheese production. Cheese A was a raw milk washed curd cheese made following a process similar to that used to make Gouda cheese. The curd, obtained after coagulation and cutting, was washed in a mixture of whey and hot water and mixed with a blend of spices that had been boiled in water. Blocks of cheese curd were vacuum-sealed in bags and aged for at least three months. After aging, cheese blocks were cut and packaged onsite for distribution and sale at farmers' markets, grocery stores, restaurants and at the farmgate store.

Routine testing of the farm's raw milk by the Ministry of Agriculture between May and November 2018 found low total bacterial counts, low somatic cell counts and absence of non-hemolytic E. coli. Dairy plant A's product testing of cheese A was in compliance, testing below the detection limit for E. coli. Review of the inspection records revealed no major deficiencies.

Lot traceability from dairy plant A to the distributor and direct accounts was maintained, but lot traceability from the distributor to retail accounts was not maintained. The best-before date on the retail sample package of cheese A that tested positive allowed inspectors to identify the production date as March 31, 2018. This batch was cut on August 1, 7 and 8, 2018. Apart from some pieces that were served onsite to visitors, a single distributor received the entire batch on August 8 and 14, 2018, and distributed it to retail locations throughout BC.

The Public Health Laboratory tested 41 cheese samples from 24 batches between April 27, 2018, and November 2, 2018, as well as three spice samples, one meat sample and 11 environmental samples from dairy plant A. Thirty-eight cheese samples were collected from dairy plant A, one sample of cheese A was collected from a retailer in Health Region 2, and two unopened packages of different dairy plant A cheeses were collected from a case's home. One cheese sample tested positive for stx2and two for stx1 (Table 1). The stx2-positive sample grew E. coli O121, whereas the two stx1 samples were unable to grow. All other samples, including the environmental swabs, tested negative.

Epidemiologic, laboratory and food safety investigations confirmed raw milk Gouda-like cheese to be the source of this outbreak. All seven outbreak cases reported consuming cheese, with five reporting consuming cheese from the same BC dairy plant and four reporting consuming the same cheese product. A sample of this cheese product tested positive for the same strain of E. coli O121 as the cases. A single batch of this cheese could explain all the illnesses; cheese from this batch was the only one that tested positive for the outbreak strain among the 16 tested and the implicated batch was available to all cases for consumption. All other cheese products and environment swabs tested negative for STEC. Furthermore, the specific cheese product contained no pasteurization and no kill step for the raw protein, which is a known vehicle for transmission of pathogens. Therefore, contaminated raw milk is believed to be the source of cheese contamination. Cattle are the primary reservoir of STEC, and infected cows are asymptomatic and shed sporadicallyFootnote 22 Footnote 23.

Dairy plant A was compliant with current Canadian regulatory requirements and aged its raw milk Gouda-like cheese for over 60 days Footnote 25. Nevertheless, three separate batches were found to be contaminated with STEC.

This is the third reported STEC outbreak caused by raw milk Gouda or Gouda-like cheese aged longer than the 60-day minimum Footnote 13 Footnote 14 Footnote 26. Several studies have shown that 60 days of aging is insufficient to inactivate pathogenic bacteria in Gouda cheese Footnote 12 Footnote 15 Footnote 17 Footnote 27. Gouda and Gouda-like cheese production involves a curd-washing step to reduce the amount of lactose in the cheese curds. The combined effects from the addition of hot water to the curds dilutes out the lactose in the whey, shrinks the curds to expel moisture and creates an osmotic gradient across the curd membrane to draw out lactose while reabsorbing water. This new state decreases the formation of lactic acid, thus increasing the pH and moisture of the curd. Higher pH and moisture increase the risk of survival and growth of microbial contaminants Footnote 28.

This outbreak provides further evidence of the inherent risk of raw milk Gouda and Gouda-like cheeses. This is the fourth call to strengthen the regulatory requirements for such cheeses. At a minimum, we recommend enhancing milk and cheese-processing controls and increasing consumer awareness. As a result of this outbreak, we recommend the thermization of raw milk prior to production of Gouda and Gouda-like cheeses to decrease the risk of microbial contamination yet retain the appeal of unpasteurized milk cheese. Thermization of raw milk at 64.4°C for 17.5 seconds can achieve at least a five-log reduction of E. coli O157:H7 Footnote 29 Footnote 30 Footnote 31. We also recommend mandatory product labelling to indicate whether raw, unpasteurized or pasteurized milk is used to increase consumer awareness and support informed decision-making. Dairy plant A now uses pasteurized milk, discontinued the curd-washing step and standardized the heating step to prepare the spice mixes, leading to a lower-risk cheese.

There are several limitations in this investigation. Neither the health of the cows on the farmstead nor the quality of the milk were examined during the outbreak. Therefore, it was not confirm whether E. coli O121 stx2 was present in the herd at the time of the outbreak. In addition, the traceability of the cheese from the manufacturer to retailers was limited by poor records. Lastly, no raw Gouda or Gouda-like cheese exposure data were available for the healthy population controls to allow a direct comparison to outbreak cases.

This outbreak provides further evidence that raw milk Gouda and Gouda-like cheese processed according to regulations in North America is at risk of containing STEC, which contributes to foodborne illness. It is recommended implementing additional control measures for raw milk Gouda and Gouda-like cheese production to minimize the risk to the public.

The authors wish to acknowledge the contributions of local laboratories in British Columbia (BC), local health authority Environmental Health Officers and Medical Health Officers, and Dr. J Pritchard, Chief Veterinary Officer of BC.

The authors do not have any funding to declare.

The content and view expressed in this article are those of the authors and do not necessarily reflect those of the Government of Canada.