Summary of a Foodbook Study that included Northern Canada, 2014–2015 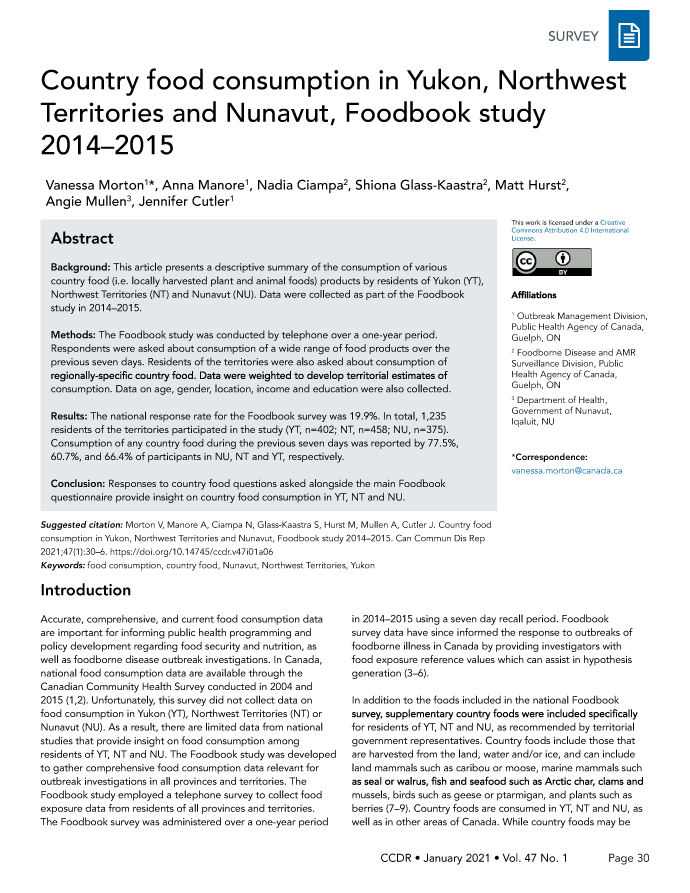 Background: This article presents a descriptive summary of the consumption of various country food (i.e. locally harvested plant and animal foods) products by residents of Yukon (YT), Northwest Territories (NT) and Nunavut (NU). Data were collected as part of the Foodbook study in 2014–2015.

Methods: The Foodbook study was conducted by telephone over a one-year period. Respondents were asked about consumption of a wide range of food products over the previous seven days. Residents of the territories were also asked about consumption of regionally-specific country food. Data were weighted to develop territorial estimates of consumption. Data on age, gender, location, income and education were also collected.

Accurate, comprehensive, and current food consumption data are important for informing public health programming and policy development regarding food security and nutrition, as well as foodborne disease outbreak investigations. In Canada, national food consumption data are available through the Canadian Community Health Survey conducted in 2004 and 2015 Footnote 1 Footnote 2. Unfortunately, this survey did not collect data on food consumption in Yukon (YT), Northwest Territories (NT) or Nunavut (NU). As a result, there are limited data from national studies that provide insight on food consumption among residents of YT, NT and NU. The Foodbook study was developed to gather comprehensive food consumption data relevant for outbreak investigations in all provinces and territories. The Foodbook study employed a telephone survey to collect food exposure data from residents of all provinces and territories. The Foodbook survey was administered over a one-year period in 2014–2015 using a seven day recall period. Foodbook survey data have since informed the response to outbreaks of foodborne illness in Canada by providing investigators with food exposure reference values which can assist in hypothesis generation Footnote 3 Footnote 4 Footnote 5 Footnote 6.

In addition to the foods included in the national Foodbook survey, supplementary country foods were included specifically for residents of YT, NT and NU, as recommended by territorial government representatives. Country foods include those that are harvested from the land, water and/or ice, and can include land mammals such as caribou or moose, marine mammals such as seal or walrus, fish and seafood such as Arctic char, clams and mussels, birds such as geese or ptarmigan, and plants such as berries Footnote 7 Footnote 8 Footnote 9. Country foods are consumed in YT, NT and NU, as well as in other areas of Canada. While country foods may be consumed by individuals of diverse cultural backgrounds, the harvesting, preparation, sharing and consumption of country foods support connections to cultural heritage for Indigenous peoples Footnote 10. In addition to supporting connections to cultural heritage, country foods are often perceived as tastier, more nutritious and less expensive than store-bought foods Footnote 7 Footnote 11 Footnote 12. Country foods can be obtained by hunting or gathering, sharing among community, family or friends, from local hunters' and trappers' organizations, or from businesses that or individuals who sell country food Footnote 7 Footnote 11 Footnote 12 Footnote 13.

As with data from the national Foodbook study, country food consumption data were collected with the aim of quantifying the prevalence of consumption of country foods, information that was not available from previous national surveys. In the event of an outbreak of foodborne illness in YT, NT or NU, these data on country food consumption frequencies may assist investigators in evaluating specific country foods as potential food exposures of interest. These data are also potentially useful for work on nutrition, food security, other health research, as well as policy development.

Data on country food consumption were collected as part of the larger national Foodbook study. Foodbook was a population-based telephone survey conducted in all Canadian provinces and territories, from April 2014 to April 2015 with monthly quotas to ensure representativeness over the different seasons. Foodbook interviews were administered in English and French in all provinces and territories, and English, French and Inuktitut in Nunavut. Proxy respondent were used for individual under the age of consent or for individuals with medical or activity limitations. On-demand verbal translation was available for other languages as needed. The study design and sampling methodology for the Foodbook study are described in detail in the published report Footnote 14. Briefly, a landline telephone and cell phone sampling frame were used to select respondents from each territory. In addition to demographic questions (e.g. education level, household income, forward sortation area), participants were asked if they consumed various specific food items during the previous seven days. Food consumption questions included items within the categories of fruits, vegetables, herbs and spices, nuts, meats, fish and shellfish, eggs, dairy products and country foods. A copy of the questionnaire is available through Open Data Footnote 15. Questions related to country food consumption were asked only of participants in YT, NT and NU. Country food questions were drafted and reviewed with territorial government representatives to ensure that the included country food items were reflective of animal and plant species available and/or consumed in each territory.

The Foodbook study was reviewed and approved by the Health Canada and the Public Health Agency of Canada's Research Ethics Board (REB 2013-0025) and the Newfoundland and Labrador Health Research Ethics Authority (HREB 13.238).

Data were cleaned, coded and analysed using Stata 15.1 for Windows (StataCorp LP, College Station, Texas, United States). Missing values, such as respondents declining to answer a question, were removed from the analysis for those specific questions. Proportions were calculated using survey weights, the details of which are described in the Foodbook Report Footnote 14.

Composite variables describing categories of foods were created based on biological categorization and consultation with territorial government representatives. These composite variables included any country foods, large game, small game, wild poultry, marine mammals, fish, wild eggs and plants. Composite variables were coded as "yes" if the individual reported consuming at least one of the items and "no" if the respondent did not report consuming any of the items.

An adjusted Wald's test was used to assess significant differences in the composite variable "any country food" between categories of demographic variables (i.e. age, education, income and location). The categories reporting the highest proportion of country food consumption served as referent groups. Comparisons with p<0.05 were considered statistically significant.

Consumption of one or more country foods during the previous seven days was reported by 66.4% Foodbook participants in YT, 60.7% in NT and 77.5% in NU (Table 2). Foodbook respondents aged 0–9 years in YT and NT were less likely to report eating any country food in the previous seven days compared with those aged 20–64 years. No other statistically significant differences were noted between age categories (Table 2). The proportion of Foodbook respondents reporting any country food consumption with a household income of less than $30,000 was significantly higher than the proportion among respondents with a household income of greater than $80,000 in all three territories.


There were no significant differences in the composite variable "any country food" reported among categories of the education variable in YT and NT. In contrast, in NU, the prevalence of country food consumption was significantly higher among respondents with "less than high school diploma" and those with a "trade, college or non-university certificate/diploma" when compared with respondents with a "Bachelor's degree or a degree above the Bachelor's level". The proportion of respondents consuming any country food was significantly higher in areas of YT and NT that are outside of the capital regions of Whitehorse and Yellowknife (Table 2).

The Foodbook study captured data on food consumption, including country food, among residents of YT, NT and NU. This information fills a gap in national food consumption data. In total, over 60% of Foodbook respondents in each territory reported consuming one or more country foods in the previous seven days. These data show that country foods comprise a part of the diet for the majority of YT, NT and NU residents. The data reported here, and other data collected through the Foodbook surveys, may be used to fill gaps in knowledge for those pursuing research in the areas of food safety, food security, climate change or nutrition.

Given the diversity of climate, landscape, populations and cultural practices across the three territories, it is difficult to make meaningful comparisons between the territories regarding the types of country food reported. However, some general trends were observed regarding which residents were reporting consuming county foods. In all three territories, the percentage of Foodbook survey respondents consuming country foods increased with age, with the exception of individuals between 20 and 64 years of age in Nunavut. This association between country food and age aligns with the finding of surveys of indigenous populationsFootnote 16 Footnote 17. There also appeared to be a link between income and country food consumption. The reasons for this link are unclear but the cost of store-bought foods in some remote communities is quite high so participants with lower annual incomes may be supplementing expensive store-bought food with inexpensive country food. Conversely, other studies have noted that costs associated with hunting can be a barrier to consumption of country foodsFootnote 7.

Several studies have investigated the frequency and amount of country food consumption in specific region and communities in YT, NT and NU (Table 4). While there are some commonalities between the methods employed in these studies and in the Foodbook study, key differences include the recall periods and method of survey administration. These previous studies also differ from the Foodbook study by target population. The studies included in Table 4 focused on specific Indigenous communities. In contrast, the Foodbook study collected data for the whole territorial population, regardless of ethnicity. These methodological differences make it challenging to compare results between studies. Rather, these studies, taken together, may be seen as complementary, and increase understanding of country food consumption among residents of YT, NT and NU.


The main limitations of the Foodbook study are listed in the Foodbook report Footnote 14. One of the specific limitations in the territories was that the survey was administered solely by telephone. This likely affected the representativeness of the study respondents: while 99% of Canadian households have telephone access, in the territories the number of households with telephone access is likely to be lower than southern Canada Footnote 22. Another key limitation was the lack of ethnicity data. These data would have provided information on the number of Indigenous people included in the survey and would help to understand links between ethnicity and food consumption habits.

Overall, the 2014–2015 Foodbook study provided a comprehensive picture of food consumption in Canada and included the territories, which had not been included in previous national studies. It is also important to note that Foodbook study is one of the few national surveys to provide the option to be completed in Inuktitut, which may have resulted in the survey reaching a segment of the population that would not be represented otherwise. Data presented here can provide information to support nutrition, food security, outbreak investigations and other research projects. The addition of country foods to other food consumption studies should be considered in other geographical areas, especially rural and remote areas, to understand the role of country foods in the diet of Canadians.

V Morton and J Cutler conceived the idea for this manuscript. V Morton and A Manore developed the first draft. All authors contributed to the development and revision of this manuscript and approved the final draft for submission.

A Mullen is currently associated with Nova Scotia Department of Health and Wellness.

The authors acknowledge the Centre for Foodborne, Environmental and Zoonotic Infectious Diseases (Public Health Agency of Canada), Outbreak Management Division and Food-Borne Disease and Antimicrobial Resistance Surveillance Division, provincial and territorial epidemiologists for their assistance with the Foodbook project; the staff at R.A. Malatest & Associates Ltd. for their expert interviewing. We also thank J Allen from Nunavut Tunngavik Incorporated for reviewing the manuscript.

This work is supported by the Public Health Agency of Canada.