Northern residents have told the Canada Revenue Agency (CRA) that they experience difficulty determining the lowest return airfare for claiming the travel benefits portion of the northern residents deductions. Determining the lowest return airfare ordinarily available at the time a trip is made is currently a required element for claiming the travel benefits deduction.

The CRA recently consulted on the proposed regulatory amendment referred to below. The consultation closed on April 17, 2019. Thank you to all those who provided feedback. We are currently considering the input received.

What are the northern residents deductions

Section 110.7 of the Income Tax Act provides tax relief to eligible individuals who live in a prescribed northern or intermediate zone. To be eligible for a particular year, the individual must have lived in one or more prescribed zones for a continuous period of at least six consecutive months beginning or ending in the year. This tax relief (called the northern residents deductions) has two elements: 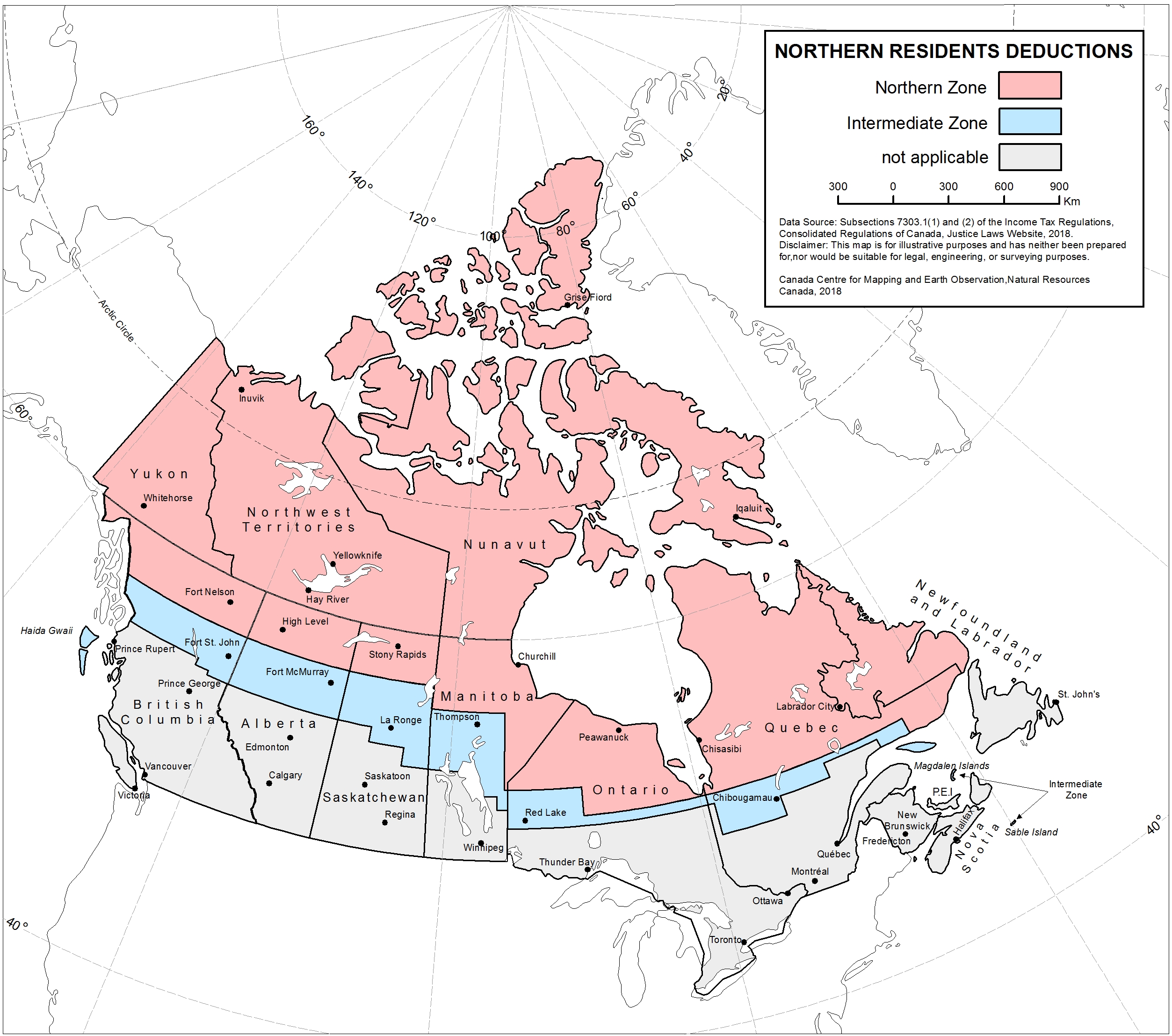 If an employer pays or reimburses an employee for non-work related travel expenses (or pays the employee an allowance), such amounts are generally considered a taxable benefit. The value of any such benefit is included in income on the employee's T4, Statement of Remuneration Paid or T4A, Statement of Pension, Retirement, Annuity, and Other Income issued by the employer for the year in which the amount was paid. The individual is required to pay tax on the amount of these benefits in the same way as if the amounts were provided as salary. Individuals residing in the prescribed zones who received taxable travel benefits from their arm's length employer and incurred expenses for personal travel (including for medical purposes) in that year, are eligible for the travel benefits deduction. The travel benefits deduction may offset all or part of the taxable benefit and the resulting increased amount of taxes that the individual would ordinarily be required to pay on these benefits.

The travel benefits deduction can be claimed for trips taken by the individual, or members of their household living with them at the time of the trip, for vacation, family or medical reasons (maximum of two non-medical trips per person). While the trip must start from a prescribed zone, it does not have to include travel outside of the prescribed northern or intermediate zones to claim the travel benefits deduction. Currently, the maximum deduction for each eligible trip is the lowest of the following three amounts:

These maximum deduction rules, including the list of designated cities, are contained in Section 7304 of the Income Tax Regulations.

The purpose of the lowest return airfare element in the calculation of the travel benefits deduction is to ensure that the amount claimed for each trip is not excessive. As such, the lowest return airfare determination is required for all trips regardless of whether the actual trip involves air travel. This requirement serves a purpose in ensuring fairness in terms of the treatment of taxpayers living in the prescribed zones by putting a cap on the maximum amount that can be claimed.

The lowest return airfare is a rigid target that can change. The current wording of the Income Tax Regulations requires the determination of not only the airfare on the day of the trip, but also that it be the lowest fare available. The CRA recognizes that this can be difficult to identify and that airfare pricing has increased in complexity since the northern residents deductions were introduced in 1987. While it may be easier than ever to determine an airfare amount, the difficulty is in determining if it is the lowest cost airfare available during the day of travel.

Using an airfare amount to the nearest designated city outside the prescribed zones to determine the maximum amount of the travel benefits deduction is a reasonable proxy to reflect the higher costs of travel from the North because the cost of airfare would normally increase for individuals living in more remote regions.

This change would require an amendment to the federal Income Tax Regulations.

Current wording of the relevant portion of the regulations

(c) the lowest return airfare ordinarily available, at the time the trip was made, to the individual for flights between the place in which the individual resided immediately before the trip, or the airport nearest thereto, and the designated city that is nearest to that place.

Proposed new wording of the relevant portion of the regulations

(c) a reasonable amount in respect of return economy airfare for the date of travel that was ordinarily available, within a reasonable amount of time of when the trip was made, for flights between the place in which the individual resided immediately before the trip, or the airport nearest thereto, and the designated city that is nearest to that place.

The proposed regulatory amendment would eliminate both the need to make the determination of the airfare on the actual day of travel and to ensure that it is the lowest available. Instead the taxpayer would be required to determine a reasonable amount in respect of return economy airfare ordinarily available for the date of travel. For example, a claimant can obtain a reasonable airfare amount for the day of travel from a travel website in the days leading up to a trip.

It is anticipated that the additional flexibility provided by the proposed regulatory amendment would reduce the administrative burden for taxpayers claiming the travel benefits deduction, while at the same time maintaining fairness by ensuring that the amount claimed for each trip is not excessive.

It should be noted that no changes are being proposed with regard to what expenses would be considered eligible for the travel benefits deduction. Travel expenses for medical or personal trips that were acceptable to the CRA in the past would continue to be acceptable. All that would change is how the limit on the expenses would be determined and documented.

The reasonable return economy airfare would include mandatory taxes, fees and charges such as sales taxes, airport improvement fees and the Air Travellers Security Charge. The airfare would not include non-mandatory fees such as baggage fees, flight cancellation insurance, or pre-paid meals as is currently the case.

Thank you to all those who provided feedback on this proposed regulatory amendment. The consultation closed on April 17, 2019 and your feedback is being considered.