Last Post, Reveille and Flowers of the Forest are 3 ceremonial compositions used by the Canadian Armed Forces (CAF).

Last Post, Reveille and Flowers of the Forest audio recordings

Last Post, Reveille and Flowers of the Forest sheet music 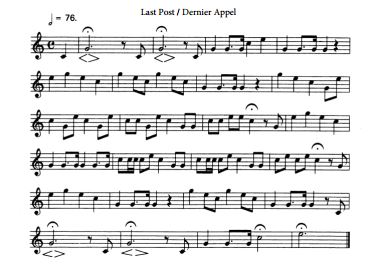 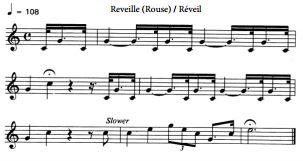 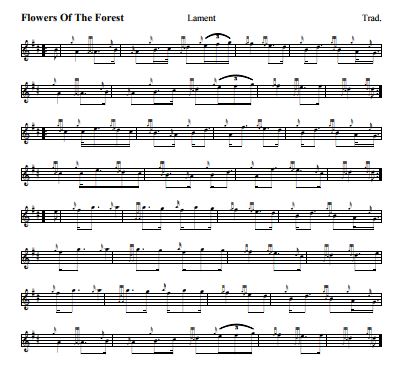 Sheet music for Flowers of the Forest.

How to properly use these musical pieces

We use Last Post and Reveille (Rouse) at Remembrance Day ceremonies. It draws the symbolic association between the soldier's last duty of sitting sentry (death) and his rising above his mortal duties (reveille).

The last note of Last Post marks the beginning of the 2 minutes of silence.

During the silence, do not play any musical instrument, including bagpipes. This would detract from quiet reflection on the service and sacrifice of the dead. Following the 2-minute period of silence, play Rouse. Then lay the official wreaths. During the laying of wreaths, the parade shall be in the stand at ease position.

The History and Heritage Committee met on February 14, 2011, including senior members of each environment. The Committee accepted a proposal for a bagpipe lament during the Remembrance ceremony. You may now play the lament, as long as it respects the 2 minutes of silence. The lament shall be Flowers of the Forest. However, for ceremonies of remembrance at unit level, a suitable Lament shall be played.

Background on these musical pieces

Prior to the mid 19th century, the foot soldier's life was regulated by drumbeats. Later that century, the bugle call was introduced. It conditioned a response from soldiers both for field maneuvers and during camp routine. Certain "calls" were used to order changes in type, direction or speed of attack or withdrawal formations. However, the most used bugle calls were:

The Rouse was used as a "quarter call"; to wake the soldiers 15 minutes before the more formal activity. Reveille, which was a more complicated call by all the buglers, announced the formal activities.

In the early 20th century, there was less need for 2 "wake-up" calls. In 1909, the longer call (Reveille) was omitted and the shorter call (Rouse) was redesignated "Reveille". However, in 1927, the longer call was reinstated. British ceremonial manuals declared that the Rouse would be used for funeral services throughout the Empire. Today, the 2 titles are used interchangeably although the longer of the 2 calls is seldom heard.