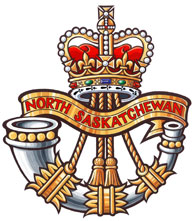 CEDE NULLIS
Yield to None

The North Saskatchewan Regiment (N Sask R) is a Primary Reserve Infantry Unit. We train to augment Regular Force Units, are prepared to provide aide to civilian powers, as well as train individually and collectively as a Unit.

The North Saskatchewan Regiment is always looking to hire intelligent, hardworking people, who want to work as part of a bigger team. Primarily, new members are High School or University students to work one evening a week and one or two weekends a month during the school year. There are also many opportunities for full-time work during the summer months.

This Reserve Force regiment originated on July 3, 1905 and incorporates the following regiments and engineer company.

The North Saskatchewan Regiment originated in Regina, Saskatchewan on July 3, 1905, when The 16th Mounted Rifles was authorized to be formed. It was redesignated: The16th Light Horse” on October 1, 1908; and 16th Canadian Light Horse on March 15, 1920.