The Argyll and Sutherland Highlanders of Canada (Princess Louise’s) 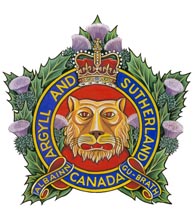 The Argyll and Sutherland Highlanders of Canada (Princess Louise’s) is a unit from the Canadian Forces 31 Canadian Brigade Group, a unique element of the Canadian Forces, whose task is to augment Canada’s military by providing trained light infanteers.

At the end of his long life, one of the Regiment's most distinguished sons turned increasingly to his days as an Argyll and thought little of anything else. Some years earlier, Claude Bissell, a long-time president of the University of Toronto and distinguished scholar, wrote: "… of the regiment as a pattern of memories and as an association of human beings." "Infantry regiments," he thought, "invite this kind of consideration; for an infantry regiment consists of little except human beings ... There are particular ties that bind together human beings in an infantry regiment. People have a natural disposition to be suspicious of higher authority, of the boys in superior echelons who push around papers and hand down impossible directives. The infantry regiment is the queen of battle; it is also the working man with an eternal chip on his shoulder and an indestructible core of cynicism and self-satisfaction."