The Queen's Own Rifles of Canada 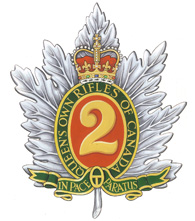 See a list of Canadian Army Weapons and Vehicles.

On the battlefield, “Rifles” are known for their ability to move quickly on foot and unburdened by heavy equipment. Members of “Rifles” regiments are light infantry and are known as “Riflemen”. They are characterized by their ability to apply “Rifleman’s” initiative, expert marksmanship and small unit tactics.

The Queen's Own Rifles of Canada has taken part in every Canadian military campaign, and served with great distinction in World War I and World War II in which 7 Riflemen were awarded the Victoria Cross. Over the past 30 years The QOR of C has provided personnel to support disaster relief in Ontario, Quebec and Manitoba. Riflemen have also served on Expeditionary Operations in Afghanistan, Bosnia Herzegovina, Croatia, Cyprus, Egypt, Iraq, Namibia, Somalia and Sudan.

The QOR of C is the Primary Reserve unit in Canada that is assigned the task of maintaining a Parachute Company. To become a member of the Company, Riflemen must attend specialized parachute training and maintain a high fitness standard. The Parachute Company specializes in conducting Airborne operations in which Riflemen conduct static-line parachuting from an airplane or helicopter with all the equipment required to fight of the battlefield. This is practiced during weekend training exercises. The unit also supports the Royal Canadian Air Force in Trenton when it trains C-130J Hercules Air Crews in parachute operations and the Canadian Army Advanced Warfare Centre (CAAWC) by providing Parachute Packers or Instructors.

The Queen's Own has taken part in every Canadian military campaign, sustaining its first casualties - seven killed in action, two dead of wounds and 21 wounded - fighting the Fenians in the Battle of Ridgeway, June 2, 1866. Since then, in the Red River Expedition, Northwest Rebellion, South African War, two World Wars and the Korean War, the regiment had served and fought with great distinction, losing almost 2,000 men in battle and many thousand wounded. Seven of its soldiers have been awarded the Victoria Cross.