This chapter provides an overview and guidance for CAF members and leadership teams on understanding and recognizing the signs of sexual misconduct, and its impact on individuals, units and the team.

The spectrum of sexual misconduct conceptually represents the range of attitudes, beliefs, and actions that contribute to a toxic work environment. The negative behaviours span from unacceptable conduct in the yellow to Criminal Code violations in the red; even behaviours in the yellow zone could result in a charge under the Code of Service Discipline.

Figure 2: The spectrum of sexual misconduct 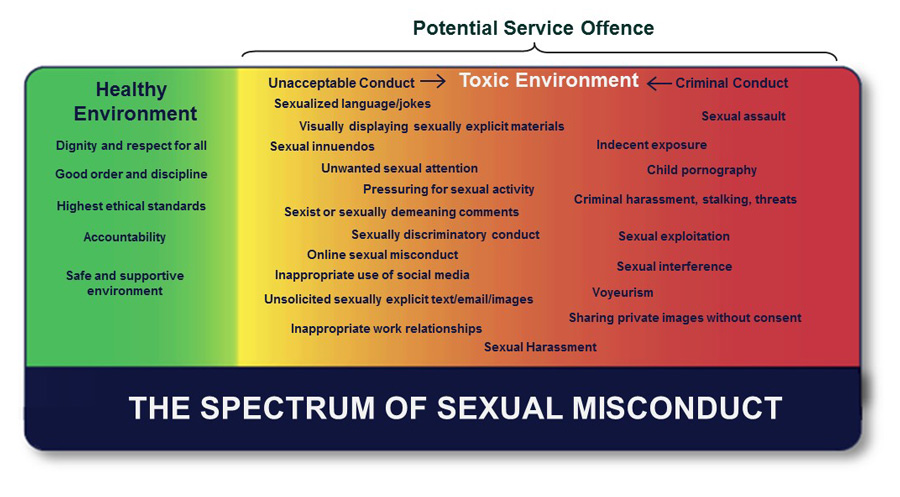 If it's a sexual assault, it means that someone was beaten.

Myth: It’s only sexual assault if there was penetration and if the survivor was beaten and bleeding, or they were threatened with a weapon.

Fact: According to the Criminal Code, sexual assault is any sexual activity without consent, regardless of whether there are physical injuries or a weapon used.

EXAMPLES OF WHAT CAN CONSTITUTE SEXUAL HARASSMENT

In Canada, the vast majority of reported sexual assaults are committed by someone close to the victim.

In most cases of sexual assault, the offender is known to the victim–a supervisor, co-worker, friend, boyfriend, girlfriend, spouse, neighbour, or relative.

In 2007, police forces reported that in 82% of sexual assaults the victim knew the perpetrator.

· 31% of accused were family members;

· 8% were identified as friends;

· 6% were identified as authority figures; and,

· 5% were current or former boyfriends/girlfriends.

Myth: If someone were sexually assaulted, they wouldn’t be talking to the perpetrator the next day.

Fact: There are many reasons why a victim might maintain a relationship with someone who has assaulted them.

The victim might feel their safety would be threatened if they ended the relationship.

The victim may be unable to avoid the perpetrator if they live together, work together, are in class together, or have the same social circles.

Or the victim might still be defining and trying to understand what’s happened to them.

Victims often feel social pressure to act like everything is okay, regardless of how they actually feel.

The important thing to remember is that people cope with traumatic incidents in different ways.

IMPACTS ON THE UNIT

IMPACTS ON THE CAF

Fact: A man’s physical strength does not necessarily protect him from being assaulted.

A sexual assault can be committed through coercion or manipulation, can involve objects, or can be drug- or alcohol-facilitated.

MEN AS SURVIVORS OF SEXUAL ASSAULT

WOMEN AS SURVIVORS OF SEXUAL ASSAULT

Young, physically attractive women are assaulted because of how they look.

Myth: Young, physically attractive women are assaulted because of how they look, or because they dress provocatively, are out alone at night or have been drinking a lot.

Fact: The belief that only young, pretty women are sexually assaulted stems from the myth that sexual assault is based on sex and physical attraction.

Women of all ages and appearances, and of all classes, cultures, abilities, sexualities, races and religions are sexually assaulted.

What a woman was wearing when she was sexually assaulted or how she behaved is irrelevant.

MEMBERS OF THE LGBTQ2+ COMMUNITY AS SURVIVORS OF
SEXUAL ASSAULT

“I am careful–that would never have happened to me.”

Myth: Most victims of sexual assault can prevent the assault from taking place by resisting.

A person might not fight back for any number of reasons, including fear or incapacitation.

Silence or the absence of resistance does not mean that the victim is giving consent.

WHY DO PEOPLE BLAME VICTIMS?

VICTIM-BLAMING IN THE MILITARY

HOW CAN VICTIM-BLAMING AFFECT VICTIMS? 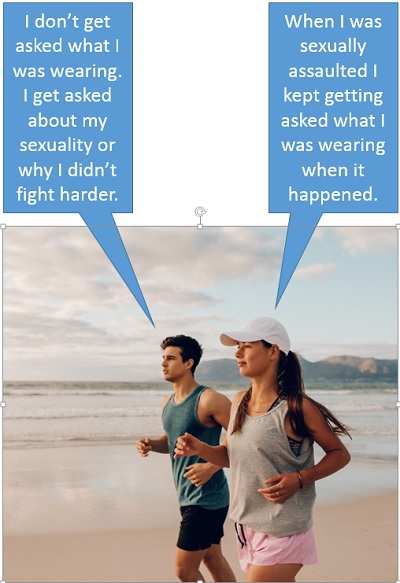 HOW TO AVOID VICTIM-BLAMING

[2] For example, intoxicated, mentally incapacitated, and under the age of consent.

[16] Fear of the negative consequences for reporting was cited by 35% of the Stats Can survey respondents as their main reason for not coming forward.