Biography of the first Director 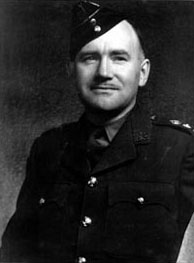 Colonel Stacey, in the uniform of the Royal Canadian Corps of Signals

The first Director of the office that became the Directorate of History and Heritage was Charles Stacey.

Colonel Charles Perry Stacey was born at Toronto in 1906. He began his post-secondary education at the University of Toronto, where he received a B.A. in History in 1924. He earned a second Bachelor's degree from Oxford University in 1929 and a doctorate from Princeton University in 1933. He taught in the Department of History at Princeton from 1933 to 1940.

Colonel Stacey joined the Canadian Corps of Signals in 1924. In November, 1940, he was promoted to Major and appointed Historical Officer at the Canadian Military Headquarters in London, England. He came back to Canada in 1945, when he was appointed Director of the Historical Section of the General Staff.

Colonel Stacey was the Director until he retired from the Army in 1959. He taught at the University of Toronto from 1959 to 1975. In 1965 to1966, Stacey returned to the Department of National Defence to oversee the first year of the integrated Directorate of History.

The Minister of National Defence said on Colonel Stacey's eightieth birthday that “history, in no small measure because of his years of achievements, continues to be a vital part of the Department of National Defence's commitment to Canada.”

Charles Perry Stacey passed away on November 17, 1989, in Toronto.