Aboriginal People in the Canadian Military

This book pays tribute to the military role of indigenous people in Canada. It looks back before Europeans arrived. It explores times of conflict and harmony with newer Canadians. And it highlights the role indigenous people have played in the Canadian Armed Forces. 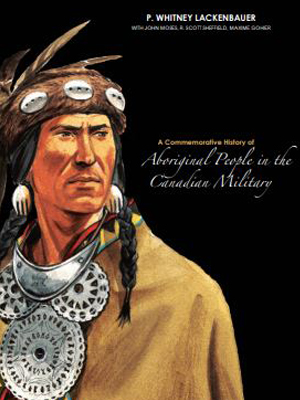 A Commemorative History of Aboriginal People in the Canadian Military

This history on our Aboriginal Peoples and their contribution to Canada’s rich military heritage is the latest in a series of books prepared by the Director of History and Heritage commemorating especial military experience. The idea of this book and initial support to its realization came from the late Lieutenant-General Christian Couture who championed the cause of the Aboriginals in the Forces.

Today, more than 1200 First Nations, Inuit and Métis Canadians serve with the Canadian Forces at home and overseas with the same fervour and pride as their ancestors. Their diversity is extraordinary. They represent over 640 distinct bands, sharing common beliefs and practices, and all unique in themselves. As well, there are 55 languages and distinct dialects that belong to 11 linguistic families.

John Moses is an objects conservator and researcher with the Canadian Museum of Civilization in Gatineau, Quebec. His particular interests are the accommodation of Aboriginal perspectives in mainstream museum practice, and the provision of collections care training to non-specialists. He is a registered member of the Delaware band at the Six Nations of the Grand River at Brantford, Ontario.

R. Scott Sheffield, Ph.D., is an instructor in the Department of History at the University of the Fraser Valley. His major publications include, The Redman’s on the Warpath: The Image of the Indian and the Second World War (2004), A Search for Equity: The Final Report of the National Round Table on First Nations Veterans’ Issues (2001), and a recent edited volume on Aboriginal peoples and military participation in international perspective.

Maxime Gohier holds a Master’s degree in history from l’Université du Québec à Montréal. He is the author of the book, Onontio le médiateur: La gestion des conflits amérindiens en Nouvelle-France (1603-1717), which focuses on the Native American policies of France in North America. He is currently doing doctoral research into the history of the native peoples of Quebec under the British regime.