How we practice sports in Canada today is influenced by a number of factors, including our 4 seasons, and our geographic and social diversity. For example, lacrosse, our national summer sport, has been played by Indigenous peoples for close to 1000 years.

Hockey, our national winter sport, was invented in Canada in the 1800s. Basketball was invented by Canadian Dr. James Naismith in 1891 to condition young athletes during the winter. Our sport system allows people from all segments of Canadian society to get involved in sport activities at all levels and in all forms of participation.

Football – like citizenship – is the ultimate team game. It requires people of every size, strength, and skillset to work together as a team to achieve great things. [Canada’s] new citizens, and our players, are part of a proud history that has made our league and country stronger.

Geraldine Heaney immigrated to Canada from Northern Ireland and became a pioneer in women’s hockey. She was a member of the Canadian national women’s hockey team in the first 7 Women's World Championships, winning gold each time. She’s a 2-time Canadian Olympian (silver in 1998, gold in 2012). She was also inducted into the Hockey Hall of Fame and Canada’s Sports Hall of Fame.

Donovan Bailey immigrated to Canada from Jamaica. He won 2 Olympic golds in sprinting for Canada in 1996 with one run recorded as the fastest time ever recorded by a human. He was also inducted into the Ontario Sports Hall of Fame.

Wally Buono immigrated from Italy to become one of the most legendary coaches in the Canadian Football League (CFL). After playing college football in the United States, he became a linebacker for the Montréal Alouettes. He was head coach and general manager of the Calgary Stampeders and then the BC Lions, where he retired at the end of the 2018 season. Wally’s impressive CFL career spanned a remarkable 46 years.

Israeli-born Denis Shapovalov is the top-ranking Canadian male tennis player and fifteenth in the world. In 2017, he was named the Association of Tennis Professionals’ Newcomer of the Year and most improved player of the year.

Elvis Stojko, of Hungarian/Slovenian descent, represented Canada at the World Figure Skating competitions. He won titles in 1994, 1995 and 1997. He’s also a 2-time Olympic silver medallist at the 1994 and 1998 Olympic Winter Games. Elvis Stojko was inducted into Canada’s Sports Hall of Fame in 2006 and the Canadian Olympic Hall of Fame in 2011. 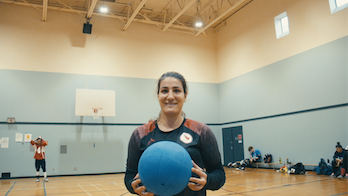 Inspiring the next generation of athletes

Knowing her true potential as a Paralympic athlete, Maryam came to Canada determined to wear the maple leaf and inspire younger athletes. 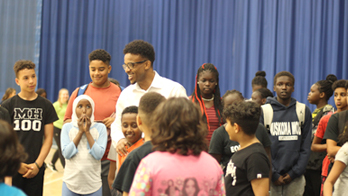