Entry requirements by country or territory

You need to give your biometrics

In most cases, you now need to give your fingerprints and photo (biometrics) after you apply.

Find out who needs to give biometrics.

U.S. citizens must carry proper identification such as a valid U.S. passport.

Lawful permanent residents of the U.S.

As of April 26, 2022, lawful permanent residents of the United States must show these documents for all methods of travel to Canada:

The following travellers need an Electronic Travel Authorization (eTA) to board their flight to Canada. However, these travellers do not need an eTA if entering by land or sea – for instance driving from the U.S. or coming by bus, train, or boat, including cruise ship.

Look on the front cover of your passport for the symbol of a rectangle with a circle in the middle. If you see this symbol, you have an electronic passport. 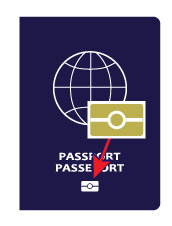 Foreign nationals in the following situations

The following travellers need a visa to come to Canada by any method of travel – plane, car, bus, train, or cruise ship.

Note: Holders of Alien’s passport and Stateless individuals need a visa to visit or transit Canada.

If you’re a worker or student, you must also meet Canada’s entry requirements. A work permit or study permit is not a visa. In most cases, you’ll also need a valid visitor visa or eTA to enter Canada.

If you’re applying for your first study or work permit

We’ll automatically issue you a visa or eTA if you need one and we approve your application. When you travel to Canada make sure you have:

If you already have a work or study permit

If you’re visa-required, make sure that your visitor visa is still valid if you choose to leave Canada and re-enter.

If you need an eTA and you’re flying to a Canadian airport, make sure you travel with the passport that’s electronically linked to your eTA.

You must travel with your valid study or work permit, a valid passport and travel document.

If you’re eligible to work or study without a permit

If you’re eligible to work or study without a permit, you’re considered a visitor to Canada. You must meet the entry requirements for travellers from your country of citizenship.

Visiting your children and grandchildren in Canada

If you’re the parent or grandparent of a Canadian citizen or a Canadian permanent resident, you may be eligible for a super visa. A super visa lets you visit your children or grandchildren for up to 5 years at a time. It’s a visa that provides multiple entries for a period up to 10 years. When you enter Canada, a border services officer will confirm how long you can stay.

How will I know when nationals of my country will need to have biometric screening?