Haemophilus influenzae (Hi) is a bacterium which can cause serious invasive disease primarily in young children. Before the vaccine was developed in 1988, Hi serotype b (Hib) was the most common cause of bacterial meningitis in Canada. The National Advisory Committee on Immunization (NACI) recommends immunization against Hib disease.

Hi disease is caused by a gram-negative coccobacillus that is either encapsulated (typeable) or non-encapsulated (non-typeable). Encapsulated strains are divided into serotypes a through f, depending on the antigenic characteristics of their polysaccharide capsule. These strains are more likely to invade normally sterile sites, causing invasive disease, while non-encapsulated strains generally cause milder infections. Hib is the most pathogenic strain, which caused 95% of the disease before vaccine programs were introduced.

Hi can cause a variety of infections, which range from mild to severe. Infections of the respiratory tract may result in pneumonia and bronchitis, and can lead to infections in the ear, sinuses and eyes.

About 55–65% of affected children developed meningitis. The remaining patients suffered from:

Symptoms of meningitis usually develop 2 to 4 days after infection, and may include:

In infants, the fontanelle may bulge.

Long-term Hib infection effects resulting in meningitis may include:

Hi is transmitted by infected persons through the nasopharynx by contact with respiratory droplets, or nasal or throat discharges. Such contact includes:

The incubation period is unknown, but is probably about 2 to 4 days. Infected persons can transmit disease for as long as Hi bacteria are still present, which may be for a prolonged period. Hi is non-communicable within 24 to 48 hours of starting effective antibiotics.

Hib infections occur worldwide, with a peak incidence in children less than 6 months old in developing countries. In industrialized countries, the peak age is between 6 and 12 months.

Before the widespread use of Hib vaccine, resource-poor countries were most at risk of illness and death from the disease. In the year 2000, the World Health Organization estimates that Hib was responsible for about 8.13 million cases of serious disease in children under 5, and for about 371,000 deaths. The number of countries using the vaccine more than doubled in 2008. As a result, the Hib mortality estimate dropped to 199,000 deaths in children under 5.

For more information on the global distribution of Hib, refer to the World Health Organization.

Globally, invasive Hib disease is most prevalent in children aged 2 months to 2 years. Those most at risk are children who:

Other individuals at increased risk include all transplant and cochlear implant recipients.

Hib infections can be prevented by routine immunization of all children, which NACI recommends at 2, 4 and 6 months old. A fourth dose should be administered between 12 and 23 months of age, and is generally given at 18 months. Hib vaccine is not generally recommended for healthy children after 59 months (5 years). Children 5 and older should receive a single dose of the vaccine if they are at increased risk of invasive Hib disease due to chronic conditions. The same applies to adults.

For further information about the Hib vaccine and its use, refer to the most recent version of the Canadian Immunization Guide and the NACI statements on Haemophilus influenzae type b.

Hi non-b invasive disease became nationally notifiable in 2007. However, not all provinces and territories report invasive Hi non-b disease to the Public Health Agency of Canada, which collects national data. Between 2009 and 2012, the limited national data on Hi non-b show an average incidence of 1.24 per 100,000 population (range 0.96 to 1.40) per year.

Case data obtained from the and the of invasive bacterial diseases. Population data is obtained from Statistics Canada’s annual July 1 estimates. From 1979 to 1985, only Hib meningitis was reportable. After that time, all invasive disease caused by Hib became reportable.

Figure 2: Reported cases and incidence (per 100,000 population) of invasive disease of Haemophilus influenzae (Hi) non-b type in Canada in 2012 by age groupFigure 2 - Footnote †. 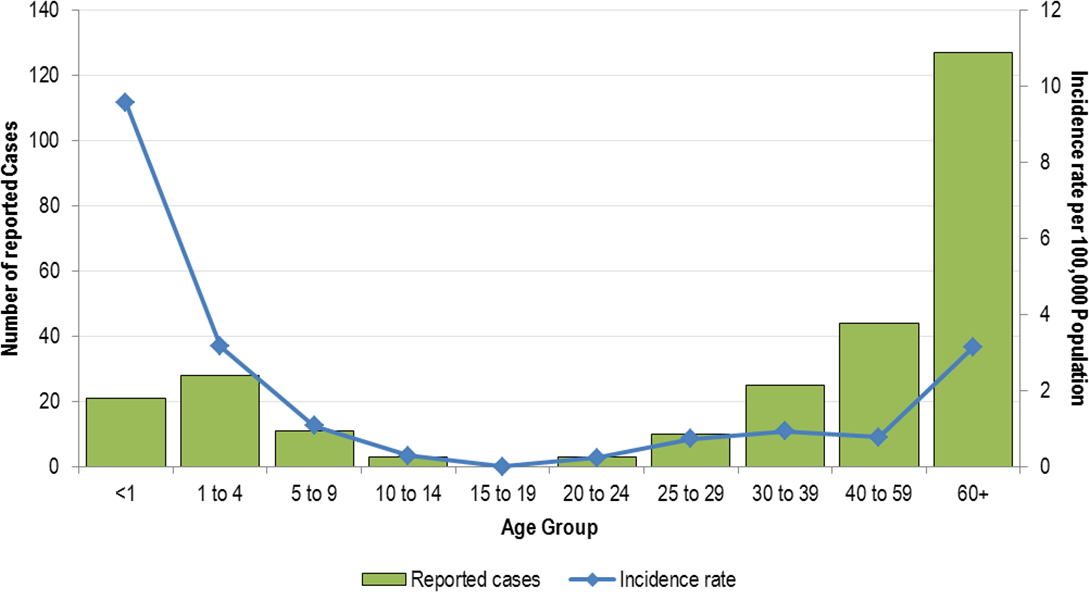 Case data obtained from the and the of invasive bacterial diseases. Population data is obtained from Statistics Canada’s annual July 1 estimates. The population in the jurisdictions who did not report the disease to the CNDSS has been removed for rate calculation.