What should health professionals know about tetanus?

Tetanus is a vaccine-preventable disease caused by a neurotoxin produced by the anaerobic bacterium Clostridium tetani. Tetanus bacteria are found in spore form in soil, dust, manure, and have also been detected in the intestines of animals and humans. Cases of tetanus occur when tetanus spores from the environment are introduced into a wound and grow anaerobically at the site of the injury. Tetanus cases have been reported to be caused by:

In rare cases, tetanus has also occurred after bowel surgery, or aspiration of soil and feces. Neonatal tetanus (tetanus occurring within the first month of life) is associated with nonsterile conditions during childbirth or soon afterwards.

The disease occurs worldwide but is rare in Canada. It is often fatal and affects all age groups. A person infected with the tetanus bacterium typically experiences painful muscle contractions that begin in the neck (hence the popular name lockjaw) and continue down to involve the muscles of the torso.

There is no cure for tetanus. Treatment consists of wound care, medications to ease symptoms, and supportive care. However, tetanus can be prevented through immunization, and rarely occurs in fully vaccinated people. When it does, it is usually mild. The National Advisory Committee on Immunization (NACI) recommends routine childhood immunization against tetanus.

Tetanus (commonly known as lockjaw) is caused by a neurotoxin produced by the tetanus bacterium Clostridium tetani.

C. tetani spores are widely distributed in soil worldwide, and have also been detected in the intestines of animals and humans.

Photos of clinical manifestations of tetanus 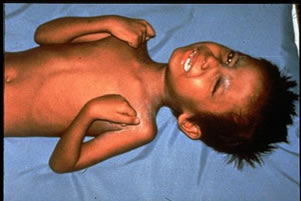 Child with muscle spasms due to tetanus (Source:
Centers for Disease Control and Prevention ©)

Tetanus is characterized by muscle spasms, usually in a descending pattern beginning in the jaw muscles. Symptoms begin with stiffness in the jaw and neck, and difficulty swallowing. Individuals then experience stiffening of the muscles in the arms, stomach and legs, accompanied by painful muscle contractions or spasms. The muscle spasms can be so intense that bones may break. As the disease progresses, prolonged frequent spasms may occur. Unless treatment is provided, serious complications and death may ensue.

The case fatality rate in unvaccinated individuals varies from 10% to over 80%, depending primarily on age (highest in infants and the elderly), and on quality of care.

Tetanus cannot be transmitted from person to person. Tetanus spores in contaminated soil, dust or fecal matter enter the body through a puncture wound, laceration or burn. Oxygen must be absent for C. tetani to survive. This means that the most favourable conditions for the growth and production of the neurotoxin are a deep wound, and/or the presence of dead tissue or a foreign object.

Tetanus occurrence is worldwide. Cases are sporadic and relatively uncommon in industrialized countries, due to:

Tetanus occurs more frequently in agricultural regions, and in areas where:

In many developing countries in Asia, Africa and South America, the disease remains an important cause of death. A total of 10,011 cases of tetanus were reported to the World Health Organization (WHO) in 2012.

Tetanus cases have been associated with lacerations (most frequent), injection drug use, and animal bites. Rare cases have also occurred after bowel surgery, or after aspiration of soil or feces. Diabetes has also been described as a risk factor. Globally, tetanus is common in neonates who are delivered without adequate sterile procedures.

Tetanus may occur following small, insignificant wounds. This is especially the case when necrotic tissue is present, often associated with blunt trauma or deep puncture wounds. Not all cases of tetanus are preceded by a recognized wound or injury. In the United States between 2001 and 2008, there were no wounds or injuries in 22 (9.4%) of 223 cases of tetanus reported. Of these 22 cases, 14 were injection drug users.

Tetanus rarely occurs in fully vaccinated people and, if it does, it is usually mild.

Being fully vaccinated is the best protection against tetanus.

Immunization of all children with a tetanus toxoid-containing vaccine is recommended at 2, 4, 6 and 18 months, with a booster dose at 4 to 6 years.

Teenagers and adults should receive a tetanus booster every 10 years (recommended at 15, 25, 35, 45 years, etc.). Adults who have not previously received a primary series (at least 3 doses) of tetanus toxoid-containing vaccine should receive one dose of Tdap-IPV vaccine followed by two doses of Td-IPV vaccine.

In cases where an individual has been injured, potentially exposed, and suspected of not having sufficient immunity to the bacteria, a vaccine and antitoxin may be administered. The goals of post-exposure prophylaxis are to:

Any unimmunized (or incompletely immunized) individuals who sustain anything more than a minor, clean wound need swift treatment. Both TIg and tetanus toxoid-containing vaccine (as appropriate for age and immunization history) should be given, at different injection sites, using separate needles and syringes. The vaccine series should then be completed, unless contraindicated.

Epidemiology of tetanus in Canada

Tetanus is rare in Canada. During the 1920s and 1930s, between 26 and 55 deaths due to tetanus were reported annually. With the introduction of tetanus toxoid in Canada in 1940, morbidity and mortality rapidly declined (see Figure 1). Between 2000 and 2013 a total of 42 cases were reported, with an average of 3 cases reported per year (range 1 to 8 cases). During this period, persons 60 years of age or greater accounted for 55% of the cases. No cases were reported among neonates. The immunization status of most of the reported cases was not known.
Only six deaths have been reported in Canada since 2000, with the last death reported in 2010.

Text equivalent for figure 1Tetanus cases in Canada by year, 1957–2008

Mortality data was obtained from the Statistics Canada Canadian Vital Statistics Death Database. From 1921 to 1925, reporting provinces and territories included:

Health professionals play a critical role in identifying and reporting cases of tetanus. See the Surveillance section for more information.