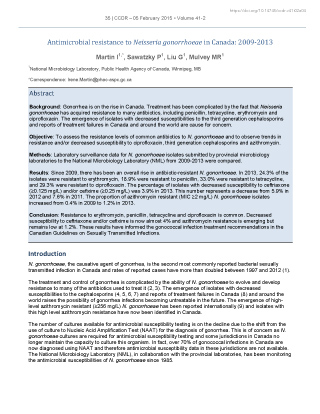 Background: Gonorrhea is on the rise in Canada. Treatment has been complicated by the fact that Neisseria gonorrhoeae has acquired resistance to many antibiotics, including penicillin, tetracycline, erythromycin and ciprofloxacin. The emergence of isolates with decreased susceptibilities to the third generation cephalosporins and reports of treatment failures in Canada and around the world are cause for concern.

Objective: To assess the resistance levels of common antibiotics to N. gonorrhoeae and to observe trends in resistance and/or decreased susceptibility to ciprofloxacin, third generation cephalosporins and azithromycin.

Conclusion: Resistance to erythromycin, penicillin, tetracycline and ciprofloxacin is common. Decreased susceptibility to ceftriaxone and/or cefixime is now almost 4% and azithromycin resistance is emerging but remains low at 1.2%. These results have informed the gonococcal infection treatment recommendations in the Canadian Guidelines on Sexually Transmitted Infections.

N. gonorrhoeae,the causative agent of gonorrhea, is the second most commonly reported bacterial sexually transmitted infection in Canada and rates of reported cases have more than doubled between 1997 and 2012Footnote 1.

The treatment and control of gonorrhea is complicated by the ability of N. gonorrhoeae to evolve and develop resistance to many of the antibiotics used to treat itFootnote 2Footnote 3. The emergence of isolates with decreased susceptibilities to the cephalosporinsFootnote 4Footnote 5Footnote 6Footnote 7 and reports of treatment failures in CanadaFootnote 8 and around the world raises the possibility of gonorrhea infections becoming untreatable in the future. The emergence of high-level azithromycin resistant (=256 mg/L) N. gonorrhoeae has been reported internationallyFootnote 9 and isolates with this high level azithromycin resistance have now been identified in Canada.

The objective of this report is to summarize the trends in antimicrobial resistance to gonorrhea infections in Canada between 2009 and 2013. It is based on the National Surveillance of Antimicrobial Susceptibilities of Neisseria gonorrhoeae Annual Summary 2013 prepared by the NML, Public Health Agency of Canada (PHAC)Footnote 10.

Provincial public health laboratories submitted a total of 5,518 viable N. gonorrhoeae isolates to the NML for antimicrobial susceptibility testing as part of the passive National Neisseria gonorrhoeae Surveillance Program between 2009 and 2013 (2009, N=913; 2010, N=1,233; 2011, N=1,158; 2012, N=1,031; 2013, N=1,183). N. gonorrhoeae isolates are submitted to the NML when the provincial laboratories identify resistance to at least one antibiotic or if the provincial laboratories do not perform any antimicrobial susceptibility testing. Submission of isolates is voluntary and is not standardized across the country. The overall interpretation of the results is difficult due to the limitations related to the isolates available for testing. Therefore, the total number of isolates cultured in all provinces was used as the denominator to calculate resistance proportion (2009, N=3,106; 2010, N=2,970; 2011, N=3,360; 2012, N=3,036; 2013, N=3,195).

MICs were determined by agar dilutionFootnote 11 and resistance was defined according to the Clinical and Laboratory Standards InstituteFootnote 11 except for erythromycinFootnote 12 and azithromycinFootnote 13. Decreased susceptibility breakpoints for ceftriaxone and cefixime were based on WHO definitionsFootnote 14. Common abbreviations for the different types of resistance have been developed (Table 1).

Figure 1 shows the trends of antimicrobial susceptibilities of N. gonorrhoeae tested in Canada from 2009 to 2013.

Of the 3,195 N. gonorrhoeae isolates cultured in public health laboratories across Canada in 2013, 1,183 presumptively resistant isolates were submitted to the NML. Of these, 1,153 were confirmed to be resistant to at least one antibiotic and 30 were susceptible which translates to 36.1% of all N. gonorrhoeae cases diagnosed by culture as resistant N. gonorrhoeae.

Reports of cefixime treatment failures and the observed MIC creep between 2001 and 2010 for both cefixime (from 0.016 mg/L to 0.125 mg/L) and ceftriaxone (from 0.016 mg/L to 0.063 mg/L) led to gonorrhea treatment changes. In 2011, the Canadian STI Guidelines issued updated recommendations for the use of combination gonorrhea therapy with 250 mg ceftriaxone intramuscularly and azithromycin 1 g orally as the first-line regimen in men-who-have-sex-with men (MSM) and in pharyngeal infectionsFootnote 15.

Since the 2011 changes to gonorrhea treatment recommendations in Canada there has been a decrease in the proportion of isolates with elevated MICs to the cephalosporins. In 2011, 7.6% of isolates exhibited decreased susceptibility to ceftriaxone and/or cefixime according to the WHO definition. This decreased to 5.9% in 2012 and further declined to 3.9% of isolates tested in 2013.

Enhancing surveillance to include linked epidemiological and laboratory data will assist with the limitations in the current passive surveillance system regarding data representativeness and interpretation. These improvements to the gonococcal surveillance program are expected with the Enhanced Surveillance of Antimicrobial Resistant Gonorrhea (ESAG) program beginning in 2014.

The full report was prepared by the National Microbiology Laboratory and the Centre for Communicable Diseases and Infection Control, Infectious Disease Prevention and Control Branch, Public Health Agency of Canada. Its publication would not have been possible without the collaboration of all provinces and territories through the Canadian Public Health Laboratory Network (CPHLN), whose continuous contribution to National Neisseria gonorrhoeae Surveillance Program is greatly appreciated.

Barry PM, Klausner JD. The use of cephalosporins for gonorrhoea: The impending problem of resistance. Expert Opin Pharmacother. 2009; 10:555-577.

World Health Organization (WHO). Global action plan to control the spread and impact of antimicrobial resistance in Neisseria gonorrhoeae. 2012. http://www.who.int/reproductivehealth/publications/rtis/9789241503501/en/.