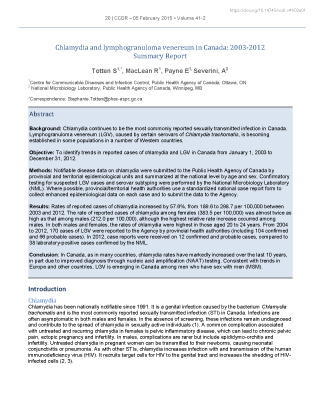 Background: Chlamydia continues to be the most commonly reported sexually transmitted infection in Canada. Lymphogranuloma venereum (LGV), caused by certain serovars of Chlamydia trachomatis, is becoming established in some populations in a number of Western countries.

Objective: To identify trends in reported cases of chlamydia and LGV in Canada from January 1, 2003 to December 31, 2012.

Methods: Notifiable disease data on chlamydia were submitted to the Public Health Agency of Canada by provincial and territorial epidemiological units and summarized at the national level by age and sex. Confirmatory testing for suspected LGV cases and serovar subtyping were performed by the National Microbiology Laboratory (NML). Where possible, provincial/territorial health authorities use a standardized national case report form to collect enhanced epidemiological data on each case and to submit the data to the Agency.

Conclusion: In Canada, as in many countries, chlamydia rates have markedly increased over the last 10 years, in part due to improved diagnosis through nucleic acid amplification (NAAT) testing. Consistent with trends in Europe and other countries, LGV is emerging in Canada among men who have sex with men (MSM).

Chlamydia has been nationally notifiable since 1991. It is a genital infection caused by the bacterium Chlamydia trachomatis and is the most commonly reported sexually transmitted infection (STI) in Canada. Infections are often asymptomatic in both males and females. In the absence of screening, these infections remain undiagnosed and contribute to the spread of chlamydia in sexually active individualsFootnote 1. A common complication associated with untreated and recurring chlamydia in females is pelvic inflammatory disease, which can lead to chronic pelvic pain, ectopic pregnancy and infertility. In males, complications are rarer but include epididymo-orchitis and infertility. Untreated chlamydia in pregnant women can be transmitted to their newborns, causing neonatal conjunctivitis or pneumonia. As with other STIs, chlamydia increases infection with and transmission of the human immunodeficiency virus (HIV). It recruits target cells for HIV to the genital tract and increases the shedding of HIV-infected cellsFootnote 2Footnote 3.

Between 1991 and 1997, the rate of reported cases of chlamydia decreased steadily among both males and females, after which rates began to riseFootnote 4.

Lymphogranuloma venereum (LGV) is an STI caused by C. trachomatis serovars L1, L2 and L3. Infections caused by these serovars preferentially invade lymph tissue and tend to be more invasive than those caused by non-LGV chlamydia. Signs and symptoms include painful, ulcerative proctitis, with inguinal and/or femoral lymphadenopathy or buboes, accompanied by fever, myalgia and arthralgia.

Untreated LGV infection can result in severe complications including destruction of rectal and genital tissue. Although uncommon, in some cases, meningoencephalitis, hepatitis and death can also occur.

LGV is endemic in parts of Africa, Asia, South America and the Caribbean region and was relatively uncommon in Canada until 2003Footnote 5. At that time, outbreaks of LGV began occurring among men who have sex with men in urban centres in CanadaFootnote 6. Outbreaks among MSM have also been reported in European countries and the United StatesFootnote 7Footnote 8Footnote 9Footnote 10. Recent data suggest that the infection has become endemic in the MSM population in some of these countriesFootnote 11. In response to the emergence of LGV in Europe, Canada initiated enhanced surveillance of this STI in 2005 which included retrospective data from 2004.

The objective of this report is to summarize the trends in chlamydia and LGV rates in Canada between 2003 and 2012. It is based on the Report on Sexually Transmitted Infections in Canada: 2012 prepared by the Centre for Communicable Diseases and Infection Control of the Public Health Agency of Canada (PHAC) (available online)Footnote 12 and a supplementary statement on LGVFootnote 13.

Data on laboratory-confirmed chlamydia cases were reported to the Canadian Notifiable Disease Surveillance System (CNDSS) by provincial and territorial health authorities according to the Agency's Case Definitions for Communicable Diseases under National SurveillanceFootnote 14 (see box below). Data are submitted in a variety of formats (e.g., line-listed electronic, paper-based case reports, or aggregate data) and are verified and loaded into the CNDSS database by Agency personnel.

Confirmatory testing for suspected LGV cases is performed by the National Microbiology Laboratory (NML) by nucleic acid amplification testing (NAAT) and data on these cases are then shared with the Centre for Communicable Disease and Infection Control (CCDIC). Diagnosis of probable cases is based on serological testing alone and is done at provincial laboratories. Where possible, provincial/territorial health authorities use a standardized national case report form to collect enhanced epidemiological data on confirmed and probable cases and submit the data directly to CCDIC. At the current time, it is not possible to link case report forms on confirmed cases submitted to CCDIC with their corresponding NML data.

Laboratory evidence of infection in genitourinary and extra-genital specimens:

Chlamydia data extracted from the CNDSS were analyzed by CCDIC staff. Rates were calculated by age group and sex using population estimates obtained from the Statistics Canada Demography Division. Rate change calculations were made on unrounded figures for greater precision.

Surveillance is considered to be within the mandate of F/P/T programs and does not constitute human research; therefore, no research ethics board approval was sought.

Increases in the rates of reported cases of chlamydia have been observed in Canada over the last decade. There are several factors that must be taken into account when considering these data.

The introduction of more sensitive nucleic acid amplification testing (NAAT) in the mid-1990s undoubtedly led to an increase in the number of chlamydia cases detected. NAAT allows urine specimens to be used rather than swabs, which are easier to collect and more acceptable to patients. As a result, the number of people, particularly males, who go for testing has likely increased as well. More effective screening and contact tracing may have a similar effectFootnote 15Footnote 16. A recent estimation of chlamydia disease burden in Canada found that observed increases in chlamydia prevalence could be explained by effective case finding and expansion of screening programsFootnote 17.

Over time, the rate of reported cases of chlamydia has consistently been approximately twice as high in females as in males; however, this disparity is much more pronounced in younger age groups. Younger women are biologically more susceptible to chlamydial infectionFootnote 18Footnote 19. In addition, women are more likely to be screened for STIsFootnote 20Footnote 21.

Trends in LGV infection are difficult to interpret due to gaps in available data, but there is evidence that it is becoming endemic among MSM in Canada. Early surveillance efforts were intensive, followed by a period of time (2007-2009) when few cases were reported. The more recent increase in cases beginning in 2010 and continuing into 2012 likely reflects improved case finding and reportingFootnote 22.

National guidelines for the prevention and management of chlamydial infections are availableFootnote 2Footnote 23 and treatment guidelines for LGV have recently been updatedFootnote 13.

McKay A, Barrett M. Rising reported rates of chlamydia among young women in Canada: What do they tell us about trends in the actual prevalence of the infection? Can J Hum Sex. 2008;17(1-2):61-69.