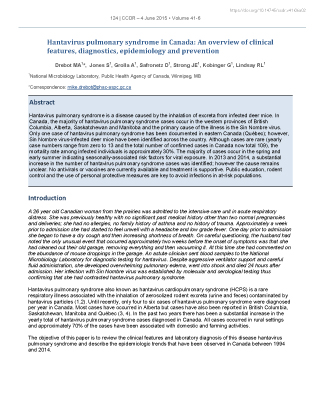 Hantavirus pulmonary syndrome in Canada: An overview of clinical and diagnostic features, epidemiology and prevention

Hantavirus pulmonary syndrome is a disease caused by the inhalation of excreta from infected deer mice. In Canada, the majority of hantavirus pulmonary syndrome cases occur in the western provinces of British Columbia, Alberta, Saskatchewan and Manitoba and the primary cause of the illness is the Sin Nombre virus. Only one case of hantavirus pulmonary syndrome has been documented in eastern Canada (Québec); however, Sin Nombre virus-infected deer mice have been identified across the country. Although cases are rare (yearly case numbers range from zero to 13 and the total number of confirmed cases in Canada now total 109), the mortality rate among infected individuals is approximately 30%. The majority of cases occur in the spring and early summer indicating seasonally-associated risk factors for viral exposure. In 2013 and 2014, a substantial increase in the number of hantavirus pulmonary syndrome cases was identified; however the cause remains unclear. No antivirals or vaccines are currently available and treatment is supportive. Public education, rodent control and the use of personal protective measures are key to avoid infections in at-risk populations.

A 26 year old Canadian woman from the prairies was admitted to the intensive care unit in acute respiratory distress. She was previously healthy with no significant past medical history other than two normal pregnancies and deliveries; she had no allergies, no family history of asthma and no history of trauma. Approximately a week prior to admission she had started to feel unwell with a headache and low grade fever. One day prior to admission she began to have a dry cough and then increasing shortness of breath. On careful questioning, the husband had noted the only unusual event that occurred approximately two weeks before the onset of symptoms was that she had cleaned out their old garage, removing everything and then vacuuming it. At this time she had commented on the abundance of mouse droppings in the garage. An astute clinician sent blood samples to the National Microbiology Laboratory for diagnostic testing for hantavirus. Despite aggressive ventilator support and careful fluid administration, she developed overwhelming pulmonary edema, went into shock and died 24 hours after admission. Her infection with Sin Nombre virus was established by molecular and serological testing thus confirming that she had contracted hantavirus pulmonary syndrome.

The objective of this paper is to review the clinical features and laboratory diagnosis of this disease hantavirus pulmonary syndrome and describe the epidemiologic trends that have been observed in Canada between 1994 and 2014.

The Sin Nombre virus is a member of the Hantavirus genus (Family Bunyaviridae)Footnote 7Footnote 8. The Bunyaviridae family is comprised of a large and diverse group of RNA viruses with a tripartite genome composed of S, M and L segments. The family is currently composed of five genera, Orthobunyavirus, Nairovirus, Phlebovirus, Tospovirus and Hantavirus, all of which contain viruses of agricultural or medical importance. The hantavirus genus was conceived in 1983 and currently, the International Committee on the Taxonomy of Viruses recognizes more than 20 unique species within the hantavirus genusFootnote 7Footnote 8. Approximately half of these species are associated with human diseases such as hemorrhagic fever with renal syndrome and hantavirus pulmonary syndrome. Spill-over is very rare and each hantavirus species is typically associated with a single rodent reservoir; co-evolution with rodent hosts has probably occurred for thousands and perhaps millions of yearsFootnote 8Footnote 9.

Sin Nombre virus is most frequently associated with inhalation of contaminated excreta. This is primarily from deer mice urine and less often with fecesFootnote 4Footnote 10Footnote 11Footnote 12 (Figure 1). The virus is also found in saliva and therefore bites are a potential route of transmission; however, few cases directly associated with mouse bites have been documented. Person-to-person transmission of hantavirus pulmonary syndrome has not been documented in North America but has been associated with Andes hantavirus infections in Chile and ArgentinaFootnote 9. Interestingly, person-to-person transmission of Andes hantavirus occurs mainly in family clusters and transmission risk is associated with close contact activities including sexual contact during the disease prodrome; nosocomial infections are rare but have been reportedFootnote 13. The incubation period of hantavirus pulmonary syndrome has been determined to be between 9 and 33 days with a median time of symptom onset of 14 to 17 days post-exposure, although incubation periods between 46 to 51 days have been reported (Footnote 14, Drebot, unpublished observation).

Clinical illness is characterized by a febrile illness (>38.3° C) with bilateral diffuse interstitial edema that radiographically resemble acute respiratory distress syndrome. Respiratory compromise requiring supplemental oxygen often develops within 72 hours of hospitalizationFootnote 1. Thrombocytopenia and elevated hematocrit levels are highly sensitive and specific features in detecting hantavirus pulmonary syndrome in suspect patientsFootnote 16. Three to six days after the onset of initial symptoms the patient will enter the cardiopulmonary phase, typically manifesting with cough and shortness of breath; pulmonary edema and deterioration of cardiopulmonary function may then rapidly occur over the ensuing 24 hours. Death can occur within 48 hours due to respiratory failure, myocardial dysfunction and shock. Those who get through the cardiopulmonary phase proceed to the third (diuretic) phase and their prognosis is much better. Over two to four days, these patients rapidly improve, their symptoms resolve and so does their pulmonary edema. The final convalescent phase can last for months with persistent weakness, fatigue and abnormal pulmonary functionFootnote 1Footnote 4.

There are no proven antiviral therapies for hantavirus pulmonary syndrome and vaccines are currently not availableFootnote 17. Clinical management depends on careful fluid administration and ventilatory support. If available, the use of extracorporeal membrane oxygenation for advanced hantavirus pulmonary syndrome is a consideration. Generally extracorporeal membrane oxygenation is reserved for advanced hantavirus pulmonary syndrome and has historically been associated with poor survival rates. The procedure has been used with a significant degree of success at the University of New Mexico with almost 70% of severe cases recovering after treatment but must be initiated quickly once advanced shock or respiratory failure developsFootnote 14Footnote 17.

Risk factors for infection with hantaviruses usually include involvement in outdoor activities such as rural- and forest-related activities, peridomestic infestation of premises by rodents, exposure to potentially infected dust and outdoor military trainingFootnote 18. Case-control studies in the US, have identified peridomestic cleaning, agricultural activities and increased numbers of small mammals within households as risk factors for hantavirus pulmonary syndromeFootnote 19Footnote 20 as well as entering or cleaning rarely used, rodent-infested structuresFootnote 21. Key components of prevention are focused on safe rodent handling, disinfection and rodent exclusion methodsFootnote 22 and disease prevention is primarily delivered through public education. Personal risk reduction measures include recognizing rodents / evidence of rodent infestation, preventing rodents from entering the home, use of appropriate procedures (e.g., ventilation) and the use of personal protective equipment and disinfectants when cleaning or entering areas contaminated with mouse droppingsFootnote 3Footnote 22.

Laboratory criteria for diagnosis includes any of the following: presence of hantavirus-specific IgM or a fourfold or greater increase in IgG antibody titres, a positive reverse transcriptase-polymerase chain reaction (RT-PCR) amplification of viral RNA, or a positive immunohistochemical result for hantavirus antigen in a patient's tissue. Isolation of the virus from clinical samples is difficult and is not usually carried out during investigations of suspect casesFootnote 1Footnote 4Footnote 14.

Two imported cases of hantavirus pulmonary syndrome (one each from Bolivia and Argentina) have also been reported in CanadaFootnote 4Footnote 29. One of the imported cases involved a Canadian who had travelled to Argentina and became ill a week after arriving back at his residence in Saskatchewan. The individual was diagnosed by serological testing as having been exposed to a hantavirus and died shortly after being identified as an hantavirus pulmonary syndrome case. The patient had spent several weeks in Argentina, however it was possible that the individual had been infected upon his return to Canada. Determining the country where he was actually exposed could not be initially verified due to the possible serological cross reactivity of Canadian and South American hantaviruses. The identification and phylogenetic characterization of hantavirus RNA in the patient's blood clots verified that the infection was associated with an Argentinean hantavirus related to the Andes virus lineage. The use of PCR and amplicon sequencing not only verified the country in which the patient was exposed to the virus but also provided a timeline that indicated an incubation period of over a month between exposure and symptom onset. Similar molecular epidemiology procedures were used to identify the imported case from BoliviaFootnote 29.

Although genetic identification and characterization of the infecting virus is not always possible, when appropriate samples (e.g., acute whole blood) are available and polymerase chain reaction amplicon sequencing is performed, Sin Nombre virus has always been identified as the etiological agent of hantavirus pulmonary syndrome in Canada. Consistent with previous phylogenetic characterization of Sin Nombre virus from infected deer mice in Canada, the genotype of the virus associated with hantavirus pulmonary syndrome cases corresponds with a western Canadian genogroup / clade (Footnote 28 Grolla et al, unpublished observation). Field investigations involving the comparisons of virus sequences from mice collected near where patients have resided / worked have demonstrated a high degree of genetic relatedness and in certain instances exact matches (Drebot and Lindsay, unpublished observation). The ability to identify mice carrying the strain of virus associated with a hantavirus pulmonary syndrome case may assist in distinguishing among multiple sites of possible exposures (including verification of imported cases). The elegant epidemiological investigation conducted by Jay et al. 1995Footnote 30 demonstrates the utility that molecular epidemiology has to improve our understanding of the risk factors (and point sources for infection) associated with hantavirus infectionFootnote 31.

Hantavirus pulmonary syndrome is a rare disease; however, there has been a surge in cases noted in the last two years indicating that there continues to be a risk for infection in Canadian localities where the virus circulates. The majority of exposures to Sin Nombre virus result in severe disease, but hantavirus infections should also be considered in the differential diagnosis for nonspecific febrile illness. This is especially relevant for persons with known exposure to rodents or their excreta, usually as a result of cleaning, rodent-infested structures in western CanadaFootnote 3. In addition, it is possible that cases without severe pulmonary involvement may have gone undiagnosed for a minority of patientsFootnote 24Footnote 25Footnote 27 .

Hantavirus pulmonary syndrome is a rare rodent-borne disease that occurs primarily in western North America, Central America and South America. Prevention of this disease can be achieved through public education about the risks associated with exposure to rodents and their excreta and the use of appropriate preventive practices. Public health authorities should continue to update and modify existing messaging in order to enhance the uptake of key protective behaviours by at-risk populations in Canada. Travellers should also be reminded of the risk of hantaviruses and actions to prevent infection while abroad as imported cases of hantavirus pulmonary syndrome have been reportedFootnote 4Footnote 29. Several key research questions remain unanswered including why the number of HPS cases have increased in recent years as well as why the majority of cases occur in the western provinces (and states) despite the fact that Sin Nombre virus-infected deer mice have been identified across Canada.

The authors wish to acknowledge the Canadian provincial public health laboratories for their assistance in the investigation and documentation of hantavirus pulmonary syndrome cases and the technical assistance of Melissa David in helping generate the figures in this article.