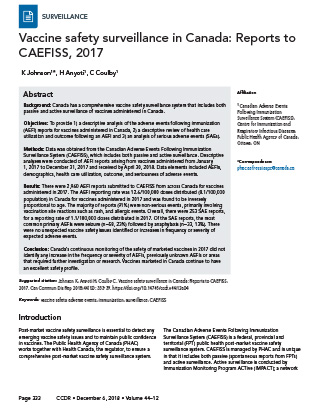 Background: Canada has a comprehensive vaccine safety surveillance system that includes both passive and active surveillance of vaccines administered in Canada.

Results: There were 2,960 AEFI reports submitted to CAEFISS from across Canada for vaccines administered in 2017. The AEFI reporting rate was 12.6/100,000 doses distributed (8.1/100,000 population) in Canada for vaccines administered in 2017 and was found to be inversely proportional to age. The majority of reports (91%) were non-serious events, primarily involving vaccination site reactions such as rash, and allergic events. Overall, there were 253 SAE reports, for a reporting rate of 1.1/100,000 doses distributed in 2017. Of the SAE reports, the most common primary AEFIs were seizure (n=58, 23%) followed by anaphylaxis (n=33, 13%). There were no unexpected vaccine safety issues identified or increases in frequency or severity of expected adverse events.

Conclusion: Canada’s continuous monitoring of the safety of marketed vaccines in 2017 did not identify any increase in the frequency or severity of AEFIs, previously unknown AEFIs or areas that required further investigation or research. Vaccines marketed in Canada continue to have an excellent safety profile.

The Canadian Adverse Events Following Immunization Surveillance System (CAEFISS) is a federal, provincial and territorial (FPT) public health post-market vaccine safety surveillance system. CAEFISS is managed by PHAC and is unique in that it includes both passive (spontaneous reports from FPTs) and active surveillance. Active surveillance is conducted by Immunization Monitoring Program ACTive (IMPACT); a network of 12 pediatric hospitals across Canada that screens hospital admissions for specific adverse events following immunizations (AEFIs). The primary objectives of CAEFISS are to

In Canada, health care providers, manufacturers and the public each have a role to play in vaccine pharmacovigilance Footnote 2. The FPT public health officials monitor vaccine safety through the Vaccine Vigilance Working Group (VVWG) of the Canadian Immunization Committee (CIC). The VVWG includes representatives from all FPT immunization programs across the country as well as Health Canada regulators and IMPACT. This report was developed with input and support from the VVWG.

National reports on vaccine safety surveillance data have been published periodically Footnote 3Footnote 4. The objective of this report is to provide a) a descriptive analysis of AEFI reports for vaccines administered in Canada in 2017, b) a descriptive review of health care utilization and outcome following an AEFI and c) an analysis of serious adverse events (SAEs).

An AEFI is defined as any untoward medical occurrence that follows immunization but that does not necessarily have a causal relationship with the administration of the vaccine. The adverse event may be a sign, symptom or defined illness Footnote 5.

A SAE in CAEFISS is identified based on the International Conference on Harmonization of Technical Requirements for Registration of Pharmaceuticals for Human Use as an event that results in death, is life-threatening, requires in-patient hospitalization or prolongation of existing hospitalization, results in persistent or significant disability/incapacity or results in a congenital anomaly/birth defect. Any medical event which may not be immediately life-threatening but requires intervention to prevent one of the outcomes listed above may also be considered as serious Footnote 6.

The CAEFISS is an FPT collaborative process that includes submission of AEFI reports from both passive and active surveillance. Passive surveillance is initiated at the local public health level. Completed reports are first sent to provincial and territorial (PT) health authorities and are then submitted on a voluntary basis to PHAC for inclusion into CAEFISS Footnote 7. In addition, CAEFISS also receives reports from federal authorities (Indigenous Services Canada, Correctional Services Canada, Royal Canadian Mounted Police, National Defence and the Canadian Armed Forces). These reports are entered into CAEFISS and a copy and/or reporter information is sent to the health authorities of the jurisdiction of origin.

Active surveillance is conducted by IMPACT nurse monitors, under the supervision of pediatric and/or infectious disease medical specialists, who screen hospital admissions for target AEFIs that may have followed vaccination and that led to a hospital admission Footnote 8Footnote 9.

Descriptive analyses are conducted using SAS Enterprise Guide software, Version 5.1 (Cary, North Carolina, US) Footnote 13. Calculations were presented for all vaccines combined to calculate the overall rate by doses distributed for the year 2017 as well as rates by year (2007–2017), type of surveillance, primary reason for reporting, primary AEFI by seriousness and health care utilization and outcome for vaccines administered in 2017. Sex- and age-specific rates were calculated using population estimates as the denominator. Missing data were excluded from the calculations.

While only 7% (n=116) of all submitted AEFI reports in children less than 18 years of age were through active surveillance, they represented 56% (n=116) of all SAE reports submitted for this age group (Note: Data not shown; numbers do not completely correspond to the percentages as the percentages have been rounded to the nearest integer). This distribution is consistent with previous years Footnote 4.

Of the 2,960 reports, 60% of reports were in females. As shown in Figure 2, male predominance was observed for children under seven years of age and female predominance was observed among those seven years of age and older. Two age groups had a significant difference between female and male reporting rates: the 18 to 64 year age group had a rate ratio (RR) of 4.6 (95% confidence interval [CI] 3.86 to 5.49; p<0.05) and the 65 and older age group had a RR of 2.6 (95% CI 2.02 to 3.35; p<0.05), indicating that submitted AEFI reports were over four and a half times and two and half times more likely to be in females, respectively.

During the medical case review process, a primary AEFI category is assigned as the main reason for reporting and is further classified to a sub-category. Excluding the ‘other’ category, the most common primary AEFIs reported for vaccines administered in 2017 were vaccination site reactions (n=1,339, 45%) followed by allergic reaction (n=417, 14%) and rash alone (n=346, 12%) (Table 1).

The proportion of serious events was highest for the neurological event category (44%), followed by infection/syndrome/systemic symptoms (ISS) (22%). Of note, vaccination errors included only a small number of reports (fewer than five AEFI reports) and no serious reports.

Figure 3 shows the distribution of AEFIs by primary reason by age group. Vaccination site reactions represented the greatest number of AEFIs for all the age groups except for children less than one year of age. Excluding the “other” event category for children under one year of age, the most commonly reported AEFI was rash alone, followed by vaccination site reactions (Figure 3).

The outcome at time of reporting for all AEFI reports is shown in Table 3. Full recovery was reported in 75% of the reports and less than 0.1% of reports reported death as an outcome. For those not fully recovered at the time of reporting, the reports are revised if updated information is received by CAEFISS from the provinces and territories.

Overall there were 253 SAE reports out of over 23 million vaccine doses distributed during the reporting period. This represents a reporting rate of 1.1/100,000 doses distributed and 9% of all AEFI reports for the 2017 time period. Figure 4 shows the distribution of SAE reports by reason for seriousness, with hospitalization (n=192) and life threatening events (n=49) being the most common reasons.

Among the SAE reports, the most frequently reported primary AEFI was seizure (n=58, 23%), followed by anaphylaxis (n=33, 13%). The majority (n=183, 72%) of SAE reports had fully recovered at the time of reporting. For those patients who had not fully recovered at the time of reporting, these reports were revised if updated information was received by CAEFISS from the provinces and territories. Other outcomes for SAE reports included fatal outcome (n=4, 2%), permanent disability/incapacity (n=1, 0.4%), unknown outcome (n=15, 6%) and missing information on outcome (n=5, 2%).

The majority of SAEs were in children and adolescents less than 18 years of age (81%), with almost three quarters (74%) of these SAEs being reported in children under the age of two years.

There were two deaths in those less than two years of age and two deaths in those 18 years of age and older. After careful review, all deaths were considered to be a result of pre-existing conditions (heart surgery, serious injury, cardiovascular disease, diabetes and hypertension) and not to the vaccines administered. There was also one reported outcome of disability that occurred in an individual. The medical history was reviewed for this individual and it was concluded, based on the information provided, that the disability was not considered to be related to the administered vaccine.

In 2017, the overall annual AEFI reporting rate was 12.6/100,000 doses distributed or 8.1/100,000 population, with a statistically significant downward trend in reporting rates over the last 11 years. There are several possible explanations for the declining overall rate of AEFI reporting. It may be due to under-reporting, variations in the reporting of expected milder events, or differences in vaccine uptake.

The majority of reports (91%) was due to non-serious events and differed with age, with rash being more common in infants and vaccination site reactions more common in the elderly. Male predominance was observed for children under seven years of age and female predominance was observed among those seven years and older. The results of a greater proportion of reports involving females is similar to other findings where females in the adult population were found to consistently report more adverse events Footnote 3Footnote 4Footnote 17. The reported sex differences by age may also be explained in part by higher vaccine coverage in female adults Footnote 18. The majority of SAEs occurred in children and adolescents, which may in part be explained by IMPACT, which actively searches for specific surveillance targets in children admitted to 12 pediatric tertiary care hospitals Footnote 9Footnote 19. The greater proportion of SAEs seen in children under two years of age is likely due in large part to the number of vaccines provided to this age group to protect them when they are most vulnerable to vaccine-preventable diseases. Although the percentage of SAEs increased from 8% (between 2013 and 2016) to 9% (in 2017), this increase may be due to a decrease in the reporting of non-serious AEFIs. The 2017 SAE reporting rate was consistent with previously reported rates and there were no unexpected vaccine safety issues identified Footnote 4.

Passive surveillance for AEFIs is subject to limitations such as underreporting, over reporting, lack of certainty regarding the diagnostic validity of a reported event, missing information regarding other potential causes such as underlying medical conditions or concomitant medications and the differing AEFI reporting practices by jurisdictions within Canada.

There are also limitations associated with active surveillance. The IMPACT uses predetermined AEFI targets (such as seizure), which may limit its ability to identify new adverse reactions to immunizations. In addition, IMPACT focuses on admitted pediatric cases, which means that only the most serious cases are detected. Lastly, IMPACT is not comprehensive, as it covers only 90% of Canada’s tertiary care pediatric beds and hospital admissions Footnote 19Footnote 20. Despite these limitations, IMPACT is able to fulfill an important role in vaccine safety surveillance by actively identifying targeted serious AEFIs in the pediatric population.

Canada’s continuous monitoring of the safety of marketed vaccines in 2017 did not identify any increase in the frequency or severity of AEFIs, or identify previously unknown AEFIs. The majority of reported AEFIs were both expected and mild in nature. Vaccines marketed in Canada continue to have an excellent safety profile.

Finally, we would like to thank each individual who took the time to submit an AEFI report for their contribution to vaccine safety in Canada.

This work was funded by the Public Health Agency of Canada.

Figure A1: Proportion of adverse events following immunization reports by active versus passive surveillance in children less than 18 years of age, 2017