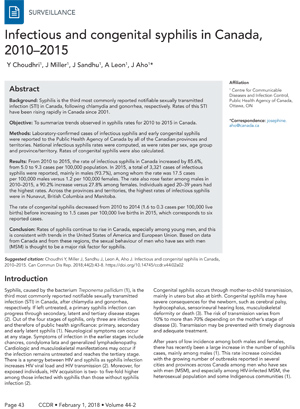 Infectious and congenital syphilis in Canada, 2010–2015

Background: Syphilis is the third most commonly reported notifiable sexually transmitted infection (STI) in Canada, following chlamydia and gonorrhea, respectively. Rates of this STI have been rising rapidly in Canada since 2001.

Objective: To summarize trends observed in syphilis rates for 2010 to 2015 in Canada.

Conclusion: Rates of syphilis continue to rise in Canada, especially among young men, and this is consistent with trends in the United States of America and European Union. Based on data from Canada and from these regions, the sexual behaviour of men who have sex with men (MSM) is thought to be a major risk factor for syphilis.

Syphilis, caused by the bacterium Treponema pallidumFootnote 1 is the third most commonly reported notifiable sexually transmitted infection (STI) in Canada, after chlamydia and gonorrhea, respectively. If left untreated, a primary syphilis infection can progress through secondary, latent and tertiary disease stagesFootnote 2. Out of the four stages of syphilis, only three are infectious and therefore of public health significance: primary, secondary and early latent syphilisFootnote 1. Neurological symptoms can occur at any stage. Symptoms of infection in the earlier stages include chancres, condyloma lata and generalized lymphadenopathy. Cardiologic and musculoskeletal manifestations may occur if the infection remains untreated and reaches the tertiary stage. There is a synergy between HIV and syphilis as syphilis infection increases HIV viral load and HIV transmissionFootnote 2. Moreover, for exposed individuals, HIV acquisition is two- to five-fold higher among those infected with syphilis than those without syphilis infectionFootnote 2.

Congenital syphilis occurs through mother-to-child transmission, mainly in utero but also at birth. Congenital syphilis may have severe consequences for the newborn, such as cerebral palsy, hydrocephalus, sensorineural hearing loss, musculoskeletal deformity or deathFootnote 3. The risk of transmission varies from 10% to more than 70% depending on the mother's stage of diseaseFootnote 3. Transmission may be prevented with timely diagnosis and adequate treatment.

After years of low incidence among both males and females, there has recently been a large increase in the number of syphilis cases, mainly among malesFootnote 1. This rate increase coincides with the growing number of outbreaks reported in several cities and provinces across Canada among men who have sex with men (MSM), and especially among HIV-infected MSM, the heterosexual population and some Indigenous communitiesFootnote 1.

The objective of this article is to summarize observed trends in reported laboratory-confirmed infectious syphilis and congenital syphilis rates in Canada in the period 2010 to 2015. Rates were analyzed by sex, age and geographic distribution.

Variables submitted along with the diagnosis include sex, age at time of diagnosis, year of diagnosis and province/territory of diagnosis. All stages are notifiable but only infectious stages (primary, secondary and early latent) were included in this report. The received data were validated in collaboration with the corresponding province or territory. Data from January 1, 2010 to December 31, 2015 were available from all provinces and territories and were extracted from the CNDSS in July 2017.

Descriptive analysis was performed using Microsoft Excel. National annual reported case rates of infectious syphilis were computed per 100,000 population (or per males or females) for all years using number of cases from the CNDSS as numerators, and Statistics Canada yearly population estimates as denominators. Sex, age group and province/territory-specific rates were also calculated. For congenital syphilis, rates were computed per 100,000 live births. For 2014 and 2015, preliminary numbers of live births drawn from Statistics Canada were used, as final numbers were not yet available. No statistical procedures were used for comparative analyses. Small numbers are more susceptible to change and so corresponding rates should be interpreted with caution. Previous reports may provide different rates for some years due to reporting delays and data updating.

The three provinces with the highest reported rates of laboratory-confirmed syphilis in 2015 and the highest rate increases from 2010 to 2015 were Nunavut, British Columbia and Manitoba (Table 1). The greatest rate decreases were seen in the Northwest Territories, Saskatchewan and New Brunswick.

The number of laboratory-confirmed cases of congenital syphilis reported in Canada varied from one to six cases per year in 2010–2015 (Table 2).

In Canada, the rates of reported cases of infectious syphilis markedly increased from 2010 to 2015. The burden of syphilis seems to be disproportionately placed on men. Other high-income countries such as the United States of America (USA), Australia and the United Kingdom have reported similar increases in numbers of cases and ratesFootnote 6Footnote 7Footnote 8.

The very high number of cases among males is thought to be mainly because of an increase in cases among MSMFootnote 1. Newfoundland and Labrador and Manitoba are among the provinces with the highest increases over 2010–2015. These provinces have reported that increased diagnoses among MSM was the main factor driving rates upwardsFootnote 9Footnote 10. This is of concern as syphilis contraction increases the probability of acquiring and transmitting HIVFootnote 1. A greater increase of reported syphilis cases has been observed among MSM living with HIV than among noninfected MSM in both Western Europe and the USAFootnote 11.

The causes of the increase in the rate of syphilis among MSM are multifactorial and complex. Changing community norms and behaviours as well as new preventive interventions such as pre-exposure prophylaxis (PrEP) might explain this rise. Many MSM have adopted behaviour patterns such as serosorting (choosing to have condomless sex with partners with the same HIV status) or having condomless oral sex, with the intention of decreasing HIV transmissionFootnote 12Footnote 13. However, the lowered condom use might increase the risk of contracting other STIsFootnote 13Footnote 14. In a Toronto-based study, condomless anal sex with casual partners in the previous six months was associated with syphilis infection among MSM living with HIVFootnote 15. Also of concern is the fact that Internet-based social media are increasingly being used to easily find sex partners. This may promote concurrent partnerships and rates of acquisition of new partners and decrease intervals between sex partnersFootnote 16. The social mixing patterns with the use of saunas, and the consumption of recreational drugs that may impair judgment in making decisions about sexual acts are also risk factors for acquisition and transmission of syphilis and other STIsFootnote 16Footnote 17. Lastly, increased risk-taking behaviours and a rise in STI incidence have been reported among HIV-negative MSM using PrEPFootnote 18Footnote 19Footnote 20. In Canada, PrEP was not significantly used in 2010–2015. However, data from other countries and from research studies highlight the importance of frequent STI screening of MSM on PrEP to ensure that symptomatic and asymptomatic STIs are treated in a timely way to halt transmission, as PrEP use increases over timeFootnote 21.

This finding highlights the importance of public health action to mitigate transmission of syphilis and identify new risk groups, such as MSM on PrEP.

This finding highlights the importance of universal screening of pregnant women in a context of syphilis resurgence in Canada, as recommended by the Canadian Guidelines on Sexually Transmitted InfectionsFootnote 1.

This surveillance report presents a national portrait of the current infectious syphilis epidemiology and was based on data from all provinces and territories. It describes sex, age and province/territory-specific rates over a six-year period.

Some limitations of the data should be noted. First, some numbers of cases of infectious and congenital syphilis were low. This leads to less stable rates, especially for congenital syphilis for which less than 10 cases were reported annually in Canada in 2010–2015. Therefore, variations in rates over time should be interpreted with caution. Second, these figures likely underestimate the incidence rate of syphilis from 2010 to 2015 as some infections may be asymptomatic, unscreened, undiagnosed or unreported. Screening, laboratory testing and reporting practices are heterogeneous across provinces and territories, and reports to the PHAC of syphilis cases by stage vary between provinces/territories. Therefore, we were not able to calculate valid stage-specific rates or to report on the number of cases of specific conditions such as neurosyphilis. Likewise, although age structures may vary across provinces and territories, we did not perform standardization by age. Therefore, direct comparison between provinces should be made with caution.

Trend analysis on the data was not performed, which is a limitation of this report. Lastly, risk factors and clinical presentation are not available in this surveillance system, preventing identifying risk factors associated with the observed increased rates.

In conclusion, syphilis rates in Canada have risen markedly over time. Males make up the vast majority of syphilis cases, and based on data from Canada, USA, Australia and other countries, MSM are one of the groups at highest risk. A better understanding of transmission dynamics and social and sexual networking is needed to guide prevention efforts.

It would not have been possible to publish this report without the continuous and greatly appreciated contribution of all provinces and territories.

Appendix: Case definitions of confirmed cases of infectious and congenital syphilisFootnote a

Laboratory confirmation of early latent syphilis infection (<1 year after infection):
An asymptomatic patient with reactive serology (treponemal and/or non-treponemal) who, within the previous 12 months, had one of the following:

Quebec's definition requires the use of two tests including a treponemal one for a diagnostic of primary, secondary or early latent syphilis

Return to footnote a referrer