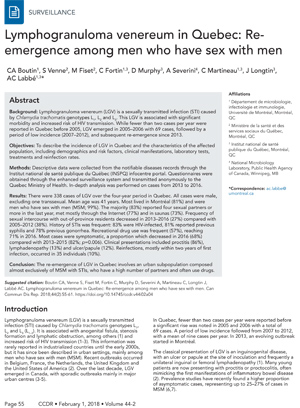 Lymphogranuloma venereum in Quebec: Re-emergence among men who have sex with men

Background: Lymphogranuloma venereum (LGV) is a sexually transmitted infection (STI) caused by Chlamydia trachomatis genotypes L1, L2 and L3. This LGV is associated with significant morbidity and increased risk of HIV transmission. While fewer than two cases per year were reported in Quebec before 2005, LGV emerged in 2005–2006 with 69 cases, followed by a period of low incidence (2007–2012), and subsequent re-emergence since 2013.

Objectives: To describe the incidence of LGV in Quebec and the characteristics of the affected population, including demographics and risk factors, clinical manifestations, laboratory tests, treatments and reinfection rates.

Methods: Descriptive data were collected from the notifiable diseases records through the Institut national de santé publique du Québec (INSPQ) infocentre portal. Questionnaires were obtained through the enhanced surveillance system and transmitted anonymously to the Quebec Ministry of Health. In-depth analysis was performed on cases from 2013 to 2016.

Conclusion: The re-emergence of LGV in Quebec involves an urban subpopulation composed almost exclusively of MSM with STIs, who have a high number of partners and often use drugs.

Lymphogranuloma venereum (LGV) is a sexually transmitted infection (STI) caused by Chlamydia trachomatis genotypes L1, L2 and L3 (L1–3). It is associated with anogenital fistula, stenosis formation and lymphatic obstruction, among othersFootnote 1 and increased risk of HIV transmissionFootnote 1Footnote 2Footnote 3. This information was rarely reported in industrialized countries until the early 2000s, but it has since been described in urban settings, mainly among men who have sex with men (MSM). Recent outbreaks occurred in Belgium, France, the Netherlands, the United Kingdom and the United States of AmericaFootnote 2. Over the last decade, LGV emerged in Canada, with sporadic outbreaks mainly in major urban centresFootnote 3Footnote 4Footnote 5.

In Quebec, fewer than two cases per year were reported before a significant rise was noted in 2005 and 2006 with a total of 69 cases. A period of low incidence followed from 2007 to 2012, with a mean of nine cases per year. In 2013, an evolving outbreak started in Montréal.

The classical presentation of LGV is an inguinogenital disease, with an ulcer or papule at the site of inoculation and frequently a unilateral inguinal or femoral lymphadenopathyFootnote 1. Many young patients are now presenting with proctitis or proctocolitis, often mimicking the first manifestations of inflammatory bowel diseaseFootnote 2. Prevalence studies have recently found a higher proportion of asymptomatic cases, representing up to 25–27% of cases in MSMFootnote 6Footnote 7.

In 2014, the Public Health Agency of Canada (PHAC) revised its recommendations to encourage LGV genotyping on positive C. trachomatis specimens among asymptomatic MSM with risk factors, regardless of sampled site this was further updated in 2017 to focus on rectal specimens onlyFootnote 3. Following expert advice from the Institut national de santé publique du Québec (INSPQ)Footnote 8 systematic genotyping of all positive rectal specimens for C. trachomatis (regardless of symptomatology) was implemented in June 2016 (the value of this strategy will be assessed after two years). The INSPQ also provides guidelines on treatment of cases and partnersFootnote 8.

Given the growing epidemic, enhanced surveillance of LGV cases was pursued in Quebec with the goal of implementing targeted public health interventions.

The objective of this article is to describe the Quebec 2013–2016 LGV epidemic and present epidemiologic data including demographic details, risk factors, clinical manifestations, laboratory tests, treatment and reinfection.

Until 2005, LGV was part of routine surveillance and notifiable to public health authorities. In 2005, PHACFootnote 9 and the Quebec Ministry of Health initiated an enhanced surveillance system for LGV, whereby when a case is notified, key epidemiologic and clinical information are collected by public health nurses who contact the attending physicians or the patients directly. The nurses administer an epidemiologic questionnaire to collect information about patient demographics (age, sex, area of residence), risk factors (number, sex and meeting context of partners; history of sexually transmitted or blood-borne infections [STBBIs]; drug use), clinical presentation, laboratory tests performed and treatment information. In an attempt to prevent missing any data, epidemiologic questionnaires were revised over the surveillance period and medical teams were contacted, if necessary.

For this present surveillance report, descriptive data for all LGV cases in Quebec from 2013 to 2016 were collected from the notifiable diseases database through the INSPQ infocentre portal and enhanced surveillance questionnaires were transmitted anonymously to the provincial Ministry of Health for compilation and analysis. Surveillance definitions changed over time. In 2013–2014, confirmed cases included:

In 2015, genotyping alone became sufficient to consider a case confirmed and clinical manifestation or contact with a case were no longer required. Probable cases included patients who presented with proctitis or inguinal/femoral lymphadenopathy or had a contact with a confirmed LGV case and had a positive test for C. trachomatis from an appropriate clinical specimenFootnote 10.

All cases notified in 2013–2016 were investigated to identify any previous episodes since January 1, 2005. A reinfection was defined as a second infection in the same individual occurring at least 90 days after the first episodeFootnote 12.

Data were analyzed for all 338 cases (or cases for which information was available for a specific variable) notified between 2013 and 2016, excluding one transsexual case (man to woman). Data were analyzed with statistical software Epi Info version 7.2.0.1 and Stata 64 (version 10.1). Proportions were compared using the x2 test. The epidemiologic portrait presented here focuses on the 2013–2016 outbreak in Quebec, with parallels to preceding years (i.e. 2005–2012) only where appropriate.

The number of LGV genotyping tests performed on positive C. trachomatis samples (males and females, all sampling sites, regardless of symptoms) at the Laboratoire de santé publique du Québec are shown in Table 3. Overall, 13% of C. trachomatis samples typable by multiplex PCR assay were genotypes L1–3. Some patients had more than one positive sample for a single episode. An important increase in the number of requests was noted in 2016 as a result of the recommendation to systematically genotype all rectal samples positive for C. trachomatis.

The reason for requesting testing was known for 302 of the 338 reported cases. The reasons included presence of symptoms (n=221; 73%); screening based on risk factors (n=68; 23%); and contact with a confirmed LGV case (n=12; 4%). DNA sequencing was conducted for 93% (n=314) of cases: 304 were L2b, whereas 10 typed as L2, due to a single nucleotide mutation in the genotyping target of the ompA gene. Retrospective sequencing of the pmpH gene suggests that these cases were due to a variant of the L2b genotype.

Incidence of LGV, which occurs within a core group of MSM living in an urban setting, has been increasing in Quebec over the last four years. The MSM population is characterized by a significant past history of STBBIs, especially HIV, a high number of sexual partners and frequent drug use. Our data show a high prevalence of proctitis as the presenting symptom, with very few classical inguinogenital diseases. The majority of the cases were diagnosed as L2b genotypes, a variant isolated as far back as the 1980s in San FranciscoFootnote 13. A number of studies of LGV outbreaks across Europe reported a population of high-risk MSM similar to what we found in the current Quebec outbreakFootnote 2. A large percentage of men are HIV and/or hepatitis C positive and very few cases, if any, are detected in heterosexual men or women. Asymptomatic cases have been detected, but the vast majority of cases present with symptoms of rectal infectionFootnote 14Footnote 15Footnote 16Footnote 17Footnote 18Footnote 19.

The LGV rate remains relatively low in comparison with other common STIs including non-LGV C. trachomatis infections. In 2015, among males aged 15–75 years in Quebec, the annual incidence rates of infectious syphilis (17.2/100,000 person-year) and gonococcal infection (69.4/100,000 person-year) were significantly higher than those of LGV (2.6/100,000 person-year)Footnote 20. As LGV is thought to be more often symptomatic than syphilis or gonococcal infection, it could be speculated that those who become infected are more likely to seek medical attention and get treatment, restricting transmission. For now, LGV is also confined to a smaller subgroup of MSM, while gonococcal and non-LGV C. trachomatis infections also involve the heterosexual population. However, the incidence prior to 2014 was likely underestimated given the exclusion of asymptomatic patients in previous case definitions. The higher proportion of asymptomatic cases in 2016 can also be partly explained by the systematic genotyping of all positive C. trachomatis rectal specimens, which started in June 2016 in Quebec.

The presented clinical manifestations are in line with recent literature reporting proctitis and proctocolitis as the most common presentationFootnote 2Footnote 21. Although systematic genotyping for LGV is currently performed in Quebec only for rectal specimens, there is some evidence suggesting that extrarectal LGV (pharyngeal and urethral infections) could be a potential contributor to the ongoing outbreak. In 2014, van Rooijen et al.Footnote 22 collected pharyngeal swabs from MSM and found that 1% were C. trachomatis positive; of these, 53% did not have concomitant anogenital infection. The implication of pharyngeal as well as urethral LGV in transmission of the epidemic strain remains unclear. Rectal infections have been shown to be far more common in various LGV prevalence studiesFootnote 23Footnote 24Footnote 25Footnote 26. It is thus arguable that extrarectal screening would not be a cost-effective measure.

A significant improvement in adequate first prescribed treatment has been noted in 2016, possibly following educational efforts towards physiciansFootnote 3Footnote 8. The province-wide genotyping of positive rectal C. trachomatis specimens implemented in 2016 could have contributed to improvements in case management by shortening diagnostic delays, from a mean of 30 days in 2014Footnote 9 to 12 days in 2016 (data not shown).

A specific subpopulation seems to be at greater risk of reinfection with higher rates of HIV infection, in line with potentially riskier sexual behaviours as shown in other reportsFootnote 27Footnote 28. In an attempt to describe this specific subpopulation, Rönn et al.Footnote 12 found repeaters to be more likely to be infected by HIV and HCV, and to have a concomitant gonococcal infection compared with patients with a single episode of LGV. It remains unclear if serosorting, the strategy by which MSM have unprotected sexual encounters with seroconcordant partners, has a role to play in nurturing the present outbreak, as hypothesized for other STIs with higher incidence within this specific groupFootnote 29Footnote 30.

The national enhanced LGV surveillance, conducted between 2004 and 2012, received 170 case reports from provincial and territorial health authorities (including 104 confirmed and 66 probable cases)Footnote 5. Confirmed cases were reported from Quebec, Ontario, Alberta and British Columbia; probable cases were reported from these provinces as well as one from Nova ScotiaFootnote 5.

This study provides recent surveillance data on LGV in Quebec with a high number of cases. Description of risk factors contributes to understanding the current outbreak and its sexual network. Limitations include the descriptive nature and lack of standardization of the questionnaires, both over time and across the different administrative regions, as well as some missing information. Data collecting forms have since been revised and medical teams contacted to allow better standardization. Information regarding HIV follow-up (i.e. treatment, viral load, CD4, etc.) were unfortunately not available.

The re-emergence of LGV in Quebec involves a core group of MSM with history of STIs, most being HIV-seropositive, with multiple partners and substantial drug use. Sporadic transmission outside of Montréal and relatively frequent reinfections highlight the potential for a further spread; this is of particular significance given the associated morbidity. The transmission among HIV-infected patients is of concern given the implication of unprotected sexual encounters within the LGV-affected population as well as the increased risk of HIV transmission associated with inflammation of rectal mucosa seen in LGV proctitisFootnote 1Footnote 2Footnote 3. Enhanced surveillance helps monitor and better describe this subgroup in order to tailor public health actions to reduce the risk of LGV transmission. A clinical tool for LGV was released in October 2017 to assist medical teams with LGV screening, diagnosis, treatment, follow-up and partners' medical careFootnote 31. The systematic genotyping of rectal specimen positive for C. trachomatis proved useful at identifying asymptomatic patients. An analysis of the cost effectiveness of such a strategy would inform future public health actions.

AS – Genotyping by direct sequencing, writing – review and editing

This epidemiologic study was supported by the provincial public health organizations that participated in data collection and analysis.