Echinococcus tapeworm in coyotes and domestic dogs in Winnipeg 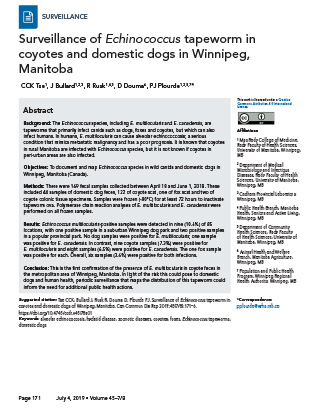 Surveillance of Echinococcus tapeworm in coyotes and domestic dogs in Winnipeg, Manitoba

Background: The Echinococcus species, including E. multilocularis and E. canadensis, are tapeworms that primarily infect canids such as dogs, foxes and coyotes, but which can also infect humans. In humans, E. multilocularis can cause alveolar echinococcosis; a serious condition that mimics metastatic malignancy and has a poor prognosis. It is known that coyotes in rural Manitoba are infected with Echinococcus species, but it is not known if coyotes in peri-urban areas are also infected.

Methods: There were 169 fecal samples collected between April 18 and June 1, 2018. These included 44 samples of domestic dog feces, 122 of coyote scat, one of fox scat and two of coyote colonic tissue specimens. Samples were frozen (-80°C) for at least 72 hours to inactivate tapeworm ova. Polymerase chain reaction analyses of E. multilocularis and E. canadensis were performed on all frozen samples.

Conclusion: This is the first confirmation of the presence of E. multilocularis in coyote feces in the metropolitan area of Winnipeg, Manitoba. In light of the risk this could pose to domestic dogs and human health, periodic surveillance that maps the distribution of this tapeworm could inform the need for additional public health actions.

Echinococcus species are tapeworms that primarily infect canid species. The two predominant species that have been found in Canada are E. multilocularis and E. canadensis. The sylvatic lifecycle of Echinococcus tapeworms includes coyotes and other canids as definitive hosts and rodents as intermediate hosts. Humans, however, can be incidental (or dead-end) hosts (Figure 1). E. multilocularis can cause a serious disease in humans: alveolar echinococcosisFootnote 1Footnote 2. This infection, which behaves like a metastatic malignancy, has a high case-fatality rate and requires radical surgical and long-term anthelminthic treatmentFootnote 3. Although a more benign infection in humans, E. canadensis is also maintained via a sylvatic lifecycle that includes wolves, coyotes, and dogs as definitive hosts and caribou, moose and elk as intermediate hosts. In humans, as incidental hosts, the predominant clinical presentation is cystic hydatid disease primarily in the liver, which may require surgical intervention that carries the risk of severe anaphylaxis should cyst rupture occurFootnote 2. These two species are not infrequently found together given they share definitive canid hosts. Echinococcus species tapeworms are asymptomatic and cause no disease in canids, and they are hard to detect, as the worms are only 1–7 mm in length.

The World Health Organization and the Food and Agriculture Organization of the United Nations have ranked alveolar echinococcosis as the third most important food-borne parasitic disease of global importanceFootnote 4. As there is no cost-effective way to eliminate E. multilocularis in the sylvatic lifecycle, surveillance is important for human risk assessment.

Echinococcus multilocularis ova are quite resistant and can survive and remain infective for nearly one year under favorable conditionsFootnote 5. As the ova are sticky, they can adhere to the fur of dogs, wild vegetation and garden produce that is grown in feces-contaminated soilFootnote 2Footnote 6Footnote 7. Transmission to humans typically occurs when the hand comes in contact with water, soil, fur or objects contaminated with host feces, followed by inadvertent hand to mouth transfer of the ova. Following human ingestion of E. multilocularis ova, there is a long clinical latency period; from five to 15 years. Early symptoms include abdominal pain, which is followed by jaundice and eventually by severe hepatic dysfunctionFootnote 2Footnote 8. Alveolar echinococcosis is often mistaken for a neoplastic growth, given its propensity for widespread organ infiltration with metastasesFootnote 2. E. multilocularis may also imitate other diseases, including hepatic carcinoma, cirrhosis and tuberculosis, which may lead to improper diagnostic testing and delayed treatmentFootnote 3Footnote 9Footnote 10. Diagnosis is confirmed based on a combination of clinical findings, epidemiological data, imaging, histopathology and/or nucleic acid detection and serologyFootnote 8. Recommended treatment is radical surgical resection of the parasitic lesion, which in early stages may lead to a complete cure; however, surgical resection can sometimes be incomplete due to the diffuse or undetected spread of the parasiteFootnote 2Footnote 8. As such, post-surgical anthelminthic chemotherapy is recommended for at least two years followed by a minimum of 10 years of close monitoringFootnote 8. If untreated, mortality is 90% within 10 years of onset of symptomsFootnote 11. Early diagnosis and proper treatment has been shown to improve survivalFootnote 12.

Echinococcus tapeworms have been documented in canids in Canada for many years. A study on the prevalence of E. multilocularis in Manitoba canid species, performed 40 years ago in Riding Mountain National Park, found that almost one quarter of all coyotes sampled were infectedFootnote 13. More recently in 2009, an European strain of E. multilocularis was discovered in central British Colombia in a domestic dog with no history of travel outside Canada, with further research suggesting the possible establishment of this new strain in the local wildlifeFootnote 14Footnote 15. There may be evidence of a similar strain in the wildlife of SaskatchewanFootnote 16. Surveys in Calgary and Edmonton published in 2012 determined that E. multilocularis was present in the wild canid populations of those citiesFootnote 1. Furthermore, in Ontario, recent detections of alveolar echinococcosis in several domestic dogs with no known travel history outside of Ontario suggest that E. multilocularis tapeworms may have established a foci in southwestern Ontario as wellFootnote 17Footnote 18.

The aim of this study was to determine the extent of Echinococcus species ova, especially E. multilocularis, in coyote, fox and domestic dog feces found in the metropolitan area around Winnipeg, and to perform geospatial mapping to determine at-risk areas.

The Winnipeg metropolitan area (WMA) was defined as Census Metropolitan Area 602 based on the 2016 census profile from Statistics CanadaFootnote 22. This consists of the urban area, demarcated by the circumferential perimeter highway surrounding Winnipeg and the peri-urban area that lies outside the perimeter highway and within the WMA. Eighty-five collection sites were identified that covered a wide area of the WMA, including areas frequented by humans and domestic dogs as well as areas with known coyote sightings.

Samples from wild canids (mostly coyotes) were predominantly collected by driving along remote roads near coyote habitat based on local knowledge of coyote sightings. Coyote samples were identified via characteristics of the scat sample including shape, texture, presence of hair and bone belonging to small animals as well as supporting features including coyote tracks, nearby coyote dens and previous sightingsFootnote 20. Similarly the fox scat sample was differentiated by the local conservation officer by its smaller size and the fact there had been known fox sightings nearby.

All fecal samples were picked up individually with plastic bags, sealed and labelled with date of collection, location of collection [Global Positioning System (GPS) coordinate, postal code or address]. For domestic dog samples, the name and phone number of the dog owner was also noted. Two colon samples from carcasses of coyotes were submitted by local wildlife conservation officers who retrieved the colon from two unique animals. Samples were stored at -80°C for at least 72 hours to inactivate E. multilocularis ova. The colonic samples were scraped on the mucosal surface to retrieve fecal matter.

The target gene for the real-time PCR tests was the mitochondrial gene rrnL. Six quality controls, including PCR positive and negative controls, negative extraction controls, environmental contamination control, spike-in internal positive control and pan-bacterial 16 ssrRNA internal sample control, were run to monitor for extraction efficiency, sample matrix inhibitors and cross contamination in the diagnostic runs. This PCR assay specific for Echinococcus species is in the process of being validated and peer reviewed. It was used in this study as it had successfully confirmed a clinical case of E. multilocularis of a dog in Ontario (personal communication January 11, 2019, Dr. Roxanne Chan, IDEXX Laboratories, Inc.).

Limitations of this study include the short duration of surveillance, possible repeated sampling from the same canids and the use of a molecular assay that is still undergoing peer reviewFootnote 23. No characteristics of the domestic dogs were collected, such as if they were outdoor dogs or consumed rodents. The wild canid scat sampling method was targeted and so does not reflect a uniform collection across the entire region. A much larger sample size and longer surveillance timeframe would be required to more fully map the extent of E. multilocularis canid infection in the Winnipeg metropolitan area.

Implications and next steps

Our findings indicate a risk of human and domestic dog exposure to coyote feces infected with E. multilocularis in the urban and peri-urban areas of Winnipeg.

Based on the evidence of E. multilocularis in the environment in several provinces and the recent human cases in Alberta and Manitoba, further studies are indicated. To better characterize prevalence and geographic distribution, research with more locations and samples, spatial analysis and in-province molecular diagnostic capabilities are indicated. If warranted, a human seropositivity study of E. multilocularis in affected regions could be considered.

This emerging issue is particularly amenable to a One Health approachFootnote 27 involving physicians, veterinarians and wildlife experts. Ontario has made E. multilocularis infection in domestic dogs and humans reportable, in order to monitor the extent of the infectionFootnote 28Footnote 29. Although currently not notifiable elsewhere, it would be useful to report on the investigation of human alveolar echinococcosis cases, including any travel history (to confirm locally acquired disease versus imported from foreign countries) and information regarding the potential route of exposure to E. multilocularis ova. Public education concerning preventative measures to avert domestic dog and human infections may be indicated.

Echinococcus multilocularis has been documented in Canada for decades in the wild canid population, but human cases have been extremely rare. Over the last two decades, there has been a tendency for wild canids to migrate closer to urban populations, and there have been several recent human cases of alveolar echinococcosis caused by E. multilocularis. Although our study did not identify any cross contamination between coyotes and dogs in Winnipeg, the risk of exposure to E. multilocularis in urban and peri-urban settings suggests increased awareness and further study would help front line clinicians and public health officials be alert to and monitor this risk.

The results and conclusions are those of the authors and no official endorsement by Manitoba Health, Seniors and Active Living, or Manitoba Agriculture is intended or should be inferred.

This study received support for CCK Tse, who completed a Med 2 Summer Student Research Project from April to August 2018.

Government of Manitoba. Living with Wildlife in Manitoba (Accessed 2018-08-03). www.gov.mb.ca/sd/wildlife/problem_wildlife/coyote.html.